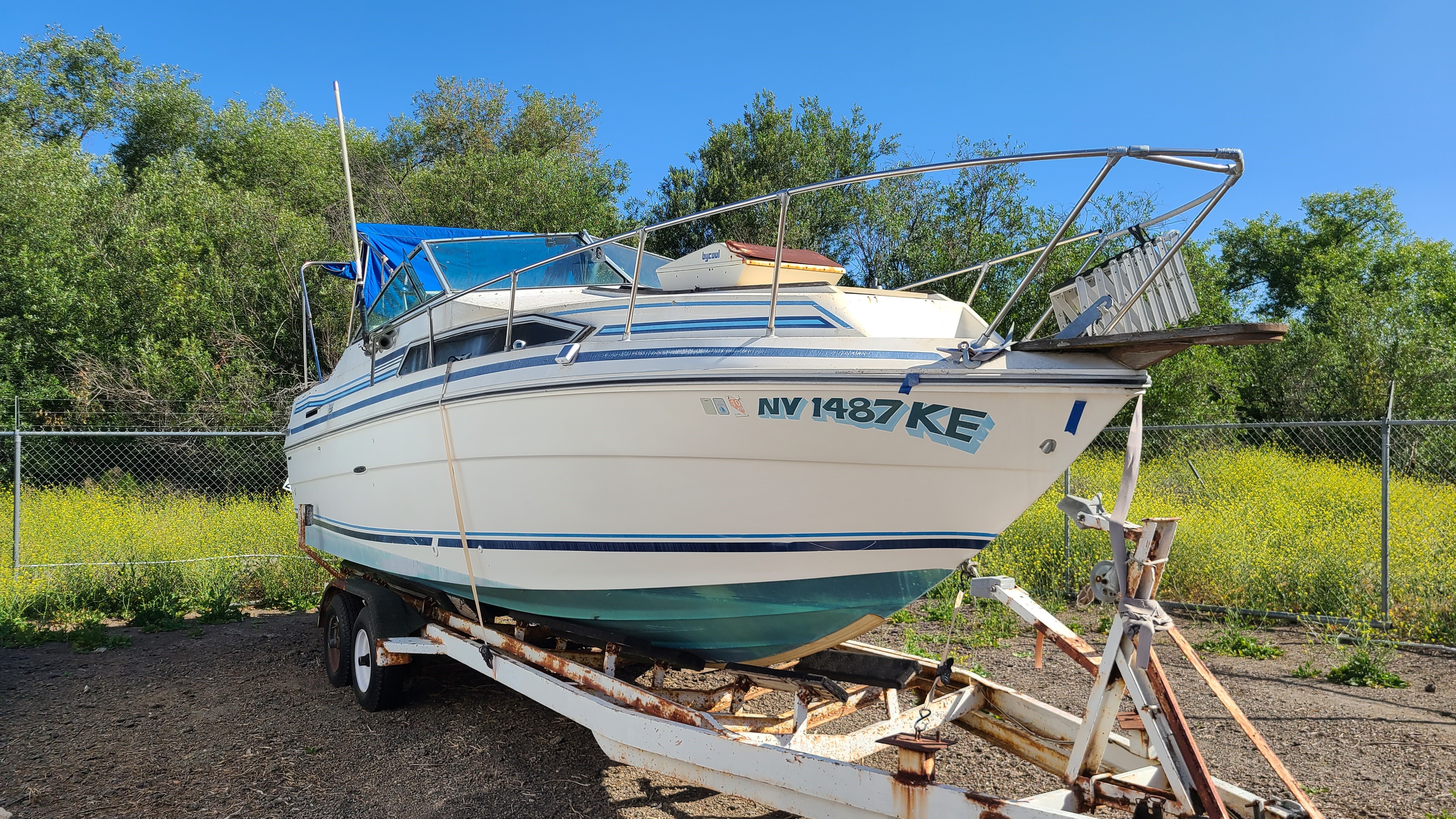 The vessel was examined by the surveyor and/or surveyor’s agents from all accessible areas of the interior without removal of secured panels, destructive testing or disassembly. The hull bottom laminate, plating and/or planking was examined by percussion sounding and visual inspection only. No moisture content readings were taken, and no destructive testing was performed. The surveyor may have used a moisture meter if/when they deemed it useful or if specifically requested by client.
Exterior hardware was visually examined for damage and drive components were tested by sight only. The inspection of engines, generators, machinery and related mechanical systems is not within the scope of this survey. Only a brief cursory inspection of the machinery was conducted, and no opinion of their overall condition was formed. Client shall retain the services of a qualified mechanic, engine surveyor or other expert to inspect such engine, generators, machinery and related mechanical systems. Tankage was inspected from visible surfaces only and no opinion was rendered as to their overall condition. On sailing vessels, the rig was not inspected aloft, nor were sails inspected unless they were visible during a sea trial. Client shall retain the services of a qualified rig surveyor or other expert to inspect sails, rigging and equipment. The electrical system was visually inspected where accessible, and electronic and electrical components powered only with permission of or in the presence of the vessel’s owner or agent. No in-depth testing or examination of the electrical system or electric schematic was conducted. Specifications were taken from published sources, measurements if made, should be considered approximate. The recommendations are based on federal and state regulations, industry standards, and/or surveyor‘s own personal experience.
The market value is based on research of available new/used comparable vessels, with consideration of geographic area where the vessel is located and reported sale prices where available. The surveyor will refer to and may reference CFRs, NFPA and ABYC recommendations (and/or other services) as the surveyor deems reasonable but not all regulations and recommendations will be applied nor should this report be relied upon as full compliance with the aforementioned entities. Every vessel inspection is different, and limitations may alter the scope of this survey, some limitations will be implied in the text of the report and some will be explicitly detailed. A Marine Survey Agreement which is reviewed and signed by the client details the terms governing this marine survey.

The vessel was inspected while trailered. Hull construction material is molded fiberglass. Deck is constructed of molded fiberglass and above deck structures are constructed of molded fiberglass. The windows on the cabin top are “peeling out” of the cabin top. Coring is unknown. Bulkheads are constructed of plywood. Overall condition of the hull structure appears satisfactory. The vessel’s weight is unknown. Exterior rails and hardware appear satisfactory. The boarding ladder’s fasteners are pulling out of the swim platform. Cosmetic condition of vessel appears satisfactory – marginal externally and marginal internally. Vessel’s external colors are white with two blue boot stripes. The vessel is equipped with two submersible automatic bilge pumps in the engine room that appear faulty and the bilge is holding water. The sole hatch aft in the salon has rotted. The ventilation system consists of two blowers and natural ventilation and
appears marginal. General housekeeping appears marginal.

There is unknown capacity in one metal tank located forward of the engines. Fuel tank
surfaces, where visible, appear satisfactory, and the securing mechanism appears good. The fuel fill, vent, feed lines and components appear marginal. The fuel feed hoses are

Vessel has two type B:C size I (1996) by the companionway door portable fire extinguishers. Vessel has no fixed fire suppression system. The vessel includes no CO alarms. The safety components include: no PFDs and no throwable PFDs; no distress flares; no life rafts; no suitable first aid kit; one West Marine and traditional 13 anchor with chain and line rode that appears satisfactory. Navigational and anchor lights
appear satisfactory. Vessel has oil and waste placard.

The vessel was inspected at its storage location. Boarding hazards appear insignificant.

Explanation of value opinion: The average sale price of similar vessels on Soldboats.com is $8,807 and the average current listing price of similar vessels on BoatTrader.com is $10,161. The vessel’s machine systems are faulty. The vessel is in poor condition for its age showing extensive deferred maintenance. The comparable data on Soldboats.com and BoatTrader.com have working engines. The data from Soldboats.com has factored in the demand and value spike attributed to Covid-19.

This survey is for the express purpose of appraisal. It is not meant as a buyer’s survey.

1. Maintain the fire extinguishers per NFPA recommendations. Extinguishers should be inspected and tagged annually and inspected by a qualified technician or replaced every six years.
2. The engines are seized. Service the engines and prove them properly functional.
3. The push-pull cables for the engines and outdrive are seized. Service or replace the cables and prove them properly functional.
4. Replace the wing nuts on the batteries’ terminals with steel nuts use steel nuts and lock washers. Comply with ABYC recommendations.
5. Provide federally required, current and approved distress signal flares.
6. Provide a suitable sound signaling device.
7. There is heat damage at a bus par port forward in the salon. Determine the significance and cause of the heat damage and address appropriately.
8. The wood around the electrical distribution panel has rotted and the panel has fallen forward. Address appropriately.
9. The cabin windows have begun “peeling” away from the superstructure. Address appropriately.
10. The fuel feed hoses are cracked, and the fuel fill and vent hoses are likely original. Replace them.
11. The batteries have no power. Remove the batteries and charge / test and replace them as necessary and prove the DC system properly functional.
12. The boarding ladder’s brackets on the swim platform are pulling out. Properly secure the boarding ladder.
13. We did not test the blowers because the batteries had no power. Service or replace the blowers as necessary and prove them properly functional.
14. The vessel’s registration decal is out of date. Apply the current decals.

1. The water pumps on both engines are rusted. Service or replace the water pumps and prove them properly functional.
2. The bilge access hatch in the salon has rotted and the bilge is holding dirty water. Address appropriately.