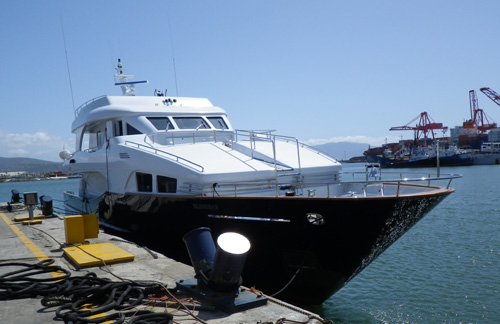 Layout/interior components: The flybridge is a clear open area with a port and starboard ladder leading down to the pilothouse deck. The pilothouse has port and starboard watertight doors. Entry to the sky lounge aft is through sliding glass door from the observation deck. Forward of sky lounge and just aft of the pilothouse is the captain’s quarters with dedicated head. There are two passageways leading from the pilothouse to the sky lounge with door to captain’s quarters and second stairway to main deck. The main deck has a smaller observation deck with port and starboard ladder leading aft to the stern boat launch/swim platform. Entry to the main lounge is through sliding glass door. Forward of main lounge is the dining area. Starboard side forward is a watertight door, inboard and forward is ladder down to two guest cabins forward with twin berths and ensuite heads, aft is V.I.P. cabin with ensuite head. To starboard forward of saloon is door to master stateroom. Master stateroom has berth to port of centerline, walk in locker to starboard forward, head to port forward. Forward port side of dining area is another watertight door to the weather deck with second separate access to the galley. Forward of galley is stairway leading down to the crews’ quarters. Crews’ quarters are two cabins with bunk berths and ensuite heads and laundry room forward. Starboard side aft watertight door and ladder to the engine room. Aft of engine room is boat storage area with a watertight door leading to boat launch/swim platform. Bow of main deck has two port and starboard anchor winches and centerline steps up to pilothouse deck.

Comments: The vessel was inspected while hauled (two days) and afloat (two days). The hull bottom was visually inspected. The hull bottom is in good structural condition. The shipyard representative stated that the hull bottom was tested for thickness with an audio gauge (ultra-sound). They found a thin area of plating to starboard aft. The plate was replaced. This is below the holding tank, to starboard aft in the engine room. The shipyard extended the hull bottom approximately 6’. This extended the swim platform. A ramp designed to assist in retrieving the tender was also fabricated. The extension and the ramp were built per designs by Doug Sharp, Naval Architect. We inspected the hull bottom on March 3rd 2012, it was prepped for painting and all zincs were removed. We inspected the vessel while hauled on March 23rd 2012. The vessel was taken on a sea trial on March 27th 2012. The hull bottom had been painted and the zincs had been installed. The hull sides and transom were visually inspected. The hull sides and transom are in good structural and cosmetic condition. The boat yard stated that they “scratched and painted” the blue paint on the hull sides and the red boot stripe. The deck and superstructure were visually inspected. The deck and superstructure are in good structural and cosmetic condition. A stability document reviewed stated that the superstructure is aluminum, it is unclear exactly where the transition between steel and aluminum occurs or how the joint is made. The deck hardware was visually inspected. Overall the deck hardware is in good – excellent condition. The structural reinforcements including the longitudinals and athwartship frames were visually inspected. The structural reinforcements appear to be in “as-built” condition. During the out of water inspection the bilge was holding minimal water. There was water in the bilge aft of the starboard generator. There was fluid aft in the crew bilge. There is staining on the starboard side of the interior of the aft crew bilge. During the first day of the in water inspection we found a significant amount of water in the engine room bilge, it was determined to be coming from a valve which was left open. The valve reportedly served as a primer for the propeller shafts’ seals. Following the discovery of this water, the bilge pumps were energized, but were not properly primed. Subsequently they were properly primed and functioned normally. There is no high water alarm indicator in the engine room. The water level reached the bottom of the engines’ oil pans and submerged two electric motors in the center engine room bilge. One of these motors assists in cooling the transmission oil. There is oil in the bilge forward of the port generator. There are stains indicative of a weep inboard forward on the starboard main engine and corrosion visible on the bottom interior of the alternator. The interior cabin spaces are neat, clean and orderly. The interior of the vessel is in excellent cosmetic condition. There was work ongoing in the master stateroom; fastener bungs were loose about the window and the desk. There is staining/discoloration of the sideliner forward of the starboard port light in the master stateroom. The starboard guest cabin locker door does not shut easily and a strap for the fire extinguisher is damaged inside the locker. A ramp for the tender was being adjusted on March 26th 2012. The ramp was built to assist in the recovery of the tender by the overhead crane in the garage. This survey is not a mould inspection.

Comments: The engines and transmissions were visually inspected and tested during a sea trial. The survey is not a mechanical survey; please consult with a qualified technician for greater detail as to the condition of the machine systems. The external surfaces and peripheral components of the engines and transmissions appear satisfactory. There is oil in the engine room bilge. The starboard engine’s tachometer is inoperative at the starboard wing station. The digital displays at both wing stations and above the tachometers at the pilothouse helm are inoperative. There are weep stains forward inboard on the starboard engine and corrosion visible on the interior bottom of the alternator. There is a remote, electric pump, used for pumping raw water through the transmission oil coolers. The transmission oil temperature gauges in the engine room did not register any temperature. There are many unsecured items in the engine room. The engine controls functioned normally. There are no controls on the flybridge. The port engine hour meter (in the engine room) is inoperative. The exhaust system is properly arranged and installed. The propulsion components including the propellers, propeller shafts, struts and shaft seals were visually inspected. The propellers were percussion tested and the propeller shafts were observed while underway. Overall the propulsion components are in good condition. The propeller shaft seals are leaking water excessively and they are draining into sump collectors which are also leaking into the bilge. The Spurs line cutters are missing the “cutter” piece on each side. The steering system was visually inspected and test operated. The steering system functioned normally. The engine room blowers were not energized. The generators were visually inspected, test operated and loaded. The generators functioned normally. Fluid and salt crystals are visible in the starboard generator’s drip pan. The through hulls were visually inspected and many of the valves were manipulated. The through hulls are in good condition. The seawater systems were visually inspected and most components were tested. Overall, the seawater systems are in good condition. The electric bilge pumps were energized. The pumps require priming and were not primed (ran dry) for many minutes while attempting to dewater the engine room. The manual bilge pump was not tested. There is rust on and below the air conditioner compressors, to starboard aft in the engine room. The shipyard representative stated that they intend to add ballast to the vessel, to counter the buoyancy created by the hull extension. A brief sea trial was attended by the undersigned. During the sea trial the vessel was difficult to steer straight in a following sea. Many, but not all, of the systems were tested.

Comments: The fuel system including the tanks, fill, vent, feed and return lines was visually inspected as installed. Where visible the fuel system components are in good condition. The condition and age of the fuel (and water) and the integrity of the tanks (fuel, water and holding) and hoses is beyond the scope of this survey. Please consider filling all tanks for a simple, practical test of their integrity. The water pressure system functioned normally. Accuracy of tank level gauges is beyond the scope of this survey. We did not review a tank diagram or trace and inspect all plumbing.

Comments: The electrical system including the shore power cords, shore power inlets, batteries, wiring, circuitry components and circuit protection equipment was visually inspected and many components were tested. Overall the electrical system is in satisfactory – good condition. The condition of the batteries is beyond the scope of this inspection. The number of batteries is minimal for a vessel of this size and there are three different types of batteries in use. The batteries located between the engines use wing nuts on their terminals. Battery cables and wires from a switch located in the port garage bilge run through frames without chafe protection. Work was in progress to exterior overhead lights, sky lounge entertainment system and satellite communication system to starboard below the pilothouse console on March 26th 2012. Many of the courtesy lights in the crew quarters were missing lenses. There is no light bulb in the port guest cabin locker. The Garmin 3010 GPS Map device on the port pilothouse console is not well mounted. An ENI intercom device to port of the center on the pilothouse console is missing its cover piece. The Interphase Twinscope sounder is inoperative. The port generator’s green “on line” indicator light, on the engine room distribution panel is inoperative. The air conditioner controller, to starboard aft in the engine room, displayed a “CS1” error message when energized. The windshield wiper’s washer did not work. Several courtesy lights leading to the passenger and VIP cabins are inoperative.

Comments: Safety equipment for fire fighting protection appears satisfactory however the fixed fire extinguishing system for the engine room has not been inspected, tagged and maintained per N.F.P.A. recommendations. Personal flotation devices appear suitable for offshore use. Current distress signal flares are aboard. A suitable sound signaling device is aboard. The navigational and anchor lights are properly arranged, installed and functional. The ground tackle including the anchors and rodes was visually inspected as installed and appears satisfactory. The entire length of the anchor rodes was not inspected and should be inspected prior to use. The EPIRB’s hydrostatic release expired in 2010. The hydrostatic releases for the life rafts do not have their expiration dates indicated. There is no audible or visual indication (alarm) for the high water alarm in the engine room.