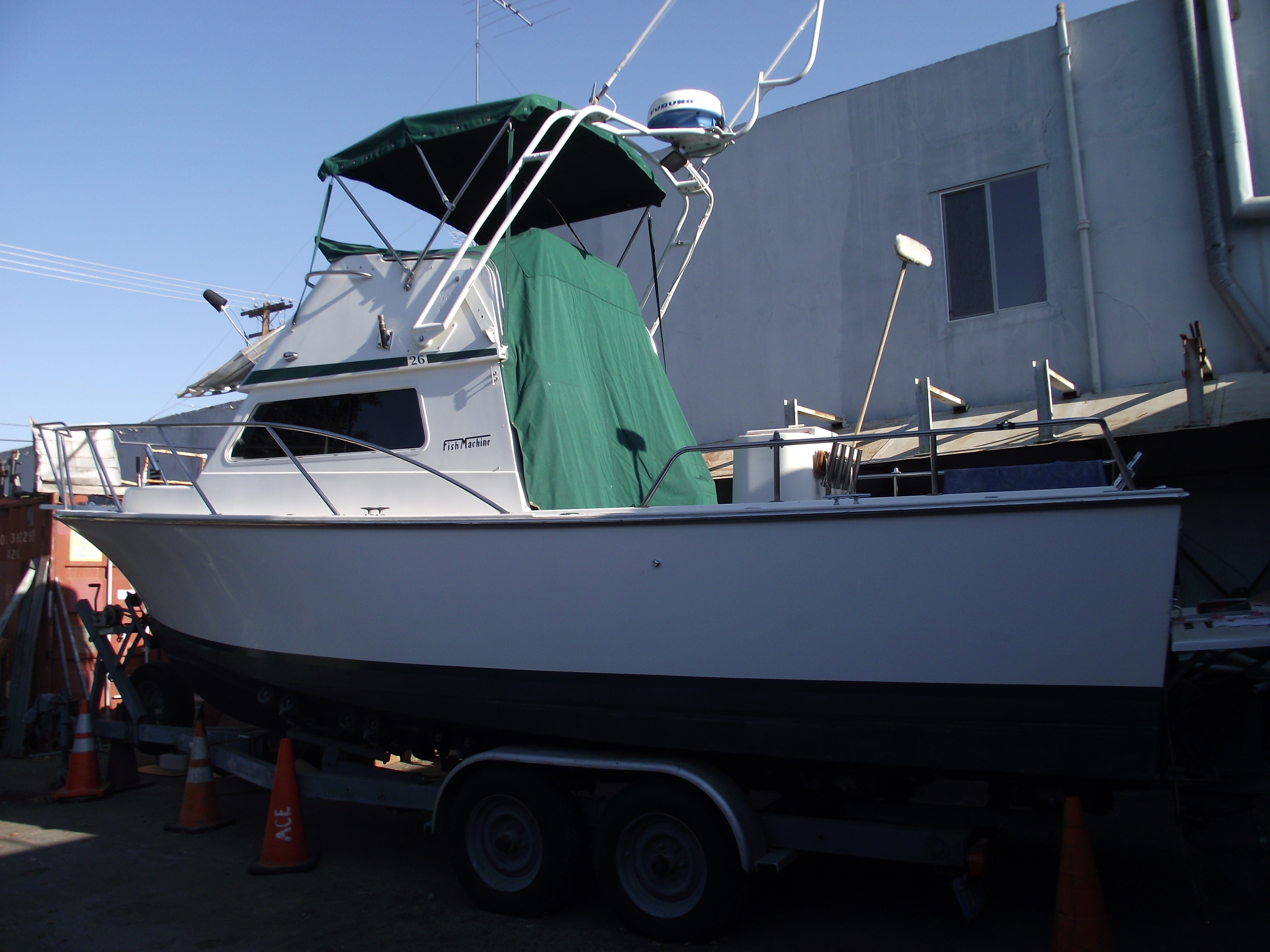 This inspection was performed upon the request of the client listed above on August 14th, 2015 while the vessel was on its trailer at the current owner’s business.  Mr. XXXX and the current owner attended.

Layout/interior components: The vessel is boarded into the cockpit via swim platform. Flybridge access is from a port side cockpit ladder and interior access from aft companionway.  Interior arrangement has the dinette port, head starboard followed by the galley and v-berth foremost.

Comments: The vessel was inspected while on its trailer. The hull bottom was visually inspected and randomly sounded.   The hull bottom is in sound condition with no significant audible differences where sounded and no noticeable osmotic blisters.  The hull sides and transom were visually inspected and randomly sounded. The hull sides and transom are in sound condition overall.  There are gelcoat stress fractures on both port and starboard hull sides adjacent to the cockpit.  These fractures are related to “hard spots” at deck and locker framing to the hull sides and typically limited to gelcoat and not a structural issue.  There are various gelcoat repairs on the port hull side forward and aft and starboard hull side at the transom.  There are various surface gelcoat scrapes on both port and starboard hull sides.  The deck and superstructure were visually inspected and randomly sounded.  The deck and superstructure are in sound structural condition overall except the plywood on the cabin entry step and step sides are soft and appear deteriorated.  The deck hardware including safety rails, mooring devices and hatches was visually inspected and most hatches and the port lights were opened and closed.  Overall the deck hardware is in good condition.    The structural reinforcements including the stringers and bulkheads were visually inspected and randomly sounded.  The structural reinforcements appear to be in sound condition with no fractures or delamination of fiberglass tabbings sighted.  The vessel is equipped with a fish hold that reportedly has insulation below the fiberglass liner.  Areas of the fish hold sole flex indicating there may be deterioration of the insulation.  The overhead plywood in the fish hold (underside of cockpit deck) is not fiberglassed or sealed.   The bilge is holding minimal standing water; the origin of the water is beyond the scope of this survey.  The interior cabin spaces are neat, clean and orderly.  The interior of the vessel is in good cosmetic condition overall.  This survey is not a mould inspection.  The condition of the coring, in the stringers, deck, and elsewhere as applicable, is beyond the scope of this inspection.

Bilge pumps: One electric/automatic, one electric fish hold pump out

Comments: The engine and outdrive were visually inspected. Consider having a mechanic inspect the machinery systems to better determine their condition as this is not a mechanical survey.  The vessel was not sea trialed and the engine was not test run during our inspection.  The external surface and peripheral components of the engine appear good with no significant corrosion but there are isolated areas of surface rust.  Engine cooling systems appear good with no indications of leaks and hoses have no significant deterioration.  Engine fuel systems appear good and electrical systems appear good.  The engine controls appear to function normally.  The exhaust system is properly arranged and installed and appears in good condition with no significant corrosion or significant deterioration of hoses.  The outdrive surfaces appear in good condition overall although there is minor surface corrosion about the aluminum transom ring.  Anti-fouling paint has been painted up to the transom ring and can potentially result in galvanic corrosion from different alloys in the aluminum and anti-fouling paint.  The outdrive peripheral components and bellows appear in good condition and propellers are in good condition.  The outdrive trim control reportedly is intermittent in function due to wire connections although was functional during our inspection.  The outdrive trim pump does exhibit surface corrosion on the motor.  The steering system was visually inspected and appears in good condition.  The steering system was not tested as this requires the engine to be running for the power steering pump.  The through hulls were visually inspected and the valves were manipulated.  The through hulls are in good condition but the waste tank overboard through hull and bait supply through hull valves are seized.  The seawater systems were visually inspected but require the vessel to be afloat for proper testing.  Overall, the seawater systems appear in satisfactory condition but there is surface corrosion of the wash down pump (the pump did energize).  The electric bilge pumps were energized manually and are functional.  The vessel is not equipped with a manual bilge pump.  The vessel is equipped with a potable water pump that was energized and functional.  The vessel is equipped with a manual pump head that appears to be connected with the vessel’s potable water system as it did pump water when tested.

Fuel: 150 reportedly gallon capacity in one aluminum tank below the cockpit

Comments: The fuel tank was not accessed and it would require deck removal. The current owner provided a receipt for fuel tank replacement in 2013.  Fuel fill and vent hoses were not accessed.  The fuel supply and return hoses appear in satisfactory condition and the fuel supply system is equipped with a suitable filter/water separator.  The waste tank appears in satisfactory condition but hoses do appear aged.  The waste tank is equipped with an overboard manual discharge pump that was not tested.  The water tank was not sighted. The condition and age of the fuel, (water and waste) and the integrity of the tanks (fuel, water, holding) and hoses is beyond the scope of this survey.  Please consider filling all tanks for a simple, practical test of their integrity.  The accuracy of tank level gauges is beyond the scope of this survey.

Comments: The electrical system including the shore power cord, shore power inlet, batteries, wiring, circuitry components and circuit protection equipment was visually inspected and most components were tested. The shore power cord, inlet and connections appear satisfactory with no noticeable heat damage.  120 volt wiring and outlets appears marginal – satisfactory as outlets are not equipped with GFCI protection and the shore power outlets have reverse polarity but the inverter polarity is correct (one dedicated plug).  The inverter was not accessed.  Battery arrangement and installation is good.  The condition and age of the batteries is beyond the scope of this inspection.  Batteries are not equipped with a disconnect switch but does have a combiner switch for the house and engine starting batteries for emergency starting.  DC wiring appears satisfactory.  Over current protection for the DC and AC systems appears good but circuits were not traced out.  Wire organization and arrangement is satisfactory.

Comments: Safety equipment for fire fighting protection appears satisfactory however the extinguishers have not been inspected, tagged and maintained per N.F.P.A. recommendations. Personal flotation devices appear for near coastal use.  Distress signal flares have expired certification.  A suitable sound signaling device was seen.  The navigational and anchor lights are properly arranged, installed and functional except the steaming and anchor lights.  The ground tackle including the anchor and rode was visually inspected as installed and appear satisfactory.  The entire length of the anchor rode was not inspected and should be inspected prior to use.  The vessel is equipped with an electric windlass that was briefly energized and appeared functional.

The vessel is a fiberglass production flybridge sportfisher equipped with a single stern drive diesel engine that was built in Southern California. The current owner was present during the inspection and stated that he was unaware of any significant events in the vessel’s history during his or prior ownerships.  Overall, the vessel appears to have been actively maintained, structurally and mechanically sound and suitable for its intended purpose as a near coastal pleasure sportfisher.

The actual cash value is the value that our research approximates the selling price of this vessel should be, at the time and place of our inspection. Consideration is given to vessel’s condition, geographic location, published listings and guides, comparable sales and listings, and market conditions.  The new replacement value is the cost of this or a similar, new vessel, comparably equipped.  The investment is the reported investment including purchase price and significant upgrades.  No values include maintenance costs, storage or tax.

Standard Form Key:   All systems are rated based upon their appearance, ratings include: Not examined, not applicable, Faulty, Marginal, Satisfactory, Good, Excellent.