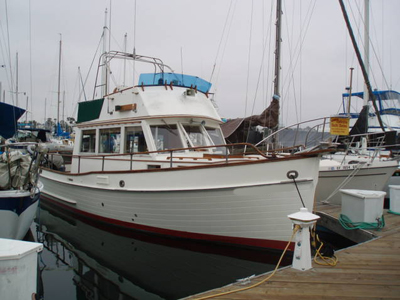 This inspection was performed upon the request of the client listed above on May 16th 2006 while the vessel was hauled. The current owner attended.

Comments: The vessel was inspected while hauled and afloat. The hull bottom was visually inspected and randomly sounded. The hull bottom is in satisfactory structural condition. The anti-fouling paint is at the end of its service life. The hull bottom exhibits blisters, they were not carefully counted but there appear to be at least ten over 4” in diameter and perhaps thirty over 2” in diameter. There are prior blister repairs visible. The hull bottom was not cleaned prior to the survey, the limitations of this survey with respect to small blisters was discussed with the client. The hull sides and transom were visually inspected and randomly sounded as possible while the vessel was hauled. The hull sides and transom are in satisfactory structural and cosmetic condition. There is a cracked plastic discharge through hull on the starboard hull side amidships. The deck and superstructure were visually inspected, randomly sounded and randomly tested with a moisture meter. The teak decking is weathered. Overall, the decks are in satisfactory structural condition. The deck hardware including safety rails, mooring devices and hatches was visually inspected and most hatches were opened and closed. Overall, the deck hardware appears satisfactory. The port aft saloon window is cracked. There is deterioration about the edges of the lazarette hatches. A port forward hand rail is cracked and has been repaired with glue in several places. There is water damage visible about the windows and some deterioration of the window frames. The structural reinforcements including the stringers and bulkheads were visually inspected, randomly sounded and randomly tested with a moisture meter. Overall, the structural reinforcements are in “as-built” condition. There is minor detached tabbing visible overhead in the anchor rode locker. The interior cabin spaces are clean, neat and orderly. There are two rips in the saloon headliner. There is water damage internally about the saloon windows, worse to starboard. The bilge is holding minimal water and oil in the engine room. Water has accumulated outboard of the port stringer in the engine room. Stains about the overhead penetration for the fuel fill and galley sink drain indicate water has leaked about the fittings. Gasoline is stored in the lazarette in portable plastic cans. Portable propane cans are stored in two galley lockers. The registration sticker is from 2005. The swim platform flexes when the edges are stepped on, there is separation between the outboard brackets and the transom.

Bilge pumps: One manual pump, one electric/automatic in forward cabin

Comments: The engine and transmission were visually inspected and the vessel was taken on a brief sea trial. The external surfaces and peripheral components of the engine and transmission appear satisfactory. There is corrosion on the exterior of the engine and transmission. There is a fluid leak at a bolt aft on the exhaust manifold; steam/smoke is visible in this location, particularly at high rpms. There is a fluid leak at the starboard aft corner of the head; there is a puddle of fluid on the motor mount. This appears to be a water leak. The engine was started prior to this survey; no cold start was witnessed. Wide-open throttle was approximately 2200-rpms and top speed was 8-knots. The client reports that he found a log indicating that there are more hours on the engine than are on the hour meter. The survey is not a mechanical survey; please consult with a qualified mechanic for greater detail as to the condition of the engine and transmission. The client noted steam in the engine’s exhaust. There is a soft hose to starboard aft on the engine; it has apparently been exposed to fuel. There is likely a fuel leak in this location. There is fluid/oil below the engine. The engine controls appear to function normally; the surveyor did not take control of the vessel during the sea trial. The exhaust system was visually inspected and appears properly arranged and installed. The exhaust hose is cracked and deteriorating near the transom. The propulsion components including the propeller, propeller shaft, stern tube assembly and shaft seal were visually inspected. The propeller was pressure tested and spun with a fixed object adjacent to the blades. The propeller exhibited minor “run-out”. The propeller shaft bearing is loose in the stern tube assembly. The steering system functioned normally. The through hulls and related components were visually inspected and I manipulate the valves. The small valve in the head and the engine’s cooling water intake valve are seized. The electric seawater pump was not tested. The manual bilge pump was not tested. The electric bilge pump was energized with its float switch. The float switch is secured with one screw, and is loose.

Comments: The fuel system including the tanks, fill, vent, feed and return lines was visually inspected as installed. Where visible the fuel system appears satisfactory. The fuel hoses are not labeled per U.S.C.G. regulations or A.B.Y.C. recommendations. The age of the fuel hoses is unknown. The condition and age of the fuel (and water) and the integrity of the tanks (fuel, water and holding) is beyond the scope of this survey. Please consider filling all tanks for a simple, practical test of their integrity. The water pressure system functioned normally. There is water hose visible overhead, forward in the lazarette which is currently not in use. The current owner reports that the macerator electric waste discharge pump is inoperative. There is a fiberglass tank forward on the centerline in the lazarette, apparently filled with water and used for ballast.

Comments: Safety equipment for fire fighting protection appears satisfactory however; none of the extinguishers have not been inspected and tagged in the past year per N.F.P.A. recommendations. Flotation devices appear satisfactory for near coastal use. The horn is inoperative. Distress signal flares are aboard however their expiration dates have passed. The navigational and anchor lights are properly arranged and installed. The starboard navigational light is dim and the anchor light is inoperative. The tender is currently covering the stern light. The ground tackle including the anchors and rode was visually inspected as installed and appears satisfactory. The entire length of the anchor rode was not inspected and should be so inspected prior to use. The anchor is not secure and the anchor shackle is not seized. The emergency tiller handle was not test fit.

Comments: The LP gas system was visually inspected and the valve overhead in the galley and the galley range were test operated. Overall, the installation of the LP system appears satisfactory. The propane system is not equipped with a pressure gauge, electric solenoid valve or propane alarm. The vessel is not equipped with a carbon monoxide alarm. The oven valve was stiff and the oven was not tested.

1. Provide and display a current registration sticker.
2. Replace the cracked port aft saloon window.
3. Replace the broken plastic discharge through hull on the starboard hull side.
4. Remove the portable gasoline cans from the lazarette.
5. Remove the portable propane cylinders from the galley.
6. Replace the soft hose to starboard aft on the engine. Determine if a fuel leak exists, service to eliminate the fuel leak if/as necessary.
7. Free-up and prove the engine’s cooling water intake valve and small through hull valve in the head properly functional.
8. Determine the significance of the fluid leak at the bolt aft on the engine’s exhaust manifold, service to eliminate the leak and clean the black accumulation to allow detection of any future leaks.
9. Service to eliminate the apparent fluid leak at the starboard aft corner of the engine’s head. Determine the significance of the steam in the engine’s exhaust and address appropriately.
10. Properly install the bearing for the propeller shaft in the stern tube.
11. Clean the oil and fluid from below the engine, service to eliminate any leaks.
12. Repaint the hull bottom with anti-fouling paint.
13. Either replace the exhaust hose as it is cracked near the transom or monitor and replace as necessary.
14. Properly secure the bilge pump’s float switch so it cannot move.
15. Assure that the dead end wires to starboard of the engine are de-energized and remove the wires.
16. Provide and install a suitable locking ring on the shore power cord and tighten or replace the shore power inlet to eliminate the “loose condition”.
17. Replace wire nuts used in the electrical connections with butt connectors or terminal boards.
18. Service and prove the horn properly functional or provide other means for sound signaling.
19. Modify to eliminate the covering of the stern light with the tender.
20. Service and prove the starboard navigational light properly functional and in compliance with the visibility requirements.
21. Service and prove the anchor light properly functional.
22. Provide a means of securing the anchor to the bow and seize the anchor shackle.
23. As the fuel hoses are not labeled U.S.C.G. type A1, per regulations and A.B.Y.C. recommendations, assure they are suitable for continued use or replace as necessary.
24. I encourage upgrading the LP gas system including the installation of a pressure gauge, propane alarm and carbon monoxide alarm. Consideration should be given to installing an electric solenoid valve.

1. Determine the source of the water outboard of the port stringer in the engine room, service to eliminate any leaks. Water may be leaking through the deck about the fuel fill fitting, address appropriately.
2. Service to eliminate deterioration about the edges of the lazarette hatches.
3. Properly secure and strengthen the swim platform supports, eliminate the flexing at the outboard brackets.
4. Repair the blisters on the hull bottom or monitor and repair as necessary.
5. Address the weathered teak decks if/as desired.
6. Service to eliminate any leaks to the saloon window and repair damage about the windows including to the window frames if/as necessary.
7. Either repair the minor tabbing disbonding overhead in the anchor rode locker or monitor and repair as necessary.
8. Clean the corrosion from the exterior of the engine, service to eliminate any leaks and paint to arrest corrosion and to allow detection of any future leaks.
9. The engine’s performance parameters with respect to wide-open throttle were not obtained. No “no-load” test was performed of the engine.
10. Service the inoperative sounder and knotmeter as desired.
11. Service and prove the engine room blower properly functional.
12. Service and prove the autopilot properly functional.
13. Replace the macerator; a new macerator is aboard, pending installation.
14. The following components were not tested or inspected: tender, outboard engine, water outlets in cockpit, electric seawater pump, I did not retrieve anchor with the windlass (it apparently will not feed into the anchor rode locker), sliding windows, television.