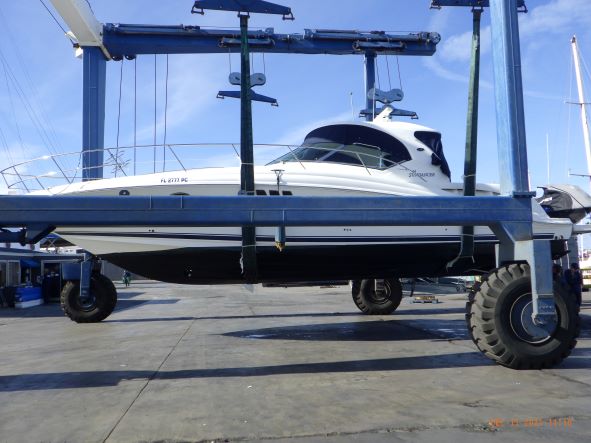 Explanation of value opinion:  The value is based on the Soldboats.com reported sales prices, Yachtworld.com and BoatTrader.com listing prices below.  The surveyed vessel’s navigational electronics are “dated”.  The surveyed vessel exhibits deferred maintenance.  The Soldboats.com reported sales and the current listings all have nearly similar engine horsepower ratings and are all equipped with diesel engines.  We have included similar vessels listed for sale in other states; the vessels listed on the East Coast and Texas are listed at a notably higher price than in California.  There is no information as to why the vessel listed for $325,000 in Oxnard, CA is listed notably higher; its machine systems appear to be of the same age and rating as the other vessels that are listed in California (based on its listing).  The NADA Vessel Guide Average Retail Price for 2006 44 Sundancer is $255,300.  The valuation we have placed on the vessel takes into consideration the condition of the vessel, its systems and its location.  The vessel is being sold with the inclusion of a PWC; the value of the PWC is beyond the scope of this survey and is not included in our appraisal.  The data from Soldboats.com, Yachtworld.com and BoatTrader.com have factored in the demand and value spike attributed to Covid-19.

The statements of fact contained in this report are true and correct. The reported analyses, opinions, and conclusions are limited only by the reported assumptions and limiting conditions, and are my/our personal, unbiased professional analyses, opinions, and conclusions. I/we have no present or prospective interest in the vessel that is the subject of this report, and I/we have no personal interest or bias with respect to the parties involved.  My/our compensation is not contingent upon the reporting of a predetermined value or direction in value that favors the cause of the client, the amount of the value estimate, the attainment of a stipulated result, or the occurrence of a subsequent event.  I/we have made a personal inspection of the vessel that is the subject of this report.  This report should be considered as an entire document.  No single section is meant to be used except as part of the whole.  This report is submitted without prejudice and for the benefit of whom it may concern.  This report does not constitute a warranty, either expressed, or implied, nor does it warrant the future condition of the vessel. It is a statement of the condition of the vessel at the time of survey only.  The submitting of this report creates no liability on the part of Christian & Company or the individual surveyor.