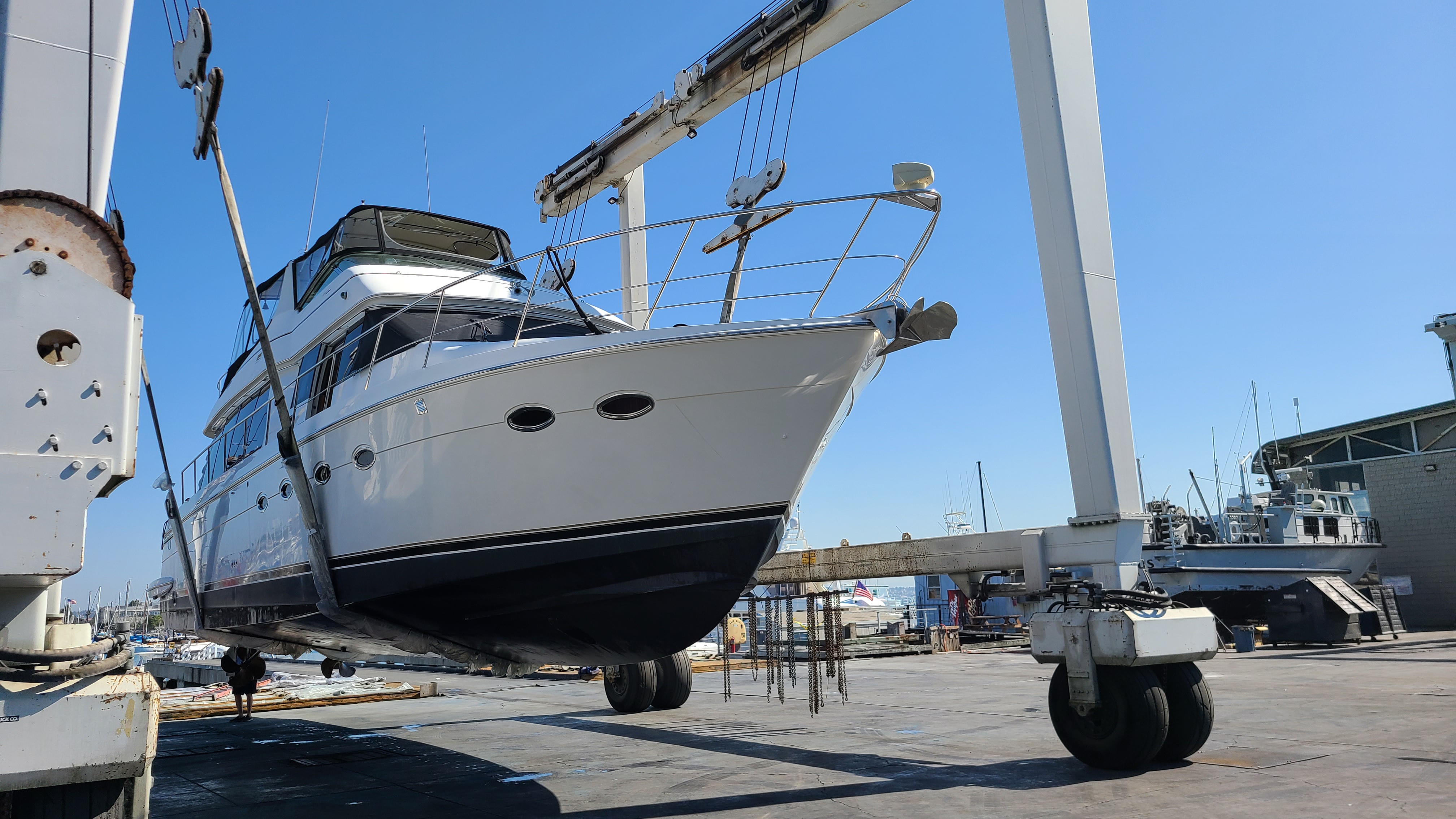 This inspection was performed upon the request of the client listed above on September 30, 2021 while the vessel was hauled at Driscoll Boat Works, Shelter Island and afloat at Sunroad Resort Marina, San Diego, CA and the names of those in attendance have been removed for privacy.

The vessel is a composite fiberglass flybridge, cockpit, pilothouse motor vessel equipped with two diesel engines and a diesel generator.  The vessel was built in Pulaski, Wisconsin.  The listing broker reported that the current owner purchased the vessel approximately nine years ago in San Diego, CA.  He reported that the engines and transmissions are original.  He reported that the bottom paint is close to two years old.  He disclosed that the generator reportedly had a fire approximately 7 years ago and was rebuilt by Cal Pacific (reported but not confirmed), it was the subject of an insurance claim.  He disclosed no knowledge of any other problems with the vessel.  The vessel was inspected in its slip, while hauled and underway on a sea trial in San Diego Bay.  The vessel is basically structurally sound.  The vessel exhibits deferred and recent maintenance.  Upon completion of the recommendations, the vessel should be suitable for its purpose as a coastal cruising vessel.

Explanation of value opinion:  The average sale price of similar vessels on Soldboats.com is $342,281 and the average current listing price of similar vessels on Yachtworld.com is $418,796.  The most relevant sale prices are West Coast vessels.  The majority of the Soldboats.com comparable vessels are equipped with higher horsepower engines than the surveyed vessel (typically, higher horsepower engines hold more value).  The surveyed vessel exhibits deferred and recent maintenance.  The condition of the vessel is the most significant negative factor in the valuation.  The condition of the vessel, its systems and its location have been factored into our valuation.  The data from Soldboats.com and Yachtworld.com have factored in the demand and value spike attributed to Covid-19.

Off The Hook Yacht Sales

The statements of fact contained in this report are true and correct. The reported analyses, opinions, and conclusions are limited only by the reported assumptions and limiting conditions, and are my/our personal, unbiased professional analyses, opinions, and conclusions. I/we have no present or prospective interest in the vessel that is the subject of this report, and I/we have no personal interest or bias with respect to the parties involved.  My/our compensation is not contingent upon the reporting of a predetermined value or direction in value that favors the cause of the client, the amount of the value estimate, the attainment of a stipulated result, or the occurrence of a subsequent event.  I/we have made a personal inspection of the vessel that is the subject of this report.  This report should be considered as an entire document.  No single section is meant to be used except as part of the whole.  This report is submitted without prejudice and for the benefit of whom it may concern.  This report does not constitute a warranty, either expressed, or implied, nor does it warrant the future condition of the vessel. It is a statement of the condition of the vessel at the time of survey only.   The submitting of this report creates no liability on the part of Christian & Company or the individual surveyor.