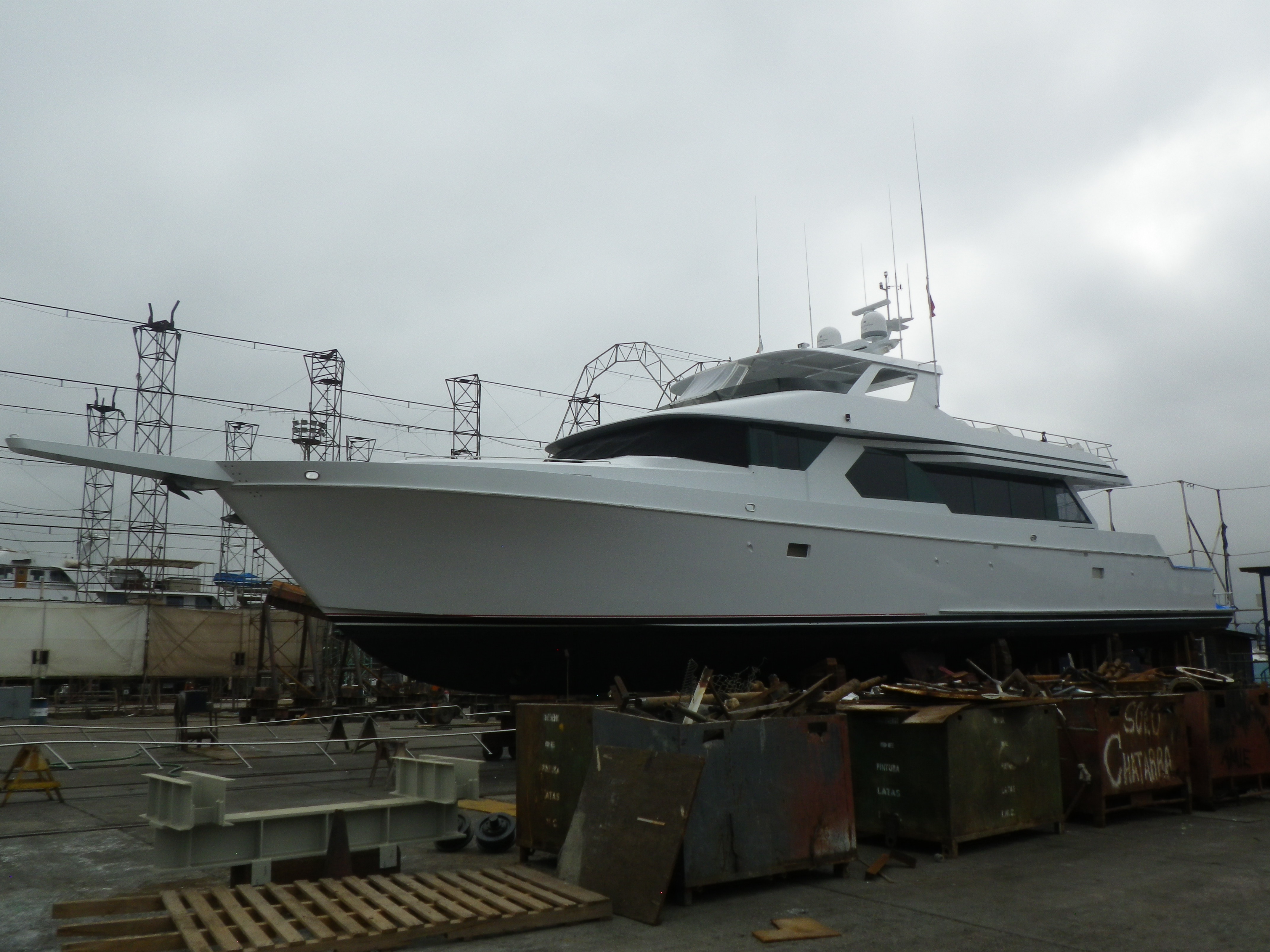 The vessel was inspected while hauled. Hull construction material is molded composite fiberglass. Deck is constructed of molded fiberglass and above deck structures are constructed of molded fiberglass. Coring is unknown. Bulkheads’ construction is unknown. Overall condition of the hull structure appears good. The vessel’s weight is unknown. Exterior rails and hardware appear satisfactory. Cosmetic condition of vessel appears satisfactory – good externally and internally. Vessel’s external colors are white with a full green boot stripe and red and green boot stripes forward. Below waterline through hull fittings appear satisfactory. The vessel is equipped with nine electric / automatic bilge pumps that appear good and the bilge is holding minimal water and is clean. The ventilation system consists of two engine room blowers and natural ventilation that appears good. General housekeeping appears good (boat is in the yard).

There is 5,200 gallon capacity in four metal tanks located two aft and two forward of engine room. Fuel tank surfaces, where visible, appear good and the securing mechanism appears good. The fuel fill, vent, feed and return lines and components appear good. Fuel shut off valves are located at the manifolds in the engine room and appear good.

The vessel is a composite fiberglass, flybridge, pilothouse, cockpit motor yacht. The vessel was manufactured in Tacoma, WA. The vessel is equipped with two diesel engines and two diesel generators. The client was reportedly a partner in the vessel when it was new and has since bought out the other partners. The vessel was inspected while hauled. The captain reports that the hull was last painted in 2006 at Knight & Carver Yacht Center. The above deck components were painted at the dock over the next two years. The projects which had begun before our arrival include the removal of the propulsion components, rudders, several through hulls, fin stabilizers and bow rail. The engines were not test operated and no sea trial was performed. The vessel has a crew of three. The vessel is basically structurally sound. The vessel is suitable for its intended purpose as a coastal cruising vessel.

C & V Form Key: All systems are rated based upon their appearance, ratings include: Not examined, not applicable, Faulty, Marginal, Satisfactory, Good, Excellent.

1. Two paddlewheels are missing from paddlewheel transducers on the hull bottom, one aft and one forward. Replace if / as necessary.
2. There is minor cosmetic damage externally including damage to the red boot stripe to port, a visible patch in the green boot stripe on the port side near the transom and several small dings on the starboard hull side. Address as desired.
3. Several port lower rub rail fasteners are missing to port and one to fastener to protruding to starboard. Address appropriately.
4. The door to the diesel fuel dispenser in the transom door’s threshold is seized. We did not access and inspect these components and they are reportedly no longer in use. Consider eliminating any liabilities including the corroded (red) pump in the starboard lazarette.
5. The stern capstans have been abandoned. The captain stated they are not used in the normal operation of the vessel.
6. We did not unplug the 100 amp shore power cord from the inlet, disconnect, inspect the shore inlet and cord connector and address any liabilities.
7. We did not pull up covers which were fastened down to protect the vessel including covers over the lockers forward in the cockpit, access, inspect and address any liabilities.
8. We did not test and prove the high water alarm, we recommend this test.
9. Address salt crystals on two valves for refrigeration compressors’ raw water systems, to starboard in the tank room.
10. There is soot to starboard forward in the tank room outboard and overhead, the captain reports this is likely from a smoke inducing electrical problem which happened many years ago. Clean the soot as possible to allow detection of any future smoke or soot inducing incidents.
11. The paint is blistering on the aluminum hardtop supports for the flybridge, address as desired.
12. There is various sideliner and headliner damage. They are loose and wrinkled in many areas of the interior of the vessel. Address as desired.
13. The pilothouse previously had mechanical controls connected to the control levers which are also electronic. The captain reports that there were problems with the control system and disconnecting the mechanical controls appears to have eliminated those problems. Their design was to provide redundancy, we strongly encourage returning that redundancy while eliminating the reported previous problems.

This survey sets forth the condition of the vessel and components, as specifically stated only, at the time of inspection and represents the surveyor’s honest and unbiased opinion. The submitting of this report should not be construed as a warranty or guaranty of the condition of the vessel, nor does it create any liability on the part of Christian & Company or the individual surveyor. No part of the vessel was disassembled or removed and no assumptions should be made as to the condition of concealed components. Specifics were obtained from sources available at the time of inspection and are believed correct, but are not guaranteed to be accurate. This inspection was performed for the expressed purpose of obtaining insurance/finance and should provide the information necessary for underwriting purposes. If any additional information is required, please contact the undersigned. This survey report is not intended for use as a “buyer’s survey.”