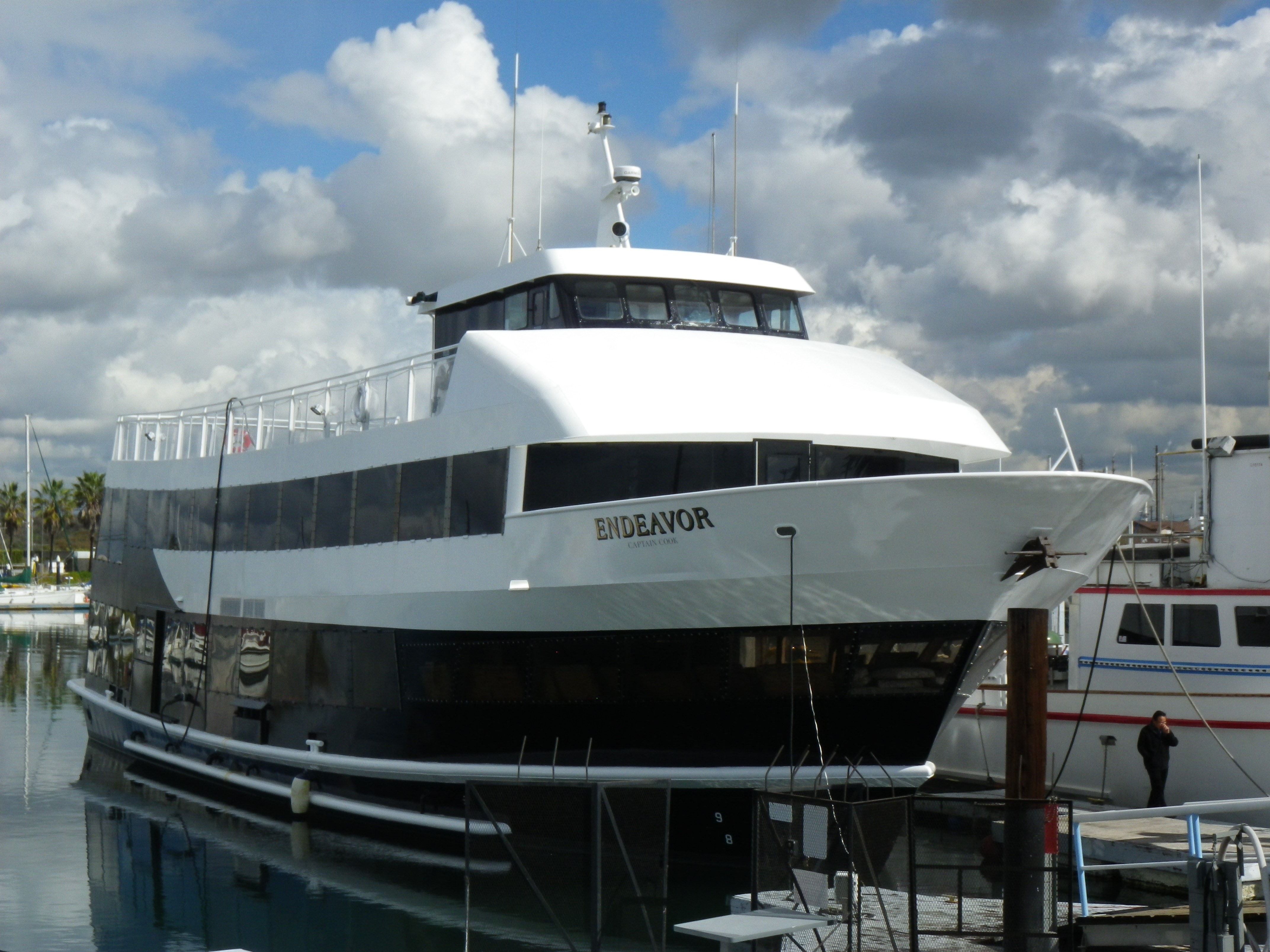 There is 2,200 gallon (reported) capacity in an unknown number of tanks located in the
bilge spaces. Fuel tank surfaces, where visible, appear satisfactory and the securing
mechanism appears good – excellent. The fuel fill, vent, feed and return lines and
components appear satisfactory.

Vessel has seven portable fire extinguishers with current (Feb 2013) certification.
Vessel has two fixed fire suppression systems. There is a raw water system with
stations (hoses and valves) on the upper deck at pilothouse, one aft on the second deck,
one to port on the main deck, and one aft on the main deck. This system includes an
AC fire pump with manifold aft in engine room. There is also an engine room Kidde CO2
system. The safety components include: four hundred adult type I, forty child type I
PFDs and five throwable PFDs (one with MOB strobe and two with retrieving line);
distress flares with current (April 2016) certification; suitable first aid kit; one anchor with
chain and line rode that appears satisfactory. Navigational and anchor lights appear
good. Other safety equipment includes: fire axe, air horn, ship’s bell, 406 MHz EPIRB
with hydrostatic release, two MOB strobes in boxes, life sling.

The vessel is a steel passenger carrying vessel equipped with two diesel engines and
two diesel generators. The vessel was built in 1977. The client purchased the vessel in
October 2012, apparently from a lender. The client reports that the engines were
installed in 1999, apparently by the builder of the vessel. Since purchasing the vessel,
the client has upgraded the vessel. The vessel was hauled at Knight & Carver Yacht
Center (San Diego); the undersigned surveyed the hull bottom at that time. An
ultrasonic inspection was reportedly performed for hull plate thickness, several inserts
were added to replace plating which was found thin. Two new propeller shafts’ packing
glands were installed. Other upgrades include electronics, EPIRB, broken ceiling tiles
and replacement of lights. The entire exterior and interior of the vessel has been
repainted. Several pieces of cracked plexiglass have been replaced. The client stated
he spent approximately $280,000.00 upgrading the vessel since purchase. The client
believes that the certificate of inspection will be reinstated in the near future; a Coast
Guard inspection is scheduled for March 12, 2013. The engines were not tested and no
sea trial was performed at the time of the survey. The client reports that the vessel was
briefly test operated in the recent past and all mechanical systems functioned properly.
The vessel is basically structurally sound and suitable for its intended purpose as a
passenger carrying vessel. The certificate of inspection has not been reinstated and the
vessel is disorganized, but no significant deficiencies were noted.
The vessel has been certified to carry 350 passengers in protected waters, however the
certification of inspection is not current.

1. Service and maintain the Ansul autopulse IQ-301 fire alarm system per the
manufacturer’s recommendations.
2. Display the hailing port on the transom.
3. Attach retrieving lines and MOB strobe lights to all life rings.
4. The engine room fire extinguishing system does not have a current tag. We
spoke with the technician who is servicing the system and he stated that the
system is in suitable condition for use and should be tagged in the near future.
The written report indicates that the generators were not tested. Assure that the
system is properly functional and provide and display an inspection tag.
5. Replace wing nuts used at battery terminals with steel nuts and lock washers.
Comply with A.B.Y.C. recommendations.
6. Return the portable extinguisher to the engine room, it was removed for painting.
7. Clean corrosion from the engine room ventilation flap assemblies, prove these
devices properly functional. Service if/as necessary.
8. Service and prove the starboard forward engine room light properly functional.
9. Eliminate the water leak from the starboard rudder port. Clean water and
corrosion from this area, prep and paint as needed to prevent future corrosion.
10. The vessel is equipped with one anchor, there is no windlass. The intended use
of the vessel is as a passenger carrying vessel in protected waters with no
anchoring. It anchoring is to be part of the normal usage of the vessel, a
windlass and a secondary anchor and rode should be brought aboard and
proved.

1. There is a loose blower and several tank access covers loose in the third from
forward bilge space. We did not inspect the tank diagram or determine which
tanks are designed to be used as ballast tanks (if any). Assure that any tanks
designed to be used as ballast are used as ballast, return tank or bilge space
access covers as necessary to comply with the design parameters.
2. Properly secure the loose CO2 bottles in the starboard locker forward of the main
deck bar.
3. Move the plastic storage rack which hinders access to the emergency escape
hatch to port of the galley.
4. The sole forward and aft of the galley is unfair, this is likely the top of tankage.
The significance of this condition if beyond the scope of this survey.
5. Many items are not currently stored for the movement of the vessel which will
occur while underway. Loose items include many items in the galley. Properly
store components before getting underway.
6. The generators’ controls indicate low battery voltage, address as necessary.
7. The Racor filter bowls for the port main engine are cloudy, replace as a matter of
maintenance.
8. The following components were not tested or inspected: engines and related
components, generators and related components, steering system, high water
alarm, fire fighting system including doors, door releases, automatic and manual
hatch closures and alarm system, seawater fire fighting system, bilge pumping
system, public address system, autopilot, waste system.