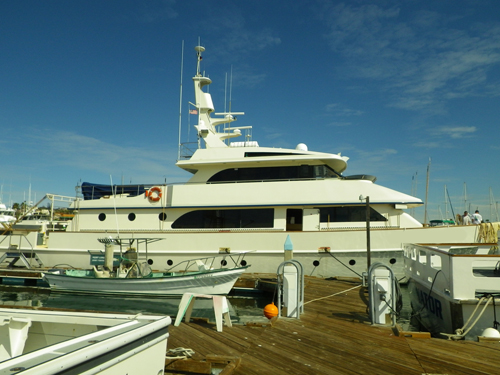 The vessel was inspected while afloat. Hull construction material is steel. Deck is constructed of steel and above deck structures are constructed of steel. Bulkheads are constructed of steel. Overall condition of the hull structure appears good – excellent. The vessel’s weight is unknown. Exterior rails and hardware appear good. Cosmetic condition of vessel appears satisfactory externally and satisfactory internally. Vessel’s external colors are white with blue and gray stripes on superstructure. Below waterline through hull fittings appear good. The vessel is equipped with two electric bilge pumps and a manifold pick up system that appear good and the bilge is holding minimal water. The ventilation system consists of engine room blowers and natural ventilation and appears good. General housekeeping appears good. The condition of the coring, in the stringers, deck, and elsewhere as applicable, is beyond the scope of this inspection.

The actual cash value is the value that our research approximates the selling price of this vessel should be, at the time and place of our inspection. The actual cash value is best determined by a thorough market search to determine what vessels are available on the market, followed by negotiations between the interested parties. Consideration is given to vessel’s condition, geographic location, published listings and guides, comparable sales and listings, and market conditions. The new replacement value is the cost of this or a similar, new vessel, comparably equipped. The investment is the reported investment including purchase price and significant upgrades. No values include maintenance costs, storage or tax. Note – This is a unique vessel with very little information available regarding comparable sales or listings. Our research revealed a wide range of values and the value above is based on a compilation of the data.

These recommendations are the surveyor’s ideas and suggestions for addressing deficiencies with damaged or suspect components or systems found during survey or general improvements . The primary recommendations address safety items, structural issues, operational issues or deficiencies which the surveyor determines are of greater importance or more expense than secondary deficiencies. For instance, items that pose a risk to passenger safety or immediate property damage are listed under primary deficiencies and cosmetic concerns are addressed in the comments and usually they are discussed at the time of the inspection.

1. There is a loose ballast to port in the engine room, properly secure the ballast to prevent movement in heavy weather conditions.
2. An electrical panel to starboard forward in the engine room does not fit well over panel, modify as necessary.
3. We could not determine the inspection date for the fixed extinguishing system serving the engine room (located in a locker to port near the ntry to the main saloon). Assure that it has current certification or address appropriately.
4. The vessel was briefly operated during a survey. We did not test the function of all components for the vessel however most components are properly functional and the vessel is active. The owner stated that most components are original, including the engines , transmissions, generators, and most of the electronics.

This survey sets forth the condition of the vessel and components, as specifically stated only, at the time of inspection and represents the surveyor’s honest and unbiased opinion. The submitting of this report should not be construed as a warranty or guaranty of the condition of the vessel, nor does it create any liability on the part of Christian & Company or the individual surveyor. No part of the vessel was disassembled or removed and no assumptions should be made as to the condition of concealed components. Specifics were obtained from sources available at the time of inspection and are believed correct, but are not guaranteed to be accurate. This inspection was performed for the expressed purpose of obtaining insurance, and should provide the information necessary for underwriting purposes, if any additional information is required, please contact the undersigned. This survey report is not intended for use as a “buyer’s survey.”