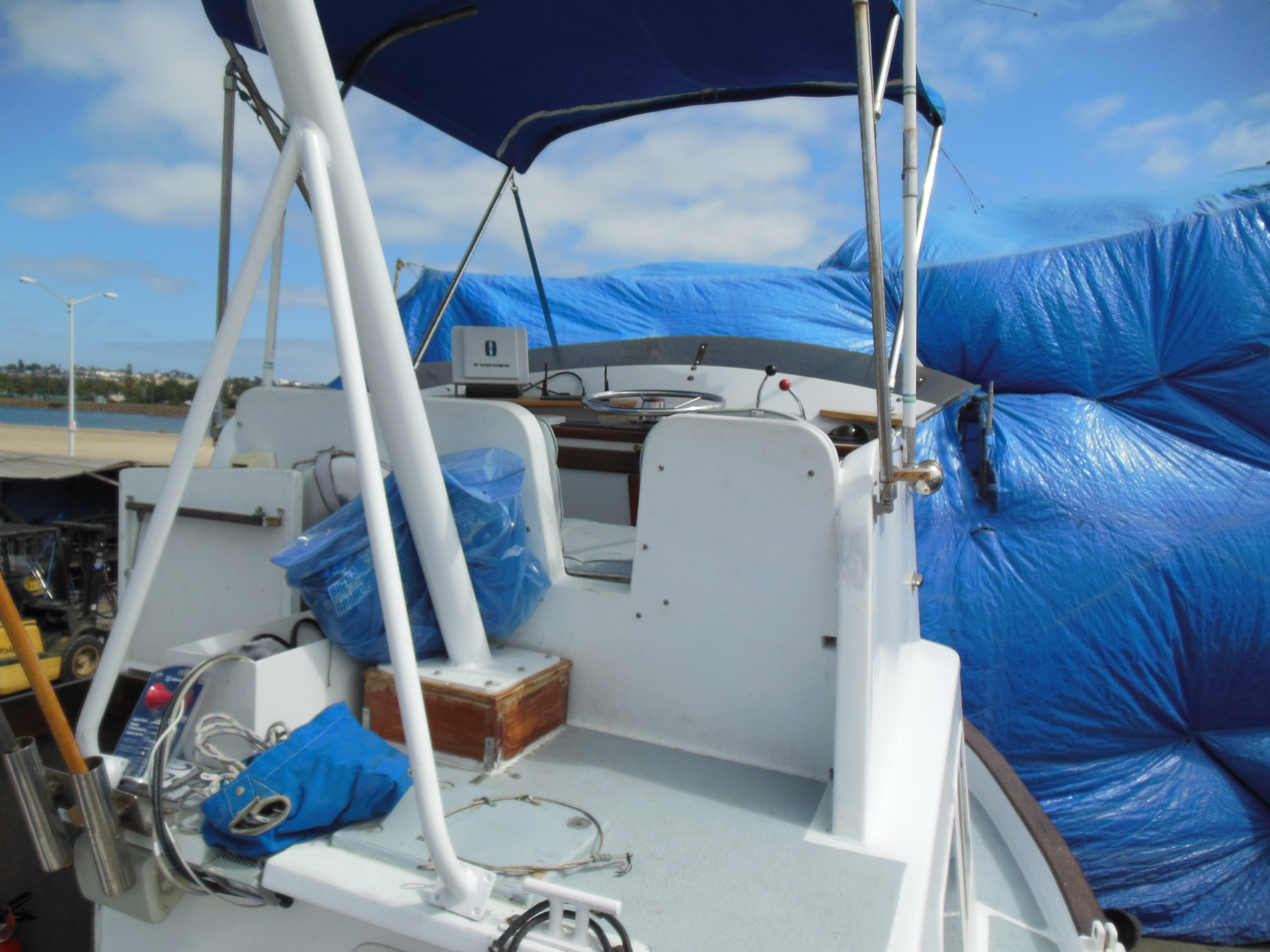 Vessel has one 2015 and one 2009 portable fire extinguishers. Vessel has no fixed fire suppression system.  The safety components include: four adult type I, two child type I (aboard), six adult type I and three child type I PFDs (ordered); distress flares with current certification; one 33 lb. Claw anchor with chain and line rode that appears good.  Navigational and anchor lights appear satisfactory.  Other safety equipment includes: an electric horn and a 406 MHz EPIRB.

The vessel is a wooden commercial fishing vessel with a flybridge, large cockpit, small cabin and diesel engine. The construction history is unclear.  The clients purchased the vessel in January 2015 in Oceanside, California.  The vessel has been hauled for two weeks, fasteners have been added about the transom ring, new knees have been added at the chine to port aft and to starboard forward in the cockpit bilge.  The client had assistance from an experienced shipwright.  The hull bottom and sides have been painted.  The propeller and rudder were cleaned.  Some safety components have been purchased.  The vessel was inspected while hauled, the engine was not started and no sea trial was performed.  The vessel appears basically structurally sound.  The vessel appears suitable for its intended purpose as a near coastal cruising and fishing vessel.

The actual cash value is the value that our research approximates the selling price of this vessel should be, at the time and place of our inspection.  The actual cash value is best determined by a thorough market search to determine what vessels are available on the market, followed by negotiations between the interested parties.  Consideration is given to vessel’s condition, geographic location, published listings and guides, comparable sales and listings, and market conditions.  The new replacement value is the cost of this or a similar, new vessel, comparably equipped.  The investment is the reported investment including purchase price and significant upgrades.  No values include maintenance costs, storage or tax.

C & V Form Key:        All systems are rated based upon their appearance, ratings include: Not examined, not applicable, Faulty, Marginal, Satisfactory, Good, Excellent.
This survey is for the express purpose of insurance and financing. It is not meant as a buyer’s survey.

This inspection was performed for the expressed purpose of obtaining insurance/finance and should provide the information necessary for underwriting purposes. If any additional information is required, please contact the undersigned. This survey report is not intended for use as a “buyer’s survey.”