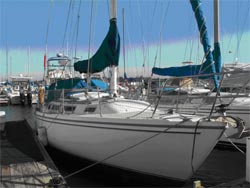 Vessel is equipped with LP gas, which fuels the galley range and cabin heater. Tank
external appearance is satisfactory and it is properly secured. Ventilation appears
satisfactory. Tank valves were opened and an odor was not noticed. Feed line is
equipped with a reducing regulator, a pressure gauge and an electric shut off solenoid
and feed lines appear satisfactory.

The vessel is a production fiberglass sailboat equipped with a diesel engine. The vessel
was manufactured in Woodland Hills, CA. The client purchased the vessel in 2010 in
Marina del Rey, CA. The client states that the engine and transmission are original. He
has no idea of the age of the standing rigging or sails. He has replaced the propeller
shaft, refrigeration and auto pilot. The vessel was inspected while hauled and briefly
while afloat. The engine was not test operated and no sea trial was performed. The
vessel is basically structurally sound. The vessel is well maintained. The vessel is
suitable for its intended purpose as a near coastal cruising vessel.

1. Replace the fire extinguishers with new fire extinguishers. Maintain the fire
extinguishers per NFPA recommendations. Inspect and tag or replace fire
extinguishers in 6 year intervals.
2. Provide federally required, approved and current distress signal flares.
3. Replace the battery in the EPIRB and maintain the EPIRB per the manufacturer’s
recommendations.
4. Service and prove the bilge pump functional in the automatic mode.
5. The vessel is equipped with a propane heater, the client states that he never
uses the heater. If the heater is to be used, exercise extreme caution. We
strongly encourage the installation of a propane alarm and a carbon monoxide
alarm.
6. There are wires connected directly to the battery which are smaller than normal.
Determine their purpose, increase size as necessary to eliminate any liabilities.
Comply with A.B.Y.C. (or similar) standards.

1. Several of the windows are cracked, one is in the process of being replaced.
Replace cracked windows as necessary.
2. There is moderate corrosion on the engine and heat exchanger, service as
necessary to eliminate any weeps or leaks. Remove corrosion, prepare and
paint to allow detection of any future weeps or leaks.