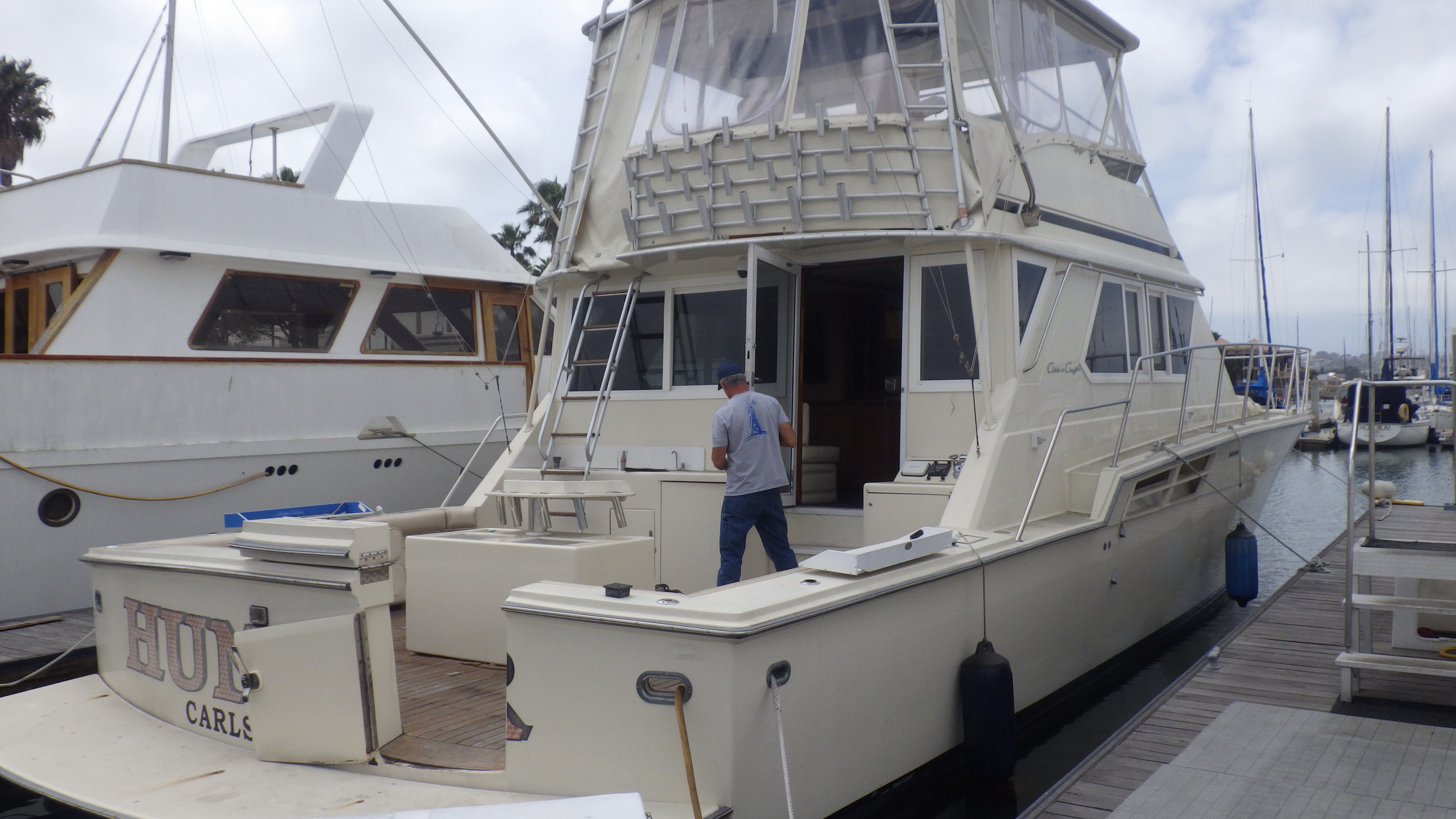 Vessel has five 2.5 lb. dry chemical portable fire extinguishers manufactured in 2015, and one manufactured in 1997. Vessel has no fixed fire suppression system. The safety components include: numerous PFDs and one throwable PFDs; distress flares were not seen; 80 lb. CQR anchor with chain and line rode that appears minimal. Navigational and anchor lights appear satisfactory (not tested).

1. Provide federally required, approved and current distress signal flares.
2. Clean the fuel filter bowls and fuel as necessary. There is growth in the fuel filter bowls, more significantly to starboard.
3. Assure that the vessel has at least three functional electric / automatic bilge pumps that are suitably sized for the vessel.
4. We encourage installation of a high water alarm.
5. Provide and install covers for the electrical distribution sub panel in the engine room, the sides are not covered.
6. Provide and install a faceplate for the electrical switch aft in the engine room, which currently has no faceplate.
7. Free up and prove all of the engines’ through hull valves functional, they were stiff and were not moved.
8. Provide and install covers for all of the batteries’ terminals to prevent accidental short circuiting.
9. Determine why there are disconnected battery cables near the starboard aft engine room battery, assure there is no liability associated with the unused cables.
10. There is a wet bronze “spot” to port of the centerline aft in the engine room bilge near the main engine through hulls and strainers. This may be a fastener through the bottom of the vessel which is corroded away, determine the cause and address appropriately.
11. Remove oil and water from below the starboard engine. Eliminate any weeps or leaks.
12. Eliminate water below and outboard of the port engine. Eliminate any weeps or leaks.
13. Free up the stiff or seized through hull valve forward of the port engine, likely for the port generator.
14. Cap or plug all unused through hulls including one to port aft in the engine room and one in the lazarette bilge.
15. Replace the broken mirror located forward in the saloon, this presents a personal injury risk.
16. Assure that the vessel has suitable main AC over current protection. Comply with ABYC recommendations.
17. The HIN is illegible on the transom , modify to comply with federal regulations.

1. There is a hose connected to a through hull just above the waterline to starboard aft in the engine room, the hose is unused and is currently plugged with a wooden dowel plug. Modify to prevent any leaks through this hose.
2. The electrical system uses welding cable for battery cable. Welding cable is prohibited by ABYC recommendations. There was no damage noted to the welding cable. Monitor the cable and replace if / as necessary.
3. Address the corrosion on both engines’ starboard forward motor mounts. Eliminate the cause of the corrosion.
4. The starboard generator’s hour meter was running continuously, even though the generator was not running. Address as desired.
5. Eliminate the air bubble in the flybridge compass.
6. Address miscellaneous cosmetic deficiencies including scratches on the port hull side aft. The vessel was extremely dirty, clean the vessel as necessary.
7. Paint is failing on the foredeck, address as desired.
8. There is water damage below the window support in the saloon and galley, eliminate any water leaks and repair the damage as desired or as necessary.
9. The plastic shower enclosure in the master head is cracked, replace as desired.
10. Miscellaneous aluminum components exhibit corrosion including hardware on the tower and backing plates for stanchions and deck hardware. Address as necessary.
11. Remove wire nuts used at electrical connections for the waste components in the forward bilge. Replace wire nuts with butt connections or terminal boards. Comply with ABYC recommendation.
12. There is minor corrosion and salt crystals about the rudder ports, address appropriately.

This survey sets forth the condition of the vessel and components, as specifically stated only, at the time of inspection and represents the surveyor’s honest and unbiased opinion. The submitting of this report should not be construed as a warranty or guaranty of the condition of the vessel, nor does it create any liability on the part of Christian & Company or the individual surveyor. No part of the vessel was disassembled or removed and no assumptions should be made as to the condition of concealed components. Specifics were obtained from sources available at the time of inspection and are believed correct, but are not guaranteed to be accurate. This inspection was performed for the expressed purpose of obtaining insurance, and should provide the information necessary for underwriting purposes, if any additional information is required, please contact the undersigned. This survey report is not intended for use as a “buyer’s survey”.