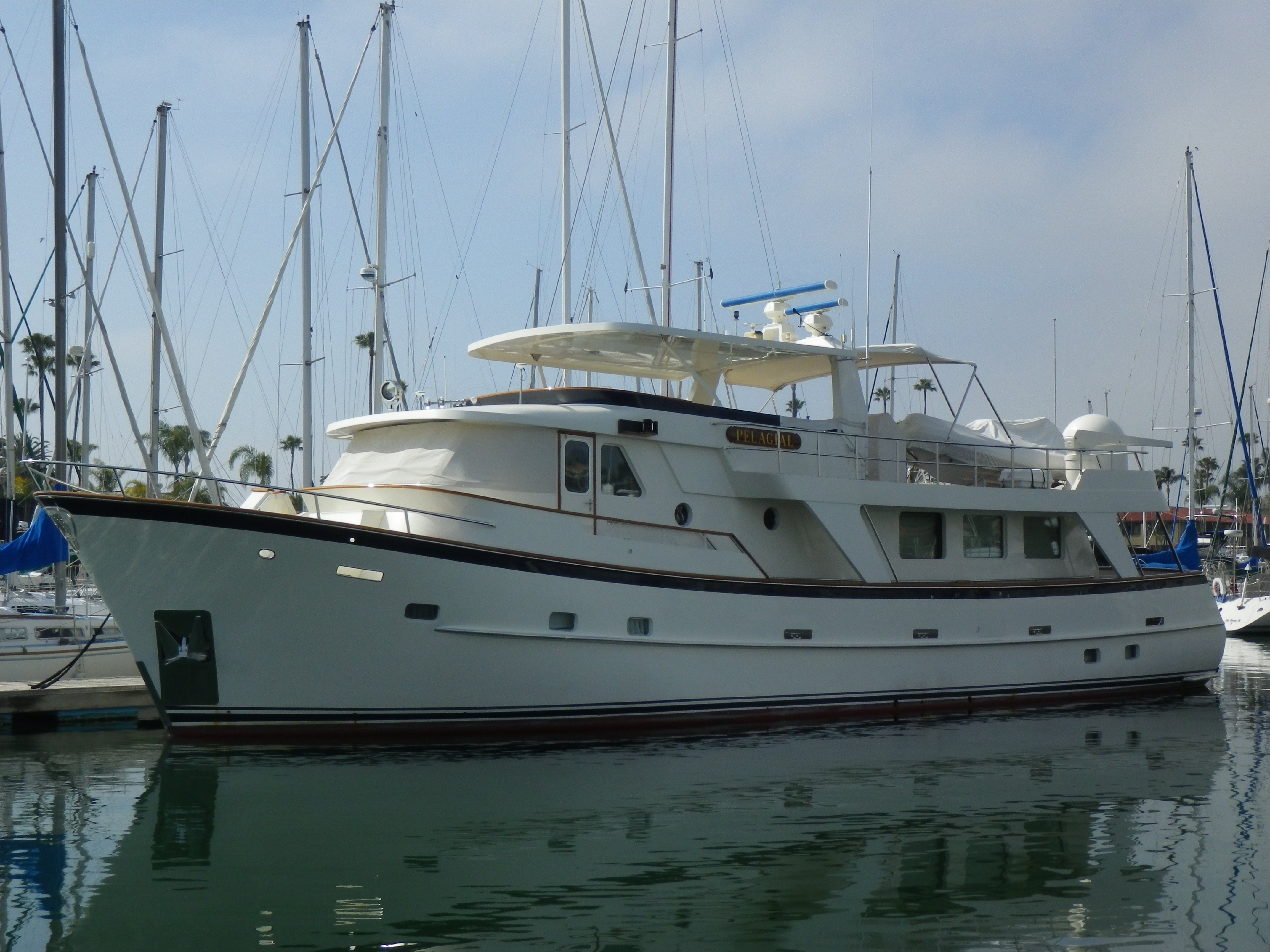 The vessel was inspected while afloat. Hull construction material is steel. Deck is constructed of teak over steel (main deck) and above deck structures are constructed of aluminum. Bulkheads are constructed of steel. Overall condition of the hull structure appears good. The vessel’s tonnage is 76 *. Exterior rails and hardware appear good. Cosmetic condition of vessel appears good externally and internally. Vessel’s external colors are white with blue stripes. The vessel is equipped with three apparent electric/automatic bilge pumps (two were seen), that appear satisfactory and the bilge is holding minimal water. The ventilation system consists of two engine room blowers and natural ventilation and appears good. General housekeeping appears excellent.

There is a 3,492 gallon fuel capacity *. Tanks’ locations were not determined. Where
visible, fuel system components appear good.

Vessel is equipped with LP gas that fuels the galley range and flybridge grill. Tanks’
external appearances are satisfactory and they are properly secured. Ventilation
appears satisfactory. Tank valves were opened and an odor was not noticed. Feed line
is equipped with a reducing regulator and two electric shut off solenoids and feed lines
appear good. The system includes two Sieger Limited model CF1 gas alarm panels
(forward in engine room).

The vessel is a steel motor yacht equipped with two diesel engines and two diesel
generators. The vessel was built in Monnickendam, Holland to a design by Herman
Janssen. The vessel was reportedly extended at the factory in 1996. The extension
was 8’ and was made in the middle of the vessel, adding space in the galley and engine
room areas. The superstructure is reportedly aluminum. The client purchased the
vessel in 2006 in Florida. The hull bottom was audio gauged at that time and no
problems were reported. The vessel was inspected at the slip, the engines and
generators were not test operated, no sea trial was performed and the vessel was not
hauled for survey. The vessel appears basically structurally sound and suitable for its
intended purpose as a long range cruising vessel.

None at this time.

1. There is moderate rust about the engine room, there are pockets of water
accumulated including to starboard in the aft cabin and by the passageway
bilge pump, address appropriately.
2. There is a moderate amount of oil in the engine room bilge, address
appropriately.
3. Service to eliminate the apparent leak near the starboard fin stabilizer. Clean
spilt oil to allow detection of any future leaks.
4. There is significant ballast in the form of ingots in the aft cabin bilge, assure the
ingots are properly secured to prevent them from moving in a seaway.
5. There are paint lines visible about the lights on either side of the transom.
6. There is a smell of varnish in the lazarette, ventilate this area to eliminate any
fire hazard.
7. There is rust below the interior of the transom hatch in the bilge, service to
eliminate the leak and clean corrosion to allow detection of any future leaks.
There are salt crystals on the batteries in this location; address appropriately.
8. There are a few spots of paint blisters externally, address if/as necessary.
9. There is water damage to the wood below the pilothouse to flybridge hatch.
10. New distress signal flares should be obtained.
11. The life rafts should be maintained per the manufacturer’s recommendations.

This inspection was performed for insurance and refinancing purposes and should provide the information necessary for underwriting. If any additional information is required, please contact the undersigned. This survey report is not intended for use as a “buyer’s survey”.