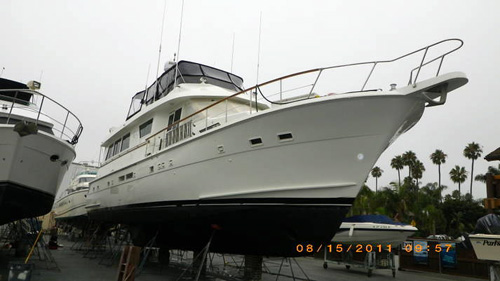 The vessel was inspected while hauled. Hull construction material is molded fiberglass. Deck is constructed of molded fiberglass and above deck structures are constructed of molded fiberglass. Coring is unknown. Bulkheads are constructed of plywood. Overall condition of the hull structure appears good. The vessel’s weight is unknown. Exterior rails and hardware appear good. Cosmetic condition of vessel appears satisfactory externally and satisfactory internally. Vessel’s external colors are white with black boot stripe. Below waterline through hull fittings appear satisfactory. The vessel is equipped with five electric/automatic bilge pumps that appear satisfactory – good and the bilge is holding minimal water. The ventilation system consists of engine room blowers and appears good. General housekeeping appears good, but boat is currently “in the yard”. The condition of the coring, in the stringers, deck, and elsewhere as applicable, is beyond the scope of this inspection.

The vessel is a fiberglass motor yacht equipped with two diesel engines and two diesel generators. The client purchased the vessel in 2006 in Miami. Upgrades to the vessel have included a new battery charger, clothes washer and dryer, added storage with custom lockers, new carpet throughout the vessel, towel warmers, televisions, television cabling, new Tecma heads, forward head converted to an office, flybridge enclosure and significant engine and generator repairs. The vessel is currently hauled and undergoing various projects including the elimination of nine through hulls, servicing fin stabilizers and repainting the boot stripe. The client lives aboard the vessel. The vessel was inspected while hauled. The vessel appears basically structurally and mechanically sound.

1. Provide federally required, approved and current distress signal flares.
2. Maintain the life rafts per the manufacturer’s recommendations, relocate life rafts from beneath the flybridge enclosure.
3. Maintain the EPIRB per the manufacturer’s recommendations, replace the battery.
4. Display the hull identification number per federal regulations.
5. Display the documentation number per federal regulations.
6. Replace the cracked air conditioner raw water hoses visible to port forward in the engine room. Inspect other similar hoses and replace as needed.
7. Replace the damaged hose at the port engine’s raw water pump. Eliminate the leak, clean stains and corrosion below the leak to allow detection of any future leaks.
8. Properly cap or plug the unused through hull aft of the starboard transmission.
9. A green battery cable is disconnected near the starboard engine’s starter. The client stated that this condition has existed since purchase. Address as necessary.
10. There are salt crystals by the starboard engine’s starter, service to eliminate the source of the salt crystals and clean to remove them to allow detection of any future leaks.
11. The plywood base below the aft generator is bowed downward, repair this component.
12. There is salt visible on the top of the forward generator’s sound box, service to eliminate the source and clean to remove the salt to allow detection of any future weeps or leaks.
13. The compass on the flybridge is badly cracked, replace the lens.
14. Through hull repairs are in progress, an unused through hull was found in the bilge near the clothes washer/dryer. Assure that all through hulls are either used or properly capped or plugged. Carefully inspect the through hull work upon launching the vessel.

1. There is a moderate blister condition on the hull bottom, the hull bottom was drying at the time of survey thus limiting the visibility of blisters. There are likely one hundred blisters larger than 1” in diameter, with sizes up to 1.5” in diameter, there are more smaller blisters, repair blisters or monitor and repair as necessary.
2. There is anti-fouling paint damage around the through hulls (halo damage), properly prepare and repaint these areas.
3. The trim tabs are bent, repair if/as desired.
4. Several swim platform supports are bent, repair if/as desired.
5. There are a few patches and scratches on the hull sides and transom, address cosmetically as desired.
6. Repair cracks at the transom door, near the hinges.
7. The client is currently pulling various cables through the vessel including high definition television cables and cable onto the flybridge.