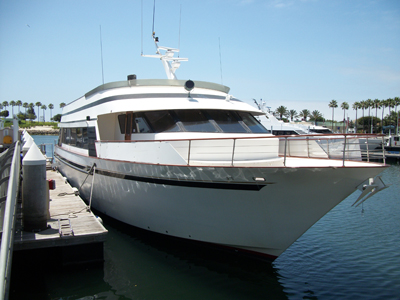 The vessel was inspected while afloat. Hull construction material is molded fiberglass. Deck and above deck structures are fiberglass over plywood. Bulkheads are constructed of plywood. Hull coring is unknown. Overall condition of the hull structure appears satisfactory with no fractures or delamination of fiberglass tabbings sighted. The vessel’s weight is unknown. Exterior rails and hardware appear satisfactory but non skid strips on the upper deck access steps are worn and some sections missing. Cosmetic condition of vessel appears weathered externally and there are various areas of scrapes and chips on hull side finishes and satisfactory internally. Vessel’s external colors are white with a red boot stripe, black and gold sheer stripes and black upper accent stripes. Below waterline through hull fittings appear satisfactory with no significant corrosion. The vessel is equipped with two portable and one manual bilge pumps, one electric/automatic bilge pump and two 220 volt electric manifold fire/bilge pump systems that appear satisfactory but the lazarette automatic pump is not functional. The bilge is holding water in the lazarette and forward in the engine compartment. The ventilation system consists of two blowers and natural ventilation appears good. General housekeeping appears good. The condition of the coring, in the stringers, deck, and elsewhere as applicable, is beyond the scope of this inspection.

There is 2096 gallon capacity (per bulkhead diagram) in five aluminum tanks located outboard of engines and one center sole tank. Fuel tank surfaces, where visible, appear satisfactory but there is some standing water in the forward engine compartment bilge that is to the bottom of the center tank. This likely is resulting in corrosion of that tank but is not visible and the securing mechanism appears good. The fuel fill, vent, feed and return lines and components appear good but there is a minor leak on the port engine’s fuel return hose at the compression fitting. Fuel shutoff valves are located at the tanks with emergency pulls at the engine room entry and appear good.

The AC shore cord, inlet and connections were not separated for inspection. The AC wiring and outlets appear satisfactory. The AC main feeds are protected with circuit breakers. Battery arrangement appears satisfactory. Batteries are equipped with disconnect switches. DC wiring appears satisfactory. Circuit protection for the AC and DC branch system appears good. Wire terminations and connections appear satisfactory – good but there are disconnected wires at an unused air compressor that may be connected to power sources and wire connections for the lazarette bilge pump are corroded. Wire organization and arrangement appears good but circuit breaker wire connections on the helm distribution panel are not protected from stowage below the helm.

The vessel is a semi custom fiberglass production passenger dinner cruise vessel equipped with twin inboard diesel engines. The vessel is Coast Guard certified for 139 passengers and used in the Long Beach Harbor waters for dinner/wedding cruises. The vessel history was not obtained. Vessel systems were not tested during the inspection but machinery systems do appear to be actively maintained. The vessel’s hull structure appears in sound condition and the vessel suitable for its intended purpose as a passenger charter vessel.

1. Replace the port engine’s raw water discharge hose due to chafe damage where it rest against the forward engine mount and provide chafe protection for the new hose.
2. Service to eliminate the minor fuel leak on the port engine’s fuel return hose at the compression fitting.
3. Monitor both engines transmission cooler hoses for deterioration replacing as required as they are near the end of their serviceable life.
4. Replace the corroded hose clamps on the engines propeller shaft seals and generator’s raw water supply hose.
5. Service and replace the starboard generator’s sea strainer gaskets due to significant salt build-up about the gaskets.
6. Replace the starboard generator’s exhaust hose due to deterioration.
7. Monitor both generators coolant service hoses for deterioration due to age replacing as required.
8. Remove corrosion from the port generator’s exhaust mixing elbow, inspect for deterioration and replace if/as required.
9. Assure the disconnected wires for the unused air compressor pump are disconnected from power supplies until servicing of the pump.
10. Install light bulbs of lower wattage or smaller size as required to eliminate burning of the lenses on the aft boarding deck overhead lights.
11. Install a cover for the wire connections on the DC distribution panel below the helm to eliminate potential from accidental short circuiting from stowage.
12. Provide locking covers for the flybridge docking engine controls when not being used.
13. Service the port rudder port to eliminate minor weeping from seal.
14. Clean surface corrosion from the rudder pillar block bearings and rudder shelf and paint to arrest further corrosion.
15. Prove the high water alarms functional.
16. Remove the standing water from the engine compartment bilge and lazarette and inspect the center fuel tank for corrosion in areas that have been wetted from the bilge water servicing if/as required.
17. Clean corrosion from the lazarette bilge pump wire connections and prove the automatic switch functional.
18. Replace non skid strips on the upper deck access stairs as they are worn and sections are missing.

This survey sets forth the condition of the vessel and components, as specifically stated only, at the time of inspection and represents the surveyor’s honest and unbiased opinion. The submitting of this report should not be construed as a warranty or guaranty of the condition of the vessel, nor does it create any liability on the part of Christian & Company or the individual surveyor. No part of the vessel was disassembled or removed and no assumptions should be made as to the condition of concealed components. Specifics were obtained from sources available at the time of inspection and are believed correct, but are not guaranteed to be accurate. This inspection was performed for the client to obtain a general condition and market value of the vessel. If any additional information is required, please contact the undersigned. This survey is not intended for use as a “pre-purchase” survey.