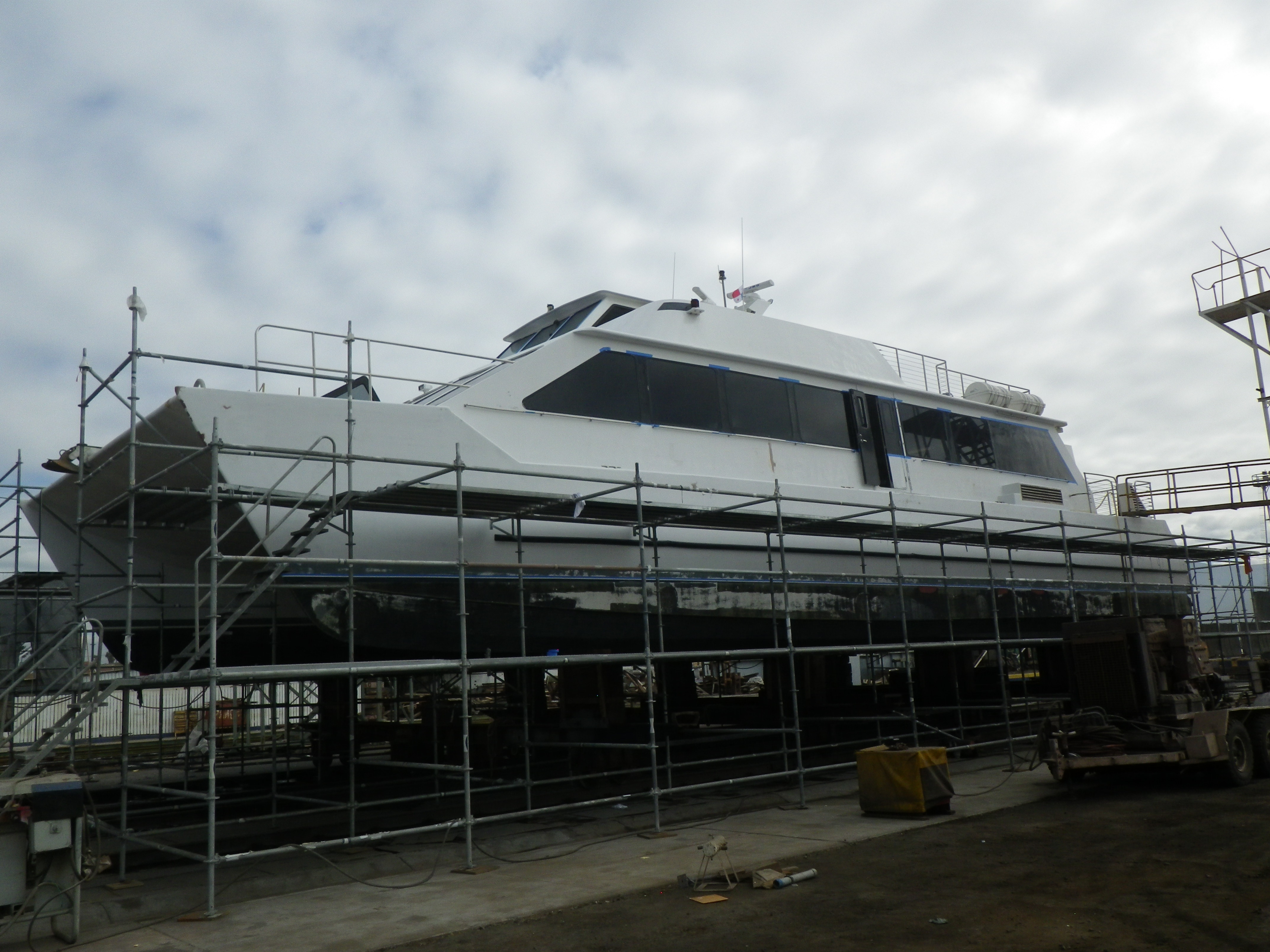 The vessel was not inspected at its normal slip location.
Summary: N/A

The vessel was a proto-type. It is a passenger carrying catamaran equipped with two diesel engines and two diesel generators.  It was previously a U.S. Coast Guard inspected vessel, but the certificate of inspection has expired.  There have been problems with the dependability of the engines, particularly when operating at the top of intended load range.  Initially the vessel had foils mounted between the hulls though the current owner has removed the foils.  The vessel was inspected hauled.  No components were tested, the engines were not operated and there was no sea trial performed.  The hull bottom and hull sides were percussion tested as accessible.  Overall the vessel appears to be structurally sound.  It was reported that the current owner purchased the vessel in April 2013.  The owner’s representative stated that the vessel attained 13 knots during the delivery to Ensenada on January 18, 2014.  Upgrades since purchase include electrical system upgrades, AC source switching and new batteries.  The fuel system was cleaned, safety system components have been upgraded, all deck hardware has reportedly been re-bedded, the windlass has been repaired and all the windows have been removed and reinstalled.  The owner’s representative, Andrew, stated that the vessel has a temporary Panamanian flag and is scheduled to be delivered to Panama City, Panama.  The vessel is currently hauled and various repairs are underway, including repairs to some delamination about the starboard jet drive.  Upon completion of the recommendations the vessel should be suitable for use as a passenger carrying vessel.
Overall Summary: Satisfactory

This survey sets forth the condition of the vessel and components, as specifically stated only, at the time of inspection and represents the surveyor’s honest and unbiased opinion. The submitting of this report should not be construed as a warranty or guaranty of the condition of the vessel, nor does it create any liability on the part of Christian & Company or the individual surveyor.  No part of the vessel was disassembled or removed and no assumptions should be made as to the condition of concealed components.  Specifics were obtained from sources available at the time of inspection and are believed correct, but are not guaranteed to be accurate.  This inspection was performed for the expressed purpose of obtaining insurance/finance and should provide the information necessary for underwriting purposes. If any additional information is required, please contact the undersigned.  This survey report is not intended for use as a “buyer’s survey”.