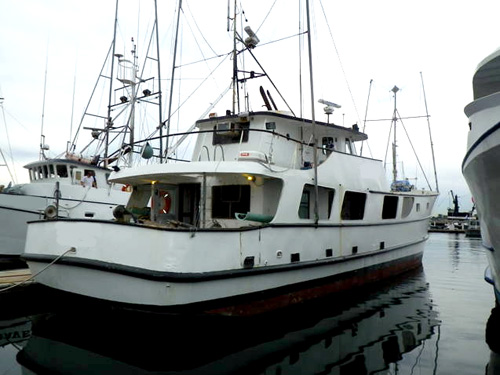 There is a 2100, 4800 and 1000 gallon fuel capacity in one bow, two wing and two stern tanks located in the bow, amidships and aft. Fuel tank surfaces, where visible, appear satisfactory and the securing mechanism appears good – excellent. The fuel fill, vent, feed and return lines and components appear satisfactory.

The client is the operator of the vessel and stated that he has been aboard as crew and operating the vessel for many years. He is in the process of purchasing the vessel, the purchase is no way dependent on this survey and this limitation was discussed with the client. The vessel was reportedly built in Long Beach, California in 1973 and 1974. The vessel was stretched by 14’, which was added amidships in 1996 at Fashion Blacksmith, Crescent City, California. The engine is reportedly original and it was originally rated at 335 h.p. and has been de-powered to 250 h.p. It was rebuilt in the fall of 2010 at Westport Diesel, Westport, Washington. The vessel is used to troll for Albacore tuna. The operator reports that the vessel uses 100 gallons of fuel per day in average and the largest haul has been 72-tons. The operator is a prior working engineer and he exhibited extensive knowledge of the vessel and its systems. He stated an ultra-sonic inspection found the hull plating in good condition, with 5/16” being the “thinnest” spot near the rudder. This area was cut out and replaced. He stated that he performed a “re-wiring” of the vessel in May of 2011. The vessel is basically structurally and mechanically sound. Upon completion of recommendations and a few ongoing projects, the vessel will be suitable for its intended purpose as a commercial trolling vessel.

1. Clean the steaming light which is covered with soot to allow proper visibility. Modify as necessary to eliminate the repetition of this condition.
2. Conclude the installation of the satellite compass, the unit has been purchased and is aboard.
3. Secure the auxiliary engine’s crank case ventilator collector to prevent any accidental spill of oil into the bilge.

1. There is Splash Zone on top of the raw water pump and the operator states that this was a repair for a minor leak. Monitor this condition and repair if/as necessary.
2. Address the flinging of oil/grease by the PTO forward of the main engine, modify to eliminate this condition. Clean grease and oil to allow detection of any future weeps or problems.
3. Clean the water from the engine room bilge; it is reportedly residual from cleaning the engine room.
4. Complete minor maintenance projects pending on the auxiliary engine.