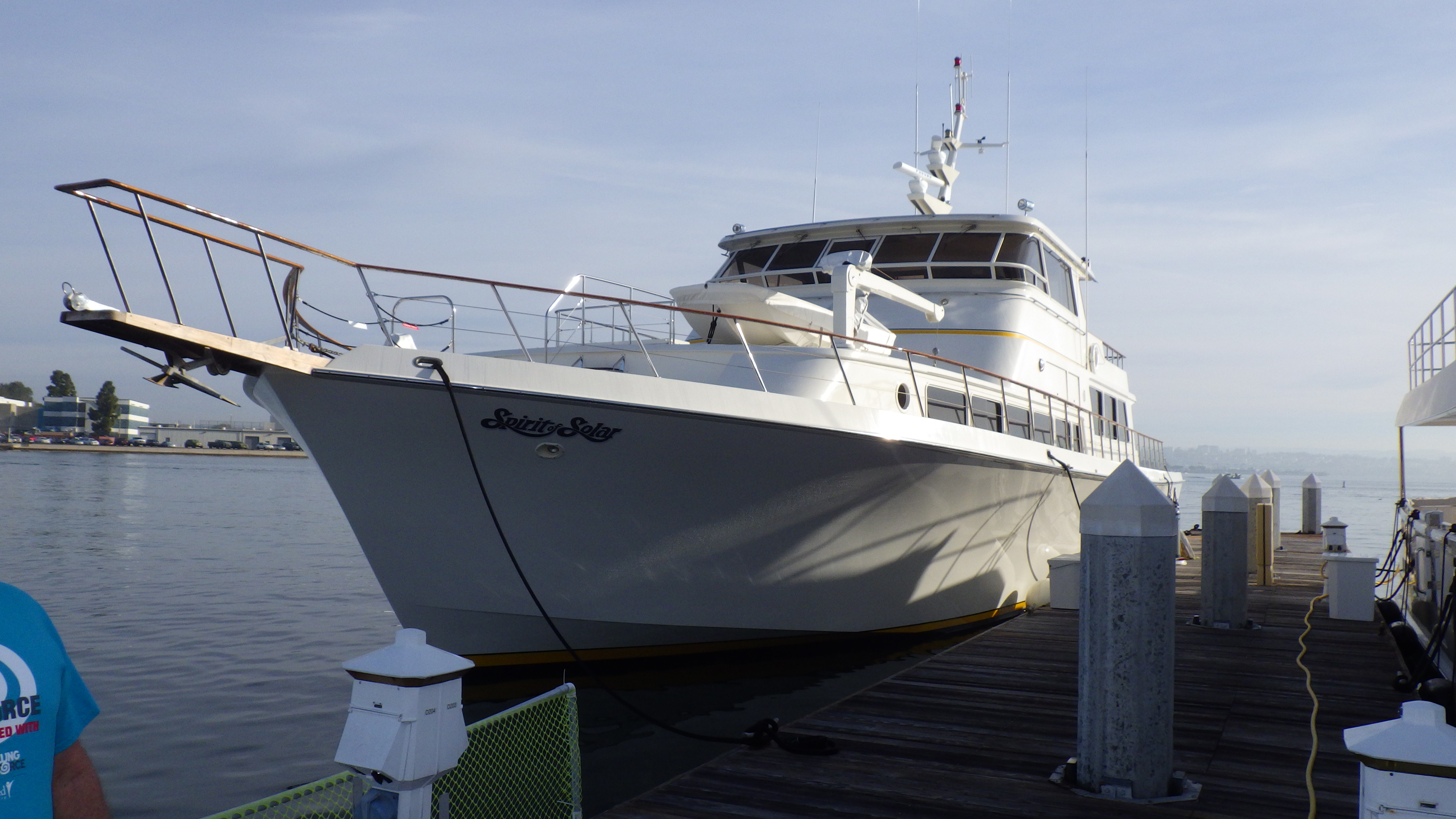 The vessel was inspected while afloat. Hull construction material is fiberglass over plywood (4 x .5” plywood layers).  Deck is constructed of fiberglass over plywood and above deck structures are constructed of fiberglass over plywood.  Bulkheads are constructed of plywood.  Overall condition of the hull structure appears good.  The vessel’s weight is 200,000 lb. (reported).  Exterior rails and hardware appear good.  Cosmetic condition of vessel appears satisfactory – good externally and satisfactory – good internally.  Vessel’s external colors are white with yellow boot stripe.  Below waterline through hull fittings appear good.  The vessel is equipped with one engine driven and two Rule 1500, one Rule 3700 and one Flotec (six in total reported) electric / automatic bilge pumps that appear good and the bilge is holding minimal water.  The ventilation system consists of two blowers and natural ventilation and appears satisfactory.  General housekeeping appears good – excellent.

The actual cash value is the value that our research approximates the selling price of this vessel should be, at the time and place of our inspection.  The actual cash value is best determined by a thorough market search to determine what vessels are available on the market, followed by negotiations between the interested parties.  Consideration is given to vessel’s condition, geographic location, published listings and guides, comparable sales and listings, and market conditions.  The new replacement value is the cost of this or a similar, new vessel, comparably equipped.  The investment is the reported investment including purchase price and significant upgrades.  No values include maintenance costs, storage or tax.

C & V Form Key:        All systems are rated based upon their appearance, ratings include: Not examined, Not applicable, Faulty, Marginal, Satisfactory, Good, Excellent.

This survey sets forth the condition of the vessel and components, as specifically stated only, at the time of inspection and represents the surveyor’s honest and unbiased opinion. The submitting of this report should not be construed as a warranty or guaranty of the condition of the vessel, nor does it create any liability on the part of Christian & Company or the individual surveyor.  No part of the vessel was disassembled or removed and no assumptions should be made as to the condition of concealed components.  Specifics were obtained from sources available at the time of inspection and are believed correct, but are not guaranteed to be accurate.  This inspection was performed for the expressed purpose of obtaining insurance/finance and should provide the information necessary for underwriting purposes. If any additional information is required, please contact the undersigned.  This survey report is not intended for use as a “buyer’s survey”.