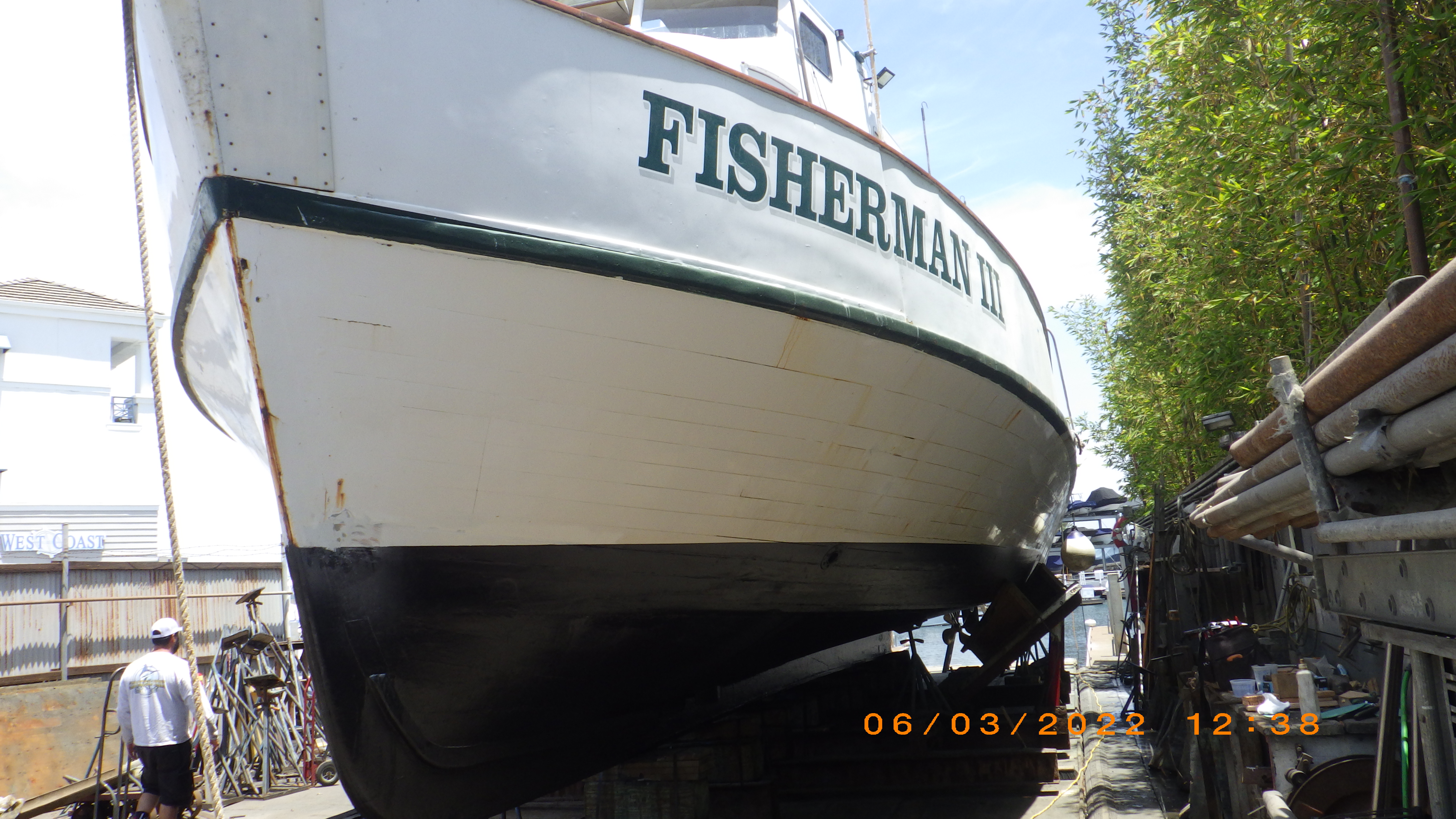 The vessel was examined by the surveyor and/or surveyor’s agents from all accessible areas of the interior without removal of secured panels, destructive testing or disassembly. The hull bottom laminate, plating and/or planking was examined by percussion sounding and visual inspection only. No moisture content readings were taken, and no destructive testing was performed. The surveyor may have used a moisture meter if/when they deemed it useful or if specifically requested by client.

Exterior hardware was visually examined for damage and drive components were tested by sight only. The inspection of engines, generators, machinery and related mechanical systems is not within the scope of this survey. Only a brief cursory inspection of the machinery was conducted, and no opinion of their overall condition was formed. Client shall retain the services of a qualified mechanic, engine surveyor or other expert to inspect such engine, generators, machinery and related mechanical systems. Tankage was inspected from visible surfaces only and no opinion was rendered as to their overall condition. On sailing vessels, the rig was not inspected aloft, nor were sails inspected unless they were visible during a sea trial. Client shall retain the services of a qualified rig surveyor or other expert to inspect sails, rigging and equipment. The electrical system was visually inspected where accessible, and electronic and electrical components powered only with permission of or in the presence of the vessel’s owner or agent. No in-depth testing or examination of the electrical system or electric schematic was conducted. Specifications were taken from published sources, measurements if made, should be considered approximate. The recommendations are based on federal and state regulations, industry standards, and/or surveyor‘s own personal experience.

The market value is based on research of available new/used comparable vessels, with consideration of geographic area where the vessel is located and reported sale prices where available. The surveyor will refer to and may reference CFRs, NFPA and ABYC recommendations (and/or other services) as the surveyor deems reasonable but not all regulations and recommendations will be applied nor should this report be relied upon as full compliance with the aforementioned entities. Every vessel inspection is different, and limitations may alter the scope of this survey, some limitations will be implied in the text of the report and some will be explicitly detailed. A Marine Survey Agreement which is reviewed and signed by the client details the terms governing this marine survey.

Vessel has two type A size II, type B:C size II portable fire extinguishers in the engine room and one in the galley, and two type A size II type B:C size I in the salon. All extinguishers have an April 2022 inspection tag. The vessel has one smoke alarm. The safety components include: numerous type I PFDs and a life ring with an MOB strobe light throwable PFD; distress flares were not inspected; six life floats with lights; first aid kit; 20 kw CLAW anchor with chain and line rode that appears satisfactory. Navigational and anchor lights appear satisfactory. The vessel includes no CO alarms. Vessel has an oil placard and waste placard, we did not see the navigation rules or a waste management plan. Other safety equipment includes: high water alarm, EPIRB (2027 battery).

The vessel is a wood plank on frame passenger fishing vessel equipped with two diesel engines and a diesel generator. The client purchased the vessel in July 2021 in San Diego. The vessel was built in Costa Mesa, CA. The client believes the engines are vintage 2009. The vessel was inspected while hauled, afloat and underway. While the vessel was hauled, two sections of a plank, to port forward at the waterline, were replaced. The engines’ sea water intake through hulls and sea strainers have been replaced with new components. The vessel was reportedly refastened prior to purchase, the client believes the entire vessel was refastened in sections. The hull bottom planks appeared tight and fair; no fasteners were pulled. The vessel has a Certificate of Inspection that expires on 20 July 2026 for 49 passengers, 57 persons total and for a route of lakes, bays and sounds plus limited coastlines (20 miles from a harbor of safe refuge).

Upon our arrival, the vessel was hauled, the stern of the vessel was hogging and deformed in a downward direction. There was visible separation between plank seams and between the vertical support in the bulkhead to port aft in the engine room. The client reports that this occurred when the vessel was previously hauled on a travel lift.

The vessel was launched and a U.S. Coast Guard inspector attended a brief sea trial in Newport Harbor. There was a water leak noticed at a plank seam to starboard aft in the engine room near the chine and below a fuel tank.

The vessel is basically structurally sound, the machine systems functioned normally. Upon completion of the recommendations the vessel should be suitable for its intended
purpose as a limited coast-wise and protected waters passenger fishing vessel.

The actual cash value is the value that our research approximates the selling price of this vessel should be, at the time and place of our inspection. Consideration is given to vessel’s condition, geographic location, published listings and guides, comparable sales and listings, and market conditions. The new replacement value is the cost of this or a similar, new vessel, comparably equipped. The investment is the reported investment including purchase price and significant upgrades. No values include maintenance costs, storage or tax.  We primarily use market value analysis methodology for determination of value.

1. There is an apparent buildup of salt crystals and wood deterioration aft of the generator. Remove the salt crystals and remove the deteriorated wood, eliminate any causes of these conditions and repair as necessary.
2. There is deterioration in the engine room aft, at and above the deck level including the deck beam. Address as necessary.
3. There is salt accumulation near the starboard bait pump through hull aft in the engine room, eliminate the source, remove the salt crystals to allow detection of any future weeps or leaks.
4. There is fuel forward in the engine room, a hose on the starboard engine reportedly failed on the way to the boatyard. Continue cleaning the fuel from the bilge to prevent discharging of fuel.
5. A bolt between the steering actuator and the starboard steering arm was inserted from below, the nut was found loose. Insert the bolt from the top and properly secure the nut.
6. The port inboard life float light did not illuminate, service and prove it properly functional.
7. There is corrosion on an electrical fuse on the terminal board to starboard below the helm console. Eliminate the cause of any corrosion, remove corrosion, and repair / replace as necessary.
8. Eliminate the water leaks which were found upon launching the vessel including one to starboard aft in the engine room at a plank seam and one through an apparent fastener hole below a fuel tank. Remove the water from the bilge to allow detection of any additional leaks. After the hull bottom planking swells, there should be minimal water in the bilge.
9. There are unused batteries including one by the house battery bank and one on deck, remove unused batteries from the vessel. We encourage installing the batteries in plastic boxes in compliance with ABYC recommendations.
10. We did not see the Certificate of Documentation aboard nor did we see the documentation number affixed to a structural member of the vessel. Assure the Certificate of Documentation is aboard and display the documentation number on a fixed structural member of the vessel per federal regulations.

1. The refrigerator to port in the galley has been removed, reinstall a refrigerator and remove the old one from the vessel.
2. The captain had trouble finding neutral at the engine controls, ensure that the neutral gear is easily discernable at the controls.
3. As the stern of the vessel is deformed downward, and there is deformation of plank seams causing gaps, separation of the bulkhead to frame junction to port aft in the engine room and likely deflection of other beams, monitor and address appropriately.
4. There are salt crystals on the endcaps of the engines’ heat exchangers, service appropriately.
5. There is salt on a water injection hose into the starboard engine exhaust, there is corrosion on several of the engines’ exhaust hose clamps. Service the exhaust system, eliminate any leaks and replace corroded clamps.
6. The starboard propeller shaft seal’s hose is delaminating, monitor and replace as necessary.
7. There is physical damage to the starboard propeller shaft, near the strut, monitor and address if necessary.
8. The keel is deformed under the aft keel block, monitor and address if necessary.
9. There are anomalies on the hull bottom including paint buildup at likely butt seams, consider removing all bottom paint during a future haul out to allow better inspection of the condition of the hull bottom. Address deficiencies.
10. There are metal patches on the hull bottom, we encourage removing the patches during a future haul out and addressing any deficiencies below the patches.

The statements of fact contained in this report are true and correct. The reported analyses, opinions, and conclusions are limited only by the reported assumptions and limiting conditions, and are my/our personal, unbiased professional analyses, opinions, and conclusions. I/we have no present or prospective interest in the vessel that is the subject of this report, and I/we have no personal interest or bias with respect to the parties involved. My/our compensation is not contingent upon the reporting of a predetermined value or direction in value that favors the cause of the client, the amount of the value estimate, the attainment of a stipulated result, or the occurrence of a subsequent event. I/we have made a personal inspection of the vessel that is the subject of this report. This report should be considered as an entire document. No single section is meant to be used except as part of the whole. This report is submitted without prejudice and for the benefit of whom it may concern. This report does not constitute a warranty, either expressed, or implied, nor does it warrant the future condition of the vessel. It is a

statement of the condition of the vessel at the time of survey only. The submitting of this report creates no liability on the part of Christian & Company or the individual surveyor. This survey report is not intended for use as a “buyer’s survey”.