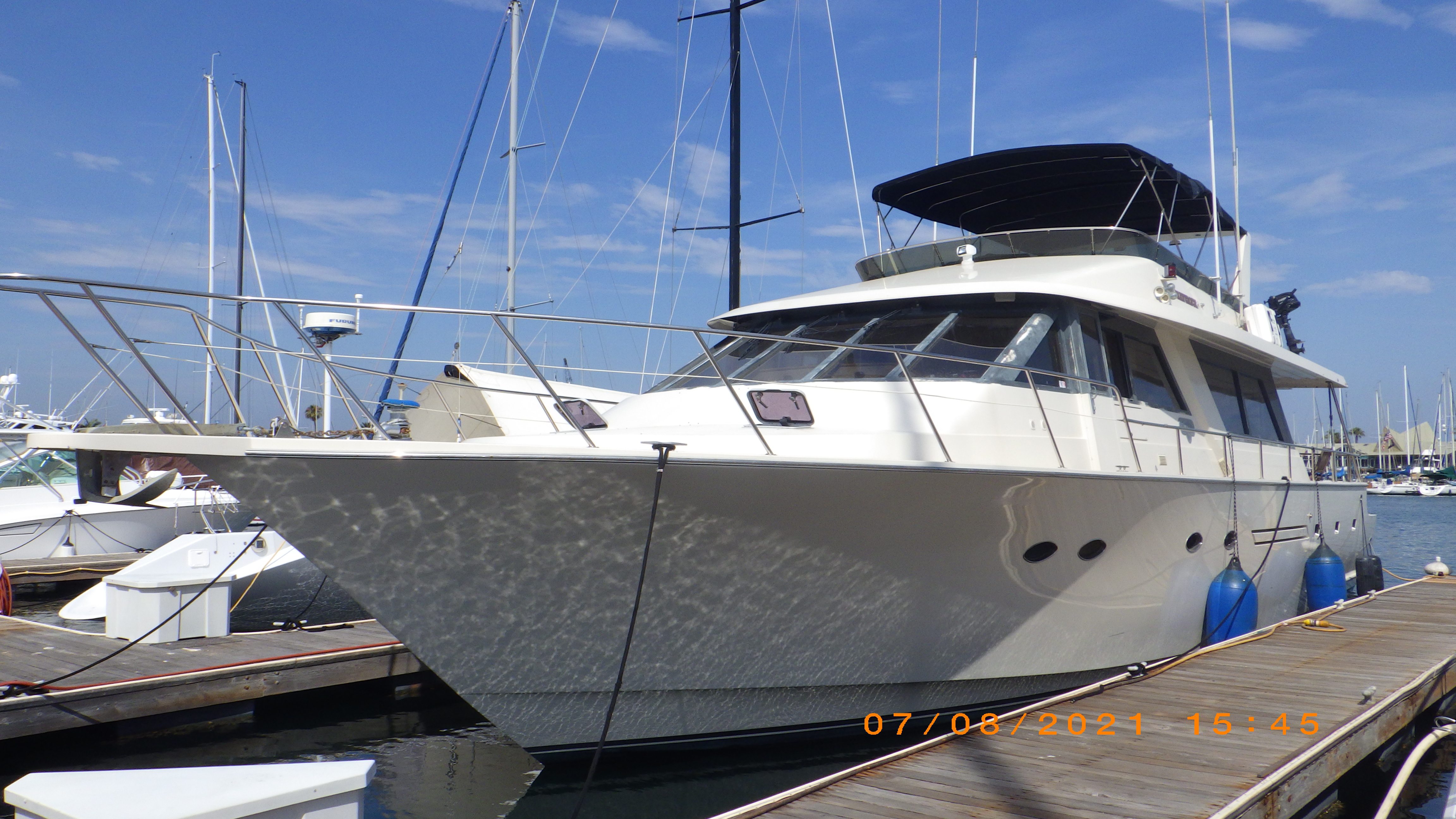 The vessel was examined by the surveyor and/or surveyor’s agents from all accessible areas of the interior without removal of secured panels, destructive testing or disassembly. The hull bottom laminate, plating and/or planking was examined by percussion sounding and visual inspection only. No moisture content readings were taken, and no destructive testing was performed. The surveyor may have used a moisture meter if/when they deemed it useful or if specifically requested by client.
Exterior hardware was visually examined for damage and drive components were tested by sight only. The inspection of engines, generators, machinery and related mechanical systems is not within the scope of this survey. Only a brief cursory inspection of the machinery was conducted, and no opinion of their overall condition was formed. Client shall retain the services of a qualified mechanic, engine surveyor or other expert to inspect such engine, generators, machinery and related mechanical systems. Tankage was inspected from visible surfaces only and no opinion was rendered as to their overall condition. On sailing vessels, the rig was not inspected aloft, nor were sails inspected unless they were visible during a sea trial. Client shall retain the services of a qualified rig surveyor or other expert to inspect sails, rigging and equipment. The electrical system was visually inspected where accessible, and electronic and electrical components powered only with permission of or in the presence of the vessel’s owner or agent. No in-depth testing or examination of the electrical system or electric schematic was conducted. Specifications were taken from published sources, measurements if made, should be considered approximate. The recommendations are based on federal and state regulations, industry standards, and/or surveyor‘s own personal experience.
The market value is based on research of available new/used comparable vessels, with consideration of geographic area where the vessel is located and reported sale prices where available. The surveyor will refer to and may reference CFRs, NFPA and ABYC recommendations (and/or other services) as the surveyor deems reasonable but not all regulations and recommendations will be applied nor should this report be relied upon as full compliance with the aforementioned entities. Every vessel inspection is different, and limitations may alter the scope of this survey, some limitations will be implied in the text of the report and some will be explicitly detailed. A Marine Survey Agreement which is reviewed and signed by the client details the terms governing this marine survey.

The vessel was inspected while afloat. Hull construction material is molded fiberglass. Deck is constructed of molded fiberglass (some teak planking) and above deck structures are constructed of molded fiberglass. Coring is Airex foam. Bulkheads are constructed of unknown material. Overall condition of the hull structure appears good. The vessel’s weight is unknown. Exterior rails and hardware appear satisfactory. Cosmetic condition of vessel appears marginal externally and internally. Vessel’s external colors are white with a black boot stripe and black about windows. Below waterline through hull fittings appear satisfactory (not tested). The vessel is equipped with two seen /five switches for electric and electric / automatic bilge pump that appear satisfactory and the bilge is holding minimal water (and oil in engine room). The ventilation system consists of blowers and natural ventilation and appears satisfactory.
General housekeeping appears satisfactory.

The vessel is a composite fiberglass flybridge, cockpit, motor yacht equipped with two diesel engines and two diesel generators. The vessel was built in Delta, BC, Canada. The client reportedly purchased the vessel in 2002. She believes that the machine systems are original. The vessel was surveyed while afloat, the machine systems were not tested, no sea trial was performed and the vessel was not hauled. Miscellaneous electronic and electrical components were tested. The vessel has been upgraded with electronics, but much of the vessel appears to be original equipment. The vessel is basically structurally sound and exhibits normal age related wear typical for a vessel with no major refit. While the vessel is well built and was well equipped at the time of its
construction, most systems and components are dated.

Explanation of value opinion: The value is based on the soldboats.com reported sale prices and the yachtworld.com asking prices below and we interviewed two knowledgeable brokers. The three West Bay 72 sold prices are 2004 – $1,225,000, 2003 – $1,100,000 and 1993 – $780,000, the information available suggests they all are in significantly better/upgraded condition and thus the value is lower. The value assumes the normal operation of the systems (all of which were not tested). The listings are provided per the search parameters without edit, providing a good range of value for similar size and age boats, however of various quality. The West Bay is of higher quality than most of the comparable boats.

As this report is an appraisal, it does not include recommendations. A few items of note are listed below. There are numerous color differences, rub marks and scratches on the hull sides and transom and the black accent areas above the windows are faded. The hatches are crazed, there is water damage in many places on the interior of the vessel and there is oil in the engine room bilge. There is salt and staining on through hulls to port aft in the engine room. The galley refrigerator has been replaced and the new refrigerator’s installation is not well finished. There is corrosion on the pilothouse wing doors. There is corrosion on the forward AC source selector switch, visible behind the panel. The interior finishing and upholstery exhibits age related damage.