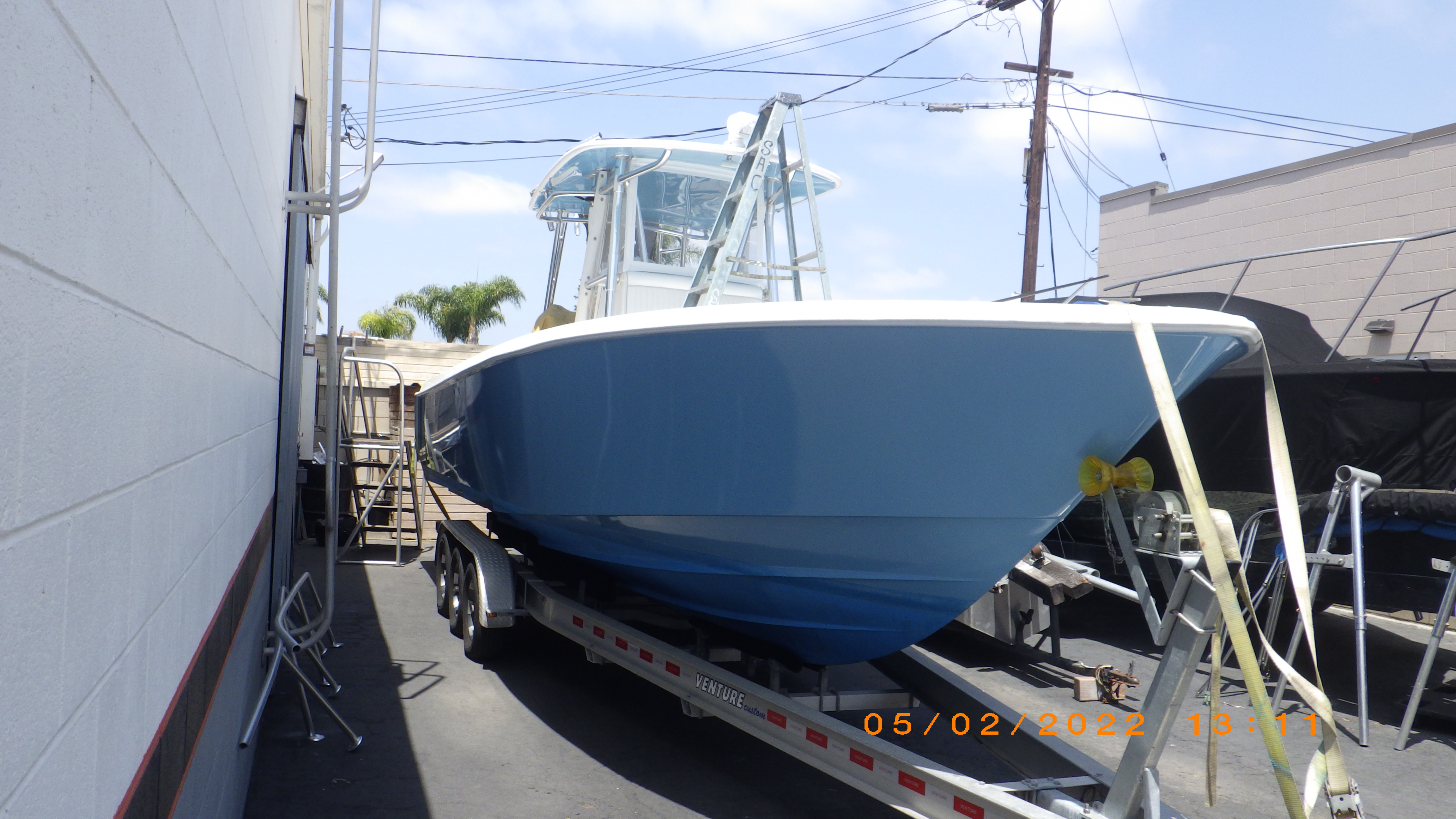 The vessel was examined by the surveyor and/or surveyor’s agents from all accessible areas of the interior without removal of secured panels, destructive testing or disassembly. The hull bottom laminate, plating and/or planking was examined by percussion sounding and visual inspection only. No moisture content readings were taken, and no destructive testing was performed. The surveyor may have used a moisture meter if/when they deemed it useful or if specifically requested by client.
Exterior hardware was visually examined for damage and drive components were tested by sight only. The inspection of engines, generators, machinery and related mechanical systems is not within the scope of this survey. Only a brief cursory inspection of the machinery was conducted, and no opinion of their overall condition was formed. Client shall retain the services of a qualified mechanic, engine surveyor or other expert to inspect such engine, generators, machinery and related mechanical systems. Tankage was inspected from visible surfaces only and no opinion was rendered as to their overall condition. On sailing vessels, the rig was not inspected aloft, nor were sails inspected unless they were visible during a sea trial. Client shall retain the services of a qualified rig surveyor or other expert to inspect sails, rigging and equipment. The electrical system was visually inspected where accessible, and electronic and electrical components powered only with permission of or in the presence of the vessel’s owner or agent. No in-depth testing or examination of the electrical system or electric schematic was conducted. Specifications were taken from published sources, measurements if made, should be considered approximate. The recommendations are based on federal and state regulations, industry standards, and/or surveyor‘s own personal experience.
The market value is based on research of available new/used comparable vessels, with consideration of geographic area where the vessel is located and reported sale prices where available. The surveyor will refer to and may reference CFRs, NFPA and ABYC recommendations (and/or other services) as the surveyor deems reasonable but not all regulations and recommendations will be applied nor should this report be relied upon as full compliance with the aforementioned entities. Every vessel inspection is different, and limitations may alter the scope of this survey, some limitations will be implied in the text of the report and some will be explicitly detailed. A Marine Survey Agreement which is reviewed and signed by the client details the terms governing this marine survey

There is unknown gallon capacity in two tanks, and they were not seen. The fuel fill, vent and feed lines and components appear satisfactory, with some damage to hoses.
Fuel fill to tank bonding was not seen.

The vessel was not inspected at its normal storage location.

The vessel is a composite fiberglass center console equipped with two gasoline outboard engines. The vessel was built in Homestead, Florida. The client purchased the vessel in December 2020 and the engines are apparently original. The undersigned was involved with a damage claim on the vessel which occurred during the shipping of the vessel. The hull sides and transom have been painted. The vessel is located at a marine fabrication facility and the installation of a Marlin top, on top of the T-top, is in process. Some components previously mounted on top of the T-top and the trim motor assemblies inside the center console have been disconnected. For the purpose of this survey we will assume the successful completion of the ongoing modification, that the engines are properly functional (with known low compression issues) and the structure is basically sound. The vessel was inspected on its trailer, the engines were not test operated and no sea trial was performed. Recommendations are not a part of
appraisals, however, we did note age damage and abrasion to several of the gasoline hoses and suggest they all be inspected and any deficiencies addressed.

The actual cash value is the value that our research approximates the selling price of this vessel should be, at the time and place of our inspection. Consideration is given to vessel’s condition, geographic location, published listings and guides, comparable sales and listings, and market conditions. No values include maintenance costs, storage or tax. The most relevant data found while researching the value is included below. We primarily use market value analysis methodology for determination of value. The value of the trailer is included.

Explanation of value opinion: The value is based on the soldboats.com reported sale prices and the yachtworld.com and boat trader asking prices below. All the soldboats comps have original engines, as does the 2014 32 asking $225,000. The 2014 asking $275,000 has newer engines, still under warranty. The value balances the continued upward influence of the Covid-19 induced demand and vessel location with the questionable condition of the engines, as confirmed by a compression test the undersigned reviewed, which shows low compression in two cylinders to port and one to starboard). We also searched other sites, including Facebook. We found on 2006 36 Contender asking $175,000 in San Diego. We spoke with Mr. John who is currently selling a 2017 Contender 32ST in South Florida and is asking $140,000 (highest offer to date is $133,000). His vessel has a half tower with a helm station and his engines have 5,000 hours. His vessel has not had the exterior cosmetic upgrade that the surveyed vessel has had. The significance of the high hour engines is uncertain, but there is a reduction in the value above based on the engine hours. The location of the vessel is also a positive influence.

This survey is for the express purpose of appraisal. It is not meant as a buyer’s survey.