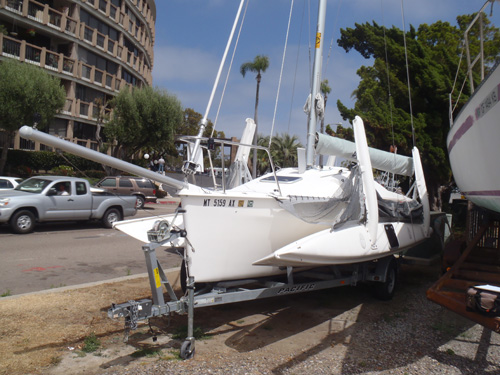 This inspection was performed upon the request of the client listed above on October 9, 2012 while the vessel was afloat on (removed for privacy)

Comments: The vessel was inspected while afloat. The hull bottom and center board were not inspected. The hull sides and transom were visually inspected and randomly sounded. The hull sides and transom are in good structural and cosmetic condition. The deck and superstructure were visually inspected and randomly sounded. The deck and superstructure are in good structural and cosmetic condition. There are stress cracks on the anchor rode locker hatch and around the anchor rode locker cut out. There are stress cracks on the companionway hatch. The deck hardware including safety rails, mooring devices and hatches was visually inspected and most hatches were opened and closed. Overall the deck hardware is in good condition. The outboard forward fastener for the port forward trampoline is missing. The structural reinforcements including the longitudinal stiffeners and bulkheads were visually inspected and randomly sounded. The structural reinforcements appear to be in “as-built” condition. The bilge is holding minimal water in both amas. There are salt crystals in the cabin bilge. There is minimal water about the transducers. The interior cabin spaces are neat, clean and orderly. The interior of the vessel is in satisfactory – good cosmetic condition. This survey is not a mould inspection. The condition of the coring, in the stringers, deck, and elsewhere as applicable, is beyond the scope of this inspection.

Comments: The vessel is equipped with a portable plastic gasoline tank, supplying the outboard engine. The tank is located in a port designed storage locker aft in the cockpit. There is a second portable gasoline container in the starboard aft cockpit storage area. As the fuel tanks are portable, there are very few regulatory requirements.

Comments: The electrical system including the battery, wiring, circuitry components and circuit protection equipment was visually inspected and most components were tested. Overall the electrical system is in satisfactory condition. The battery is brand new; there is no battery charger, the outboard engine may provide charging for the battery though this function is beyond the scope of this inspection.

Comments: Safety equipment for fire fighting protection appears satisfactory however the extinguisher has not been inspected, tagged and maintained per N.F.P.A. recommendations. Personal flotation devices appear suitable for near coastal use. There are no distress signal flares aboard. No sound signaling device or required placards are aboard. The navigational lights include combination bow light and a stern light. The stern light is inoperative. There was no steaming light or all around/anchor light seen. The ground tackle including the anchor and rode was visually inspected as installed and appears satisfactory. The entire length of the anchor rode was not inspected and should be inspected prior to use.

Comments: The mast and associated rigging were visually inspected from the deck level only. The mast and associated rigging is likely original. This survey is not a rig survey; please consult with a qualified rigger for greater detail as to the condition of the sailing system. The vessel was not taken on a sea trial and sailed during the survey. We did open and feel the jib and mainsail. The sails are not crisp and based on the feel have had normal use. It is assumed the sails are original, though their age is unknown. The spinnaker feels as if it has seen less use than the main and the jib. The jib is dirty. The sail track on the mast is not straight. Overall the sailing system is in satisfactory condition.

The vessel is a production fiberglass trimaran equipped with a gasoline outboard engine. The vessel is manufactured in Chula Vista, California. The outboard hulls (floats or amas) are hinged and fold up to allow the vessel to sit on a trailer. The vessel was inspected while afloat, the hull bottom was not inspected, the amas were not folded and the vessel was not taken on a sea trial during this survey. The vessel appears basically structurally sound. Upon completion of the recommendations, the vessel should be well suited for its intended purpose as a protected waters and coastal cruising vessel.