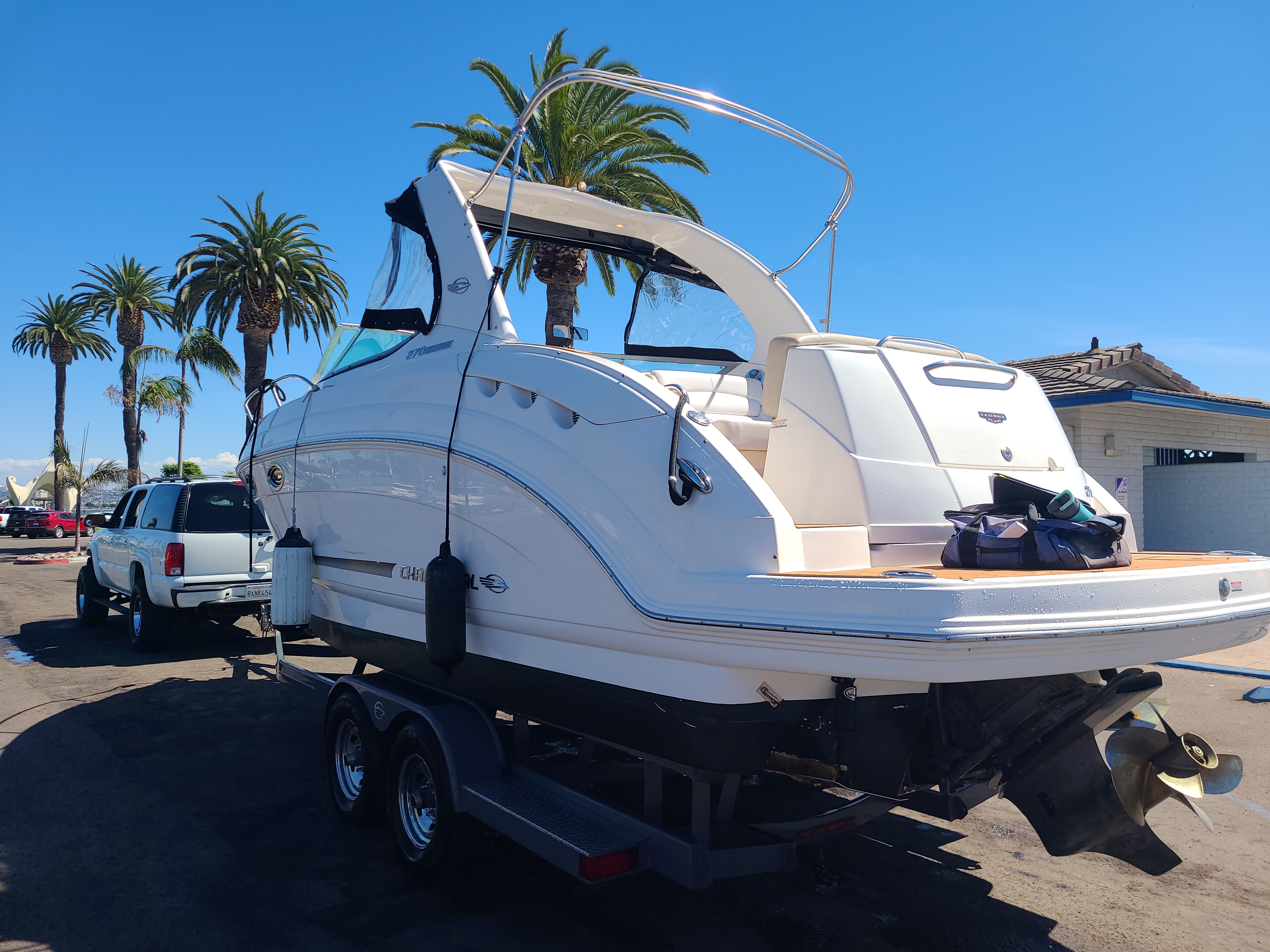 The vessel was examined by surveyor and/or surveyor’s agents from all accessible areas of the interior without removal of secured panels, destructive testing or disassembly. The hull bottom laminate, plating and/or planking was examined by percussion sounding and visual inspection only. No moisture content readings were taken, and no destructive testing was performed. The surveyor may have used a moisture meter if/when they deemed it useful or if specifically requested by client. Exterior hardware was visually examined for damage and drive components were tested by sight only. The inspection of engines, generators, machinery and related mechanical systems is not within the scope of this survey. Only a brief cursory inspection of the machinery was conducted, and no opinion of their overall condition was formed. Client shall retain the services of a qualified mechanic, engine surveyor or other expert to inspect such engine, generators, machinery and related mechanical systems. Tankage was inspected from visible surfaces only and no opinion was rendered as to their overall condition. On sailing vessels, the rig was not inspected aloft, nor were sails inspected unless they were visible during a sea trial. Client shall retain the services of a qualified rig surveyor or other expert to inspect sails, rigging and equipment. The electrical system was visually inspected where accessible, and electronic and electrical components powered only with permission of or in the presence of the vessel’s owner or agent. No in-depth testing or examination of the electrical system or electric schematic was conducted. Specifications were taken from published sources, measurements if made, should be considered approximate. The recommendations are based on federal and state regulations, industry standards, and/or surveyor’s own personal experience. The market value is based on research of available new/used comparable vessels, with consideration of geographic area where the vessel is located and reported sale prices where available. The surveyor will refer to and may reference CFRs, NFPA and ABYC recommendations (and/or other services) as the surveyor deems reasonable but not all regulations and recommendations will be applied nor should this report be relied upon as full compliance with the aforementioned entities. Every vessel inspection is different, and limitations may alter the scope of this survey, some limitations will be implied in the text of the report and some will be explicitly detailed. A Marine Survey Agreement which is reviewed and signed by the client details the terms governing this marine survey.

Layout/interior components: Express cruiser, engine room is located aft and accessed with a sole hatch, helm is to starboard forward, companionway forward leads to the cabin, berth aft, galley to port, head to starboard and seating is forward with removable table

Location of through hulls as visible: Transom drain plug and two transducers located on either side forward of the engine

Comments: The engine and outdrive were visually inspected and tested during a sea trial. The survey is not a mechanical inspection, please consult with a qualified technician for greater detail as to the condition of the machine systems. Wide open throttle is recorded as 5400 rpm per the tachometer with a top speed of 37.5 miles per hour per the Garmin multi-function device. The hour meter displayed 1589.5 hours and is reportedly inaccurate. The speedometer was constantly running a self-test on the way from the slip to the boat ramp but functioned properly after going back into the water. The external surface and peripheral components of the engine and outdrive appear satisfactory – good. The engine controls functioned normally. The exhaust system is properly arranged and installed. The propulsion components including the propellers were visually inspected. Overall the propulsion components are in satisfactory condition. The steering system was visually inspected and test operated. The steering system functioned normally. The engine room blowers were energized. The blowers do not reach the lowest point of the engine room bilge. The through hulls were visually inspected. The through hulls are in satisfactory condition. The seawater systems were visually inspected and most components were tested. Overall, the seawater systems are satisfactory. The electric bilge pumps were energized manually.

Holding: Four gallon capacity * in one plastic tank to starboard forward in the engine room, fitting, located starboard aft, marked with a “toilet”

Comments: The fuel system including the tank, fill, vent and feed lines was visually inspected as installed. Where visible the fuel system components are in satisfactory-good condition. The condition and age of the fuel, water and the integrity of the tanks (fuel, water and holding) and hoses is beyond the scope of this survey. Please consider filling all tanks for a simple, practical test of their integrity. The water pressure system did not function normally. The cockpit shower leaked at the back side of the valve handles and there was low to no water pressure from the shower head. The water heater got warm but not hot. Accuracy of tank level gauges is beyond the scope of this survey.

Comments: The electrical system including the shore power cord, shore power inlet, batteries, wiring, circuitry components and circuit protection equipment was visually inspected and most components were tested. Overall the electrical system is in satisfactory – good condition, except where noted. The shower sump pump did not energize. The labels on the toggle switches at the helm are difficult to read. The condition of the batteries is beyond the scope of this inspection.

Comments: Safety equipment for fire fighting protection appears satisfactory, however the extinguishers have not been inspected, tagged and maintained per N.F.P.A. recommendations. Personal flotation devices appear suitable for near coastal use. There are no current distress signal flares are aboard. A suitable sound signaling device was seen. The CO alarm has been removed. There is no smoke alarm. Garbage and oil placards were seen. A waste management plan was seen. The navigational and anchor lights are properly arranged, installed and functional. The combination bow light did not function. The ground tackle including the anchor and rode was visually inspected as installed and appear satisfactory. The entire length of the anchor rode was not inspected and should be inspected prior to use.

The vessel is a production fiberglass express cruiser equipped with a single gasoline inboard / outdrive engine. The vessel was built in Nashville, Georgia. The current owner reported that she purchased the vessel from Rock Harbor Boats in Seattle, Washington approximately two years ago. She reported that the engine was replaced by Rock Harbor boats under warranty prior to her purchase. She reported that the outdrive is original. She reported that the anti-fouling paint is approximately one year old and was applied in either May or July. She had no disclosures and had no knowledge of any significant events in the vessel’s history such as submersions, collision, fire, etc. The vessel was inspected while afloat, underway on a sea trial in San Diego Bay and while on a trailer. The vessel is basically structurally sound and upon completion of the recommendations should be suitable for its intended purposed as a near coastal cruising vessel.

Explanation of value opinion: The value is based on the Soldboats.com reported sales prices, Yachtworld.com and Boattrader.com current listings below. Vessels that have sold for a higher average and are listed at a higher average than those on the West Coast. There was limited data for vessels listed on the West Coast, so our research was expanded to include other states; vessels that sell on the West Coast typically hold a different value than those that sell on the East Coast. The vessels listed in Largo, FL, Burgess, VA, Middle River, MD and Quebec, Canada are equipped with gasoline generators, increasing their value. The sale of the vessel includes a trailer; the value we have placed is on the vessel, the value of the trailer is beyond the scope of this inspection. The surveyed vessel has had its engine replaced under warranty, the reason was unclear. The values of vessels have continued to increase due to the Covid-19 induced demand; the future of the value spike is unknown.

1. Maintain the fire extinguishers per NFPA recommendations. Extinguishers should be inspected and tagged annually and inspected by a qualified technician or replaced every 6 years.
2. Provide federally required, approved and current distress signal flares.
3. Service or replace components in the bow light and prove it properly functional.
4. The blowers do not reach the lowest part of the bilge. Assure that they are able to pull air from the lowest point in the bilge per ABYC recommendations.
5. The registration numbers on the vessel are Washington decals and the vessel is currently registered in California. Apply the current decals and bring aboard the current registration.
6. The cockpit shower leaked at the back side of the valve handles and there was low to no water pressure from the shower head. Determine the cause of the leak, eliminate the cause, service or replace component as necessary and prove the cockpit shower properly functional (as desired).

The statements of fact contained in this report are true and correct. The reported analyses, opinions, and conclusions are limited only by the reported assumptions and limiting conditions, and are my/our personal, unbiased professional analyses, opinions, and conclusions. I/we have no present or prospective interest in the vessel that is the subject of this report, and I/we have no personal interest or bias with respect to the parties involved. My/our compensation is not contingent upon the reporting of a predetermined value or direction in value that favors the cause of the client, the amount of the value estimate, the attainment of a stipulated result, or the occurrence of a subsequent event. I/we have made a personal inspection of the vessel that is the subject of this report. This report should be considered as an entire document. No single section is meant to be used except as part of the whole. This report is submitted without prejudice and for the benefit of whom it may concern. This report does not constitute a warranty, either expressed, or implied, nor does it warrant the future condition of the vessel. It is a statement of the condition of the vessel at the time of survey only. The submitting of this report creates no liability on the part of Christian & Company or the individual surveyor.