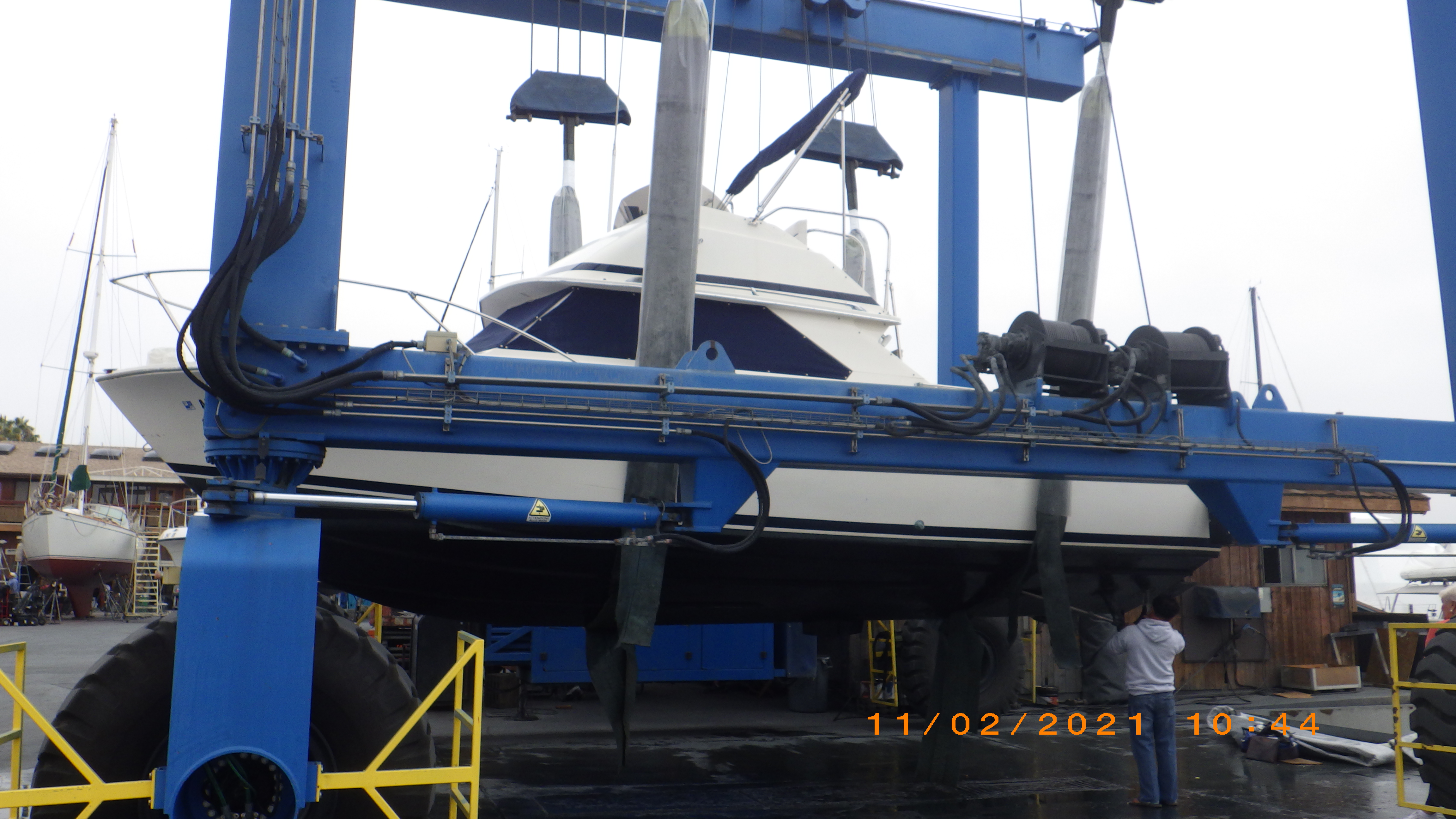 This inspection was performed upon the request of the client listed above on November 2, 2021 while the vessel was hauled at Shelter Island Boatyard and afloat in Shelter Island Marina, San Diego, CA and the owners and clients attended.

Comments: The vessel was inspected while hauled and afloat. The hull bottom was visually inspected and randomly sounded. The hull bottom is in satisfactory structural condition. The current owner reports that the bottom paint is 3 – 4 years old, it exhibited satisfactory coverage and no significant marine growth, however, the bottom had been cleaned three days prior to the survey. The antifouling paint was thin on the transom. The hull sides and transom were visually inspected and randomly sounded. The hull sides and transom are in satisfactory structural and cosmetic condition. There are several 3” circular color differences on both hull sides, the cause is beyond the scope of this survey but they may be prior repairs. There is miscellaneous rub rail damage, more significantly forward. There are groups of arching stress cracks on both hull sides forward, more significantly to port, and there were audible differences on both hull sides forward. We inspected the interior of the hull in these areas, longitudinal reinforcements stop before the bow but no secondary bonds are compromised. The deck and superstructure were visually inspected and randomly sounded. The deck and superstructure are in satisfactory structural and satisfactory – marginal cosmetic condition. There are numerous stress cracks concentrated about the edge of the deck on the transom and both sides. There are numerous small cracks / crazing. The gelcoat is thin in many locations on the deck and superstructure, revealing the darker laminate below. There are numerous holes about the deck and superstructure remaining from where components have been removed. The deck hardware including safety rails, mooring devices and hatches was visually inspected and most hatches and the port lights were opened and closed. Overall the deck hardware is in satisfactory condition. The engine hatches have no means to secure them when lifted. There is tape on the exterior of the hinge for the port windshield vent. Many of the fasteners are missing for the cockpit deck hatch, reportedly a result of the replacement of the fuel tank. There is corrosion on the windshield and window assemblies, primarily where hardware is fastened. The bow rail is loose at several junctions. There is fiberglass damage about the bow / trailering eye. The structural reinforcements including the stringers and bulkheads were visually inspected and randomly sounded. The structural reinforcements appear to be in “as-built” condition. The bilge is clean and dry. There is a waterline in the cabin bilge visible on the plastic water tank. The interior cabin spaces are neat, clean and orderly. The interior of the vessel is in satisfactory cosmetic condition. There are water stains visible on the exterior portion of the head enclosure, visible through the port aft window. The carpet and pad was wet aft in the cabin. This survey is not a mould inspection. The condition of the coring, in the hull, deck, and elsewhere as applicable, is beyond the scope of this inspection.

Location of through hulls as visible: See chart

Comments: The engines and transmissions were visually inspected and tested during a sea trial. This survey is not a mechanical survey, please consult with a qualified technician for greater detail as to the condition of the machine systems. A mechanic was aboard at the beginning of the survey, he read engine hours and they were reported to be 541 to starboard and 539 to port. There is no engine hour meter aboard. There are no functional audible engine alarms. The external surfaces and peripheral components of the engines and transmissions appear good. The current owner report that the engines were installed new in 2017. The flybridge engine instruments are “foggy”. Wide open throttle was 5,100 rpms on all four tachometers. Top speed averaged 28.4 knots. The trim tabs are not functional. The engine controls functioned normally. The exhaust system is properly arranged and installed. The propulsion components including the propellers, propeller shafts, struts and shaft seals were visually inspected. The propellers were percussion tested and spun with a fixed object adjacent to the blades. The propeller shafts were manipulated in the struts and observed while underway. Overall the propulsion components are in marginal condition. The propellers are different sizes, reportedly due to the gear ratio in the transmissions being different. There is corrosion visible on both propellers, more significant to port. The propeller nuts are eroded. The port strut has a different type of fastener with washers at the inboard aft corner. The current owner stated that the strut has had this condition since the family purchased the vessel in 1980. The steering system was visually inspected and test operated. The steering system functioned normally. The engine room blower was energized. The through hulls were visually inspected and the valves were manipulated. The through hulls are in satisfactory condition. The seawater systems were visually inspected and most components were tested. Overall, the seawater systems are satisfactory. The electric bilge pumps were not tested.

Comments: The fuel system including the tank, fill, vent, and feed lines was visually inspected as installed. The fuel tank was reportedly replaced in 2016 and it appears to have been replaced. The owner reports it was replaced in San Diego, likely by American Marine Tanks and it has a green coating. Where visible the fuel system components are in good condition. The port hull side tank vent fitting is corroded. The condition and age of the fuel (and water) and the integrity of the tanks (fuel, water, holding) and hoses is beyond the scope of this survey. Please consider filling all tanks for a simple, practical test of their integrity. The water pressure system functioned normally. The galley sink spigot valve is reversed from how it is marked (hot and cold). There were no quick disconnect hoses aboard and the freshwater and seawater washdowns were not tested. A hose is disconnected from a through hull to port aft, this reportedly serves the seawater washdown pump. The holding tank vent filter is in the port aft bilge, it is not connected to a hull side fitting. No hose is attached to the shower in the head. Accuracy of tank level gauges is beyond the scope of this survey.

Comments: The electrical system including the shore power cord, shore power inlet, batteries, wiring, circuitry components and circuit protection equipment was visually inspected and most components were tested. Overall the electrical system is in satisfactory condition. The condition and age of the batteries is beyond the scope of this inspection. The current owner reports the batteries are vintage 2017. There is a large DC fuse unsecured forward of the port engine; the current owner reports it serves the inverter. The inverter is in the locker in the head and it is not secure. The inverter was not tested. A GFCI outlet located below the dinette to starboard in the cabin was tripped and would not reset, there was no power to this outlet or the starboard outlet in the forward cabin. We could not get a response when testing the vhf radio on channel 27 or 16. The windlass is inoperative and the plastic case is damaged. The refrigerator is “iced over”.

Comments: Safety equipment for firefighting protection appears satisfactory however the extinguishers have not been inspected, tagged and maintained per N.F.P.A. recommendations. Personal flotation devices are suitable for near coastal use. Current distress signal flares are not aboard. The horn is inoperative. There are no CO, smoke or gasoline vapor alarms aboard. We did not see all legally required carriage items, including an oil placard or waste management plan. The navigational lights are properly arranged, installed and functional. There is no all-around / anchor light installed. The ground tackle including the anchor and rode was visually inspected as installed and appears satisfactory. There is no secondary anchor or rode aboard. The vessel has a CNG system including a bottle and a stove burner in the galley cabinet. The system was not tested or inspected. The entire length of the anchor rode was not inspected and should be inspected prior to use.

The vessel is a production fiberglass sportfishing vessel equipped with two gasoline engines. The vessel was built in Miami, Florida. The current owners reportedly purchased the vessel in 1980. There was transfer of ownership from a parent to the current owners in 1990. There was significant work reportedly performed in 2016 and 2017 including new engines, fuel tank, rudders, propeller shaft seals, propeller, propeller shafts, refrigerator, batteries, water heater and more. We did not review documentation to verify this work, it is clear that the engines, fuel tank and refrigerator have been replaced. The bottom was reportedly painted 3 – 4 years ago. The current owner disclosed that the windlass is inoperative. The current owner stated that there was a 1” diameter hole punched in the transom by another boat over 20 years ago in Newport Beach, CA. The vessel was inspected while hauled, afloat and underway in San Diego Bay. The vessel is basically structurally and mechanically sound and upon completion of the recommendations should be suited for its intended purpose as a coastal cruising and fishing vessel.