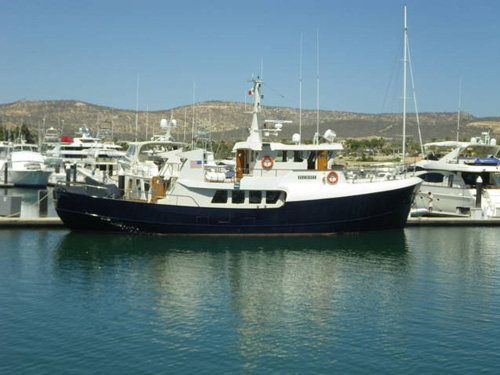 Athwartships/bulkheads/frames: Steel frames, ring bulkheads and full bulkheads, 4” frames on 14” centers (forward) Layout/interior components: Vessel boarded on either side through amidships bulwark boarding gates onto low side deck landings, forward from landings are watertight hatches into cabin spaces and steps up on both sides aft lead to aft deck. Aft deck has tender and crane, center line steps forward lead to upper deck, watertight hatch to starboard in superstructure leads into entryway to engine room. Ladder down into engine room and second door in entryway inboard leads to aft cabin space. Door from aft deck to interior space to port forward on aft deck. Main deck interior space aft has landing, door and steps down and aft to owner’s cabin; owner’s cabin has berth aft and ensuite head to port forward. Forward from landing is saloon, forward in saloon are wing doors to exterior side decks, galley to starboard forward, to port forward is ship’s office, two heads to starboard forward and anchor locker forward. Ladder from main deck to upper deck forward. Deck hatch and ladder to port aft of office leads to landing for crew cabins that are on both sides of landing, both crew cabins have bunk berths. Just aft of crew cabin hatch is similar hatch and ladder to guest cabins’ landing. Two guest cabins (one to port and one to starboard from landing) have bunk berths and ensuite heads. Pilothouse has helm forward, wing doors and aft door, dinette and modified Portuguese bridge forward (no safety rail on foredeck forward of forward gate).

Comments: The vessel was inspected while afloat. The hull bottom was not inspected. The hull sides were visually inspected only. The vessel was port side to the dock and was not turned during the survey. The starboard side was inspected from the shore and by looking over the gunnel. The hull sides are in good structural and satisfactory – good cosmetic condition. The vessel is a converted steel working boat and thus does not have a “yacht like” finish. The deck and superstructure were visually inspected. The deck and superstructure are in good structural and satisfactory – good cosmetic condition. The deck hardware including safety rails, mooring devices and hatches was visually inspected and most hatches were opened and closed. Overall the deck hardware is in good – excellent condition. The structural reinforcements including the bulkheads, frames and longitudinals were visually inspected. The structural reinforcements appear to be in “as-built” condition. The bilge is holding minimal water and oil in the engine room. The interior cabin spaces are neat, clean and orderly. The interior of the vessel is in satisfactory – good cosmetic condition. The vessel has a very unusual layout due to the fact that it is a converted fishing trawler. The main deck level is functional and fairly normal for a yacht; the pilothouse and exterior decks are also fairly normal. Forward on the Portuguese bridge is an open area with no safety rail and camber designed to shed water. The guest and crew cabins are entered through raised watertight hatches and vertical ladders. The cabins have no port lights and all four cabins have bunk berths. The cabins themselves and entry into the cabins are not “yacht like” and are the most obvious usability issue with respect to this conversion (from working fishing boat to yacht).

Comments: The engine and transmission were visually inspected. This survey is not a mechanical survey; please consult with a qualified technician for greater detail as to the condition of the machine systems. The external surfaces and peripheral components of the engine and transmission appear good. The client reports that the engine runs well; it was not tested and no sea trial was performed. The exhaust system is properly arranged and installed. The steering system was visually inspected. The steering system appears suitable. The propulsion components were not inspected. The client reports that the propulsion components have an issue; there is vibration which limits the top end performance of the vessel. The conversion and refit of the vessel was accomplished using miscellaneous components. The engine was reportedly rebuilt approximately 1,500 hours prior to it being acquired for the conversion. It had been used in a barge. The cause of the vibration is beyond the scope of this survey. The engine room blower was energized. The generator was visually inspected. The client reports that the generator functions normally. There are crystalline deposits at an end cap on the generator. The through hulls were visually inspected. The through hulls are in good condition. The seawater systems were visually inspected. Overall, the seawater systems are in good condition. The bilge pump was not tested. There is corrosion at the bottom of the exhaust for the diesel heater; there is a corroded hose clamp and there are stains in this area indicative of a leak.

Comments: The fuel system including the tanks, fill, vent and feed lines was visually inspected as installed. Where visible the fuel system components are in satisfactory – good condition. The condition and age of the fuel (and water) and the integrity of the tanks (fuel, water and holding) is beyond the scope of this survey. The water pressure system functioned normally. There are tin cans installed below various fittings to catch leaks. There are cans located below fuel fittings forward in the engine room. Components such as fuel hoses are labeled fuel hose, but are not labeled U.S.C.G. type A1, an American standard. The restoration of the vessel was accomplished in Holland.

Comments: The electrical system including the shore power cord, shore power inlet, batteries, wiring, circuitry components and circuit protection equipment was visually inspected and most components were tested. Overall the electrical system is in good condition. The condition of the batteries is beyond the scope of this inspection. The client stated that at least one battery requires replacement. The vessel uses welding cable extensively. Wires in the engine room are well organized, bundled and routed; however they are secured with plastic tie wraps. The lights in the landing areas for the guest and crew cabins function intermittently. The client has converted the transformer to an Asea converting transformer which allows the vessel to utilize any type of shore power and retain its European electrical system. Components aboard the vessel are “European” type.

Portable fire extinguishers: One in engine room entry, one in owner’s cabin, one in galley, one in both guest cabins, one in both crew cabins, not American type

Navigational/anchor lights: Lights on a mast on top of pilothouse and typical/international light scheme (not tested)

Comments: Safety equipment for fire fighting protection appears satisfactory. There is no fixed fire extinguishing system in the engine room. The portable fire extinguishers are not approved by the U.S.C.G. (currently irrelevant). Personal flotation devices appear suitable for near coastal use; they are not U.S.C.G. approved. Current distress signal flares are not aboard. We did not note the existence of a sound signaling device. The navigational and anchor lights are properly arranged and installed. The ground tackle including the anchor and rode was visually inspected as installed and appears satisfactory. The entire length of the anchor rode was not inspected and should be inspected prior to use.

The vessel was originally constructed in 1965 and used as a Northsea’s fishing trawler. The vessel suffered a catastrophic loss which was reportedly caused by the failure of a fishing boom, causing the vessel to roll, capsize and sink. The incident resulted in the loss of life. The vessel was subsequently salvaged and purchased by the previous owner, who converted it from a commercial vessel to a long range cruising yacht. The wheelhouse is aluminum; the engine is a diesel inboard engine, the vessel also has a “mule” diesel engine which powers the hydraulic system and a diesel generator. The refurbishment of the vessel was completed in 2007. The client provided an ultra sound inspection which was performed at the time of his purchase of the vessel in April 2010 in Enkhuizen, Holland. He also reviewed an ultra sound from five years prior; several areas of plating had apparently been replaced as the recent ultra sound revealed thicker plates. Overall the plate thickness is good. The client drove the vessel to Southhampton, England, the vessel was shipped to Palm Beach, Florida and then to Manzanillo, Mexico. The client drove the vessel from Manzanillo, Mexico to Puerto Vallarta and subsequently to San Jose del Cabo, Mexico, where it was inspected for this appraisal. Since purchase the client has upgraded the vessel with the installation of an Asea electrical transformer/converter, which allows him to utilize the existing electrical system with virtually any of the common power supplies throughout the world. The vessel is basically sound and suitable for its intended purpose as a long range cruising vessel.

The actual cash value is the value that our research approximates the selling price of this vessel should be, at the time and place of our inspection. Consideration is given to vessel’s condition, geographic location, published listings and guides, comparable sales and listings, and market conditions. The value does not include maintenance costs, storage or tax.

1. The client intends to bring the vessel to the United States; federally required “carriage items” will be needed. These include fire extinguishers, personal flotation devices, distress signal flares, sound signaling device, oil placard, trash placard.
2. Determine the source of the vibration reported while underway and address appropriately.
3. We strongly encourage replacing the plastic tie wraps used to secure wires in the engine room with metal (adel) clamps.
4. Service to eliminate any leaks above the various tin cans in several areas of the vessel.
5. Replace the battery which is reportedly at the end of its service life.
6. Address the corrosion on the bottom of the exhaust component for the diesel heater. Service to eliminate the apparent leaks near this component, clean stains to allow detection of any future leaks.
7. The vessel uses welding cable. While welding cable is an excellent current carrying conductor, it is expressly prohibited by A.B.Y.C. recommendations and has deficiencies which reduce its suitability for use aboard a vessel. Either replace the welding cable or carefully monitor and replace as needed.

1. Address the crystalline deposits on an end cap on the generator.
2. Service and prove the guest and crew cabin landing lights functional; they are intermittently functional.
3. The electrical system aboard the vessel will prove inconvenient when components require replacement in America.