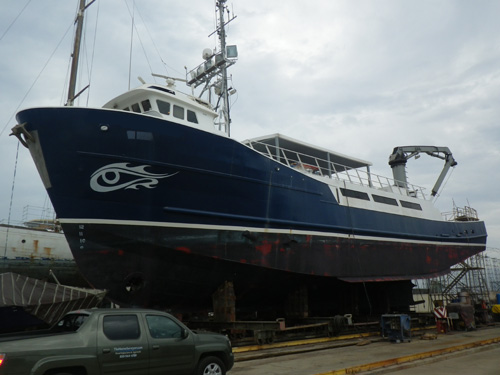 This inspection was performed upon the request of the client listed above on August 14th 2012 and September 3rd 2012 while the vessel was hauled at Gran Peninsula Shipyard, Ensenada, Mexico.

Layout/interior components: Portuguese bridge and pilothouse is located forward on top deck. The pilothouse interior has main control station to starboard with helm located on centerline. The navigation area is starboard aft side with observation bench to port. Stairway on centerline leading aft to captains quarters with head.

Main deck: Interior has bow / forward storage locker, next aft is crew’s dining area to starboard and galley to starboard aft. Port side of crew dining is small crew stateroom forward, head and shower aft, and another crew stateroom aft of head. Centerline, inboard is engine room access with ladder down to engine room. Exterior of forward enclosed space is port side walk-in refrigerator, starboard stairway leading up to top deck and second starboard stairway (just aft) leading down to guest lounge. Passageway on centerline between six staterooms (three per side), each with dedicated head and shower. Aft deck has spa to starboard forward, day head to port forward and deck hatch (for loading stores) to port aft. Below deck hatch is laundry area on lower deck and aft on main deck level is personal watercraft chock on centerline, water tank access hatches to port and starboard aft and hatch leading to steering locker. Transom doors on both sides with joining platform.

Comments: The vessel was inspected while hauled. The hull bottom was visually inspected. The hull bottom is in good structural condition. This survey did not include an ultrasonic inspection for plate thickness. We inspected the hull bottom on August 14th 2012, prior to the bottom paint being applied and on September 3rd 2012 after bottom paint had been applied. Exposed metal that was seen at the time of the initial inspection had been coated prior to the second inspection. There are a few doublers on the hull bottom, the largest is on the starboard side forward of amidships. There are a few dents, with the most significant dent approximately 5’ forward of the starboard sea chest. The aft two sea chests to starboard forward are blocked off. A welded on zinc anode in the thruster tube is approaching the end of its service life. The hull sides and transom were visually inspected. The hull sides and transom are in good structural and satisfactory cosmetic condition. The deck and superstructure were visually inspected. The deck and superstructure are in good structural and satisfactory cosmetic condition. The faux wood planking is failing in some areas and there have been planks replaced. There is localized surface corrosion on the pilothouse superstructure and doors. The deck hardware including safety rails, mooring devices and hatches was visually inspected and most hatches were opened and closed. Overall the deck hardware is in good condition. The structural reinforcements including the longitudinals, frames and bulkheads were visually inspected. The structural reinforcements appear to be in “as-built” condition. The bilge is holding minimal water in the engine room. The interior cabin spaces are neat, clean and orderly. The interior of the vessel is in satisfactory – good cosmetic condition. The passenger cabins are not currently in a “finished” state. They have minor projects underway. There is no handrail on the steps leading to the theatre room. This survey is not a mould inspection.

Comments: The engine and transmission were visually inspected. This survey is not a mechanical survey. Please consult with a qualified mechanic for greater detail as to the condition of the machine systems. The external surfaces of the engine and transmission appear satisfactory – good. The engine is equipped with individual cylinder pyrometers and many of the wires are disconnected. As the vessel was inspected while hauled, none of the machine systems were tested. The engine controls were not tested. The exhaust system is properly arranged and installed. The propulsion components were visually inspected and appear good. The propeller was just sent out for service; it was not installed during the first inspection and was installed prior to the second inspection. The steering system was visually inspected. The steering system was not tested. The engine room blowers were energized. The generators were visually inspected only. Overall the generators are in good condition. The aft generator appears new; it has not been electrically connected. The aft generator’s exhaust system is “dry” does not have a thermal blanket. The through hulls were visually inspected and we manipulated a few of the valves. The through hulls are in satisfactory condition. There are rust stains on the sea chest below the main engine’s sea strainer. Several of the covers are removed from seawater components aft in the engine room bilge. The seawater systems were visually inspected; none of the components were tested. Overall, the seawater systems are in satisfactory condition. There are salt crystals on the bottom of a sea strainer near the ballast pump, to port in the engine room. There is rust on the ballast pump. The electric bilge pumps were visually inspected, the pumps and the system was not tested.

Comments: The fuel system including the tanks, fills, vent, feed and return lines, was visually inspected as installed. Where visible the fuel system components are in satisfactory condition. The condition and age of the fuel (and water) and the integrity of the tanks (fuel, water and holding) is beyond the scope of this survey. Please consider filling all tanks for a simple, practical test of their integrity. The water pressure system was not tested. Accuracy of tank level gauges is beyond the scope of this survey. The starboard aft wing water tanks were being cleaned and painted at the time of the survey. Capacity information above was obtained from a diagram on the fuel manifold, to port in the engine room.

Comments: The electrical system including the shore power cord, batteries, wiring, circuitry components and circuit protection equipment was visually inspected and a few components were tested. Overall the electrical system is in satisfactory condition. The condition of the batteries is beyond the scope of this inspection. There is an uncovered light fixture forward in the engine room. The cover is removed from the main distribution panel; the shore power cord is temporarily hardwired onto the shore power circuit breaker. The battery cables used for the generators’ batteries feel like welding cable; there were no visible markings. Wire nuts are used at many wire connections. Wire nut connections are exposed at a motor controller near the steering fluid tank to starboard in the engine room. There is an unused battery to starboard aft in the engine room, it is likely designated for use with the starboard aft generator, but it is not yet installed. Wiring about the pilothouse is disorganized. A computer forward in the pilothouse is partially disassembled. There is a loose air conditioner unit on the upper deck. The galley air conditioner is dripping water (condensate) into a bucket. The air conditioning units in lockers in the galley and the gym are exposed and apparently are being serviced. Wires are hanging down from the guest cabins; these appear to be serving air conditioning devices which are removed. We did not see a shore power inlet.

Comments: Safety equipment for fire fighting protection appears satisfactory however the extinguishers have not been inspected, tagged and maintained per N.F.P.A. recommendations. Personal flotation devices appear suitable for offshore use. Current distress signal flares are not aboard. A suitable sound signaling device is aboard. The navigational and anchor lights are properly arranged and installed. They were not tested. The ground tackle including the anchor and rode was visually inspected as installed and appears satisfactory. The entire length of the anchor rode was not inspected and should be inspected prior to use. There is no secondary anchor aboard. The alarm panel was not tested. The life rafts do not have current certification. The EPIRB battery is expired. The class A EPIRB is aboard. Smoke alarms throughout the vessel are loose and the batteries are detached. The age of the smoke alarms is unknown. A portable fire extinguisher in the entryway to the engine room would not come out of its bracket.

Tanks: Several tanks in and near primary locker to starboard aft of pilothouse, loose tank aft at BBQ grill

Comments: The LP gas system including the tanks, tank locker devices and galley range was visually inspected. The system and components were not tested. Overall, the installation of the LP system is satisfactory. We did not see an electric solenoid valve. The vessel is not equipped with propane or carbon monoxide alarms. There are loose tanks, including a tank loose near the propane locker forward and a tank loose near the grill aft. There are loose tanks in the tank locker. The tank locker appears to be vented onto the upper deck.

The vessel is a passenger carrying vessel converted from a Bering Sea crab fishing vessel. More detailed survey reports are available aboard and they were briefed. They detail the conversion history including the most recent conversion in 2005. A stability booklet is also aboard which was performed in 2005/2006. The vessel has a steel hull, aluminum superstructure, one main engine and three generators. The starboard aft generator is new and its installation is incomplete. The vessel has been hauled at its current location for two years. The vessel is basically structurally sound. Upon completion of the maintenance which is underway, recommendations and successful sea trials, the vessel should be suitable for its intended purpose as a blue water expedition yacht.