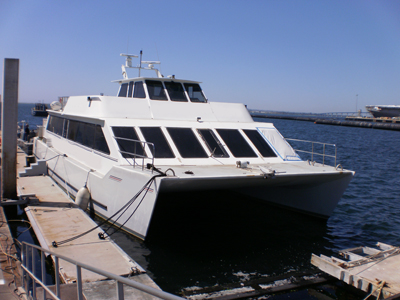 The vessel was inspected while afloat. Hull construction material is composite fiberglass. A prior report the laminate is foam cored with infused epoxy resin. Deck is constructed of composite fiberglass and above deck structures are constructed of composite fiberglass. Coring is unknown. Bulkheads are constructed of composite fiberglass. Overall condition of the hull structure appears satisfactory. The vessel’s weight is unknown. Exterior rails and hardware appear good. Cosmetic condition of vessel appears satisfactory externally and marginal internally. Vessel’s external colors are white with blue stripes and blue and red lettering. Below waterline through hull fittings appear satisfactory. The vessel is equipped with a port and starboard engine driven bilge pump with manifold and four electric/automatic bilge pumps that appear satisfactory and the bilge is holding water to port amidships. The ventilation system consists of forced air blowers and natural ventilation and appears satisfactory. General housekeeping appears marginal. The condition of the coring, in the stringers, deck, and elsewhere as applicable, is beyond the scope of this inspection.

There is 300 gallon fuel capacity (per prior report) in two metal tanks located amidships in each hull. Fuel tank surfaces, where visible, appear satisfactory and the securing mechanism appears good. The fuel fill, vent, feed and return lines and components appear satisfactory.

The vessel is a composite fiberglass passenger carrying catamaran. The certificate of inspection was seen, it allows a 149 passengers on lakes, bays and sounds and limited coast wise including to Catalina Island. The C.O.I. expires on November 6th 2012. The vessel was built in Tacoma, Washington and is equipped with two diesel engines and two diesel generators. The vessel is propelled with Hamilton jet drives and has foils visible between the hulls aft. The vessel is currently undergoing maintenance and repairs. The vessel appears basically structurally sound. The reported average speed of the vessel is 25 knots.

1. Reinstall the missing window to port forward on the main deck.
2. Repair the cracks in the superstructure aft of the starboard side windows. Some repairs (grinding) have apparently begun.
3. Reinstall all seats which are currently disconnected and assure they are properly secure.
4. Remove wing nuts used on three of four flybridge battery terminals and replace the wing nuts with lock washers and steel nuts.
5. The port wing station engine controls have been removed, reinstall these controls as necessary.
6. Service the MOB light on the flybridge, connected to the life ring. The light is dim.
7. Complete work underway on the aft deck including recoating the deck where coatings are removed, patching the hole in the center of the deck which is currently covered with plywood.
8. There was a soft area underfoot to port on the aft deck, determine the significance and extent of this condition and repair appropriately.
9. The starboard engine’s raw water supply hose has a junction and the junction is resting on top of a pump. The port engine’s raw water supply hose also has a junction. We strongly encourage utilizing a single hose from the through hull to the water pump for each engine and properly securing the hoses to prevent damage.
10. Reinstall the lids for the battery boxes.
11. There is water on the outboard battery to starboard aft, this is likely a leak from the exhaust hose to tube connection above it. Service to eliminate the leak, repair any damage, clean stains and water to allow detection of any future leaks.
12. Properly secure the bilge pumps aft in both hulls.
13. There is standing water in the port hull amidships, determine the source of the water, eliminate the source of the water and remove the water to allow detection of any future leaks.

1. There is broken glass in a white control box inboard of the starboard engine, replace the broken glass and remove the broken pieces.
2. The port generator had no visible identification tag.

This survey sets forth the condition of the vessel and components, as specifically stated only, at the time of inspection and represents the surveyor’s honest and unbiased opinion. The submitting of this report should not be construed as a warranty or guaranty of the condition of the vessel, nor does it create any liability on the part of Christian & Company or the individual surveyor. No part of the vessel was disassembled or removed and no assumptions should be made as to the condition of concealed components. Specifics were obtained from sources available at the time of inspection and are believed correct, but are not guaranteed to be accurate. This inspection was performed for insurance and refinancing purposes and should provide the information necessary for underwriting. If any additional information is required, please contact the undersigned. This survey report is not intended for use as a “buyer’s survey.”