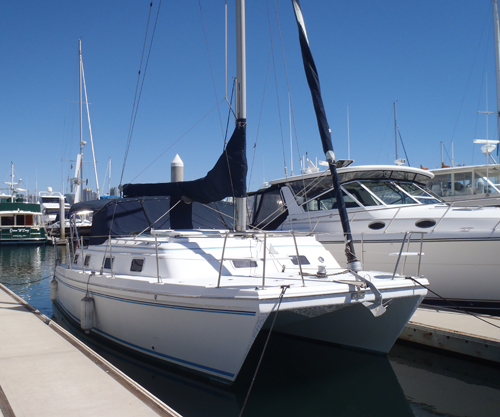 There is 12-gallon capacity in two plastic portable tanks located in the lazarette locker in the cockpit. Fuel tank surfaces, where visible, appear good and the securing mechanism appears satisfactory. The fuel fill, vent, feed and return lines and components appear satisfactory. Fuel shutoff valves are located at tanks and appear satisfactory. A metal fuel tank (75 gallon capacity) was seen below the starboard aft stateroom bed. This tank is longer in use. The fuel feed line from this tank has capped off.

Vessel is equipped with LP gas that fuels the galley range/oven. Tanks aluminum external appearances are satisfactory and they are properly secured. Ventilation appears satisfactory. Tank valves were opened and an odor was not noticed. Feed line is equipped with a reducing regulator and an electric shutoff solenoid and feed lines appear satisfactory. An electric shut off switch is visible inside the interior of the vessel, the actual solenoid was not seen on the tank feed line.
Summary: Satisfactory

The vessel is a production built fiberglass cruising catamaran sailboat equipped with an auxiliary gasoline outboard engine. The vessel was built in 1992 by Endeavour Catamaran. The vessel was inspected while afloat only. The vessel was not sea trialed during this inspection. The outboard engine was not test operated. The sailing systems were not load tested. No statements were taken in regard to any previous events in the vessels history such as collision, grounding, submersion, fire etc. Upon completion of the recommendations the vessel is suitable for its intended use as a near coastal cruising catamaran sailboat.

1. Remove all electrical components (speakers, etc) from lazarette currently used as a portable fuel tank locker, so as to prevent any ignition source for the gasoline fuel stowed in this location.
2. The fire extinguishers seen have not been inspected and tagged in the past 12 months as recommended by the N.F.P.A. Provide currently inspected and tagged fire fighting equipment as recommended by N.F.P.A. and required by federal regulations.
3. Visual distress flares were not seen aboard. Provide current visual distress signal flares as required by federal regulations.
4. The mast mounted steaming light did not function. Prove all navigation lights functional.
5. Provide a throwable PFD as required by federal regulations.
6. An electric shut off solenoid was not visible at the tank. Provide an electric shut off solenoid if one is not currently installed.

1. Two small cracks are visible on the outboard starboard and port side of the engine mount assembly. Monitor and service if/as needed.
2. Consider the installation of a LPG pressure gauge and a LPG alarm/detector. Batteries were not accessed.
3. Rudder ports were not accessed.
4. The vessel is equipped with a 75-gallon metal fuel tank. It appears that this tank is no longer used. Remove/service the unused fuel tank as needed.
5. The hull bottom exhibits paint failure and moderate marine growth. Service the hull bottom as needed/necessary.

This inspection was performed for the expressed purpose of obtaining insurance, and should provide the information necessary for underwriting purposes, if any additional information is required, please contact the undersigned. This survey report is not intended for use as a “buyer’s survey”.