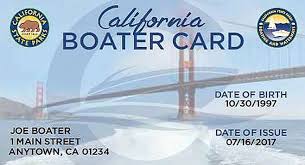 On January 1, 2018 a law requiring California boaters to have a valid California Vessel Operator Card (CVOC) takes effect.  Initially only boaters 20 years old and younger will need the card.  Each year the age limit is graduated by five years and every boater will need a card by January 1, 2025.

Currently, California Harbors and Navigation Code Section 658.5, states that nobody under 16 years of age may operate a boat with a motor of more than 15 horsepower, except for a sailboat that does not exceed 30 feet in length or a dinghy used directly between a moored boat and the shore (or between two moored boats). The law allows children 12-15 years of age to operate boats with a motor of more than 15 horsepower or sailboats over 30 feet if supervised on board by an adult at least 18 years of age.

There are several companies offering online education for the CVOC.  The law mandates that the education must be approved by the National Association of State Boating Law Administrators (NASBLA (not NAMBLA:>)) and by the California Department of Boating and Waterways.

If an approved course was taken after January 2015 you can use copy of that course certificate and submit it online at http://californiaboatercard.com/applynow/.  Temporary cards will be issued immediately (for both courses previously taken and newly taken course) and actual cards will be issued starting mid-January, 2018.

The first infraction of the law is subject to a fine of not more than $100.00.

I have always supported volunteers who educate boaters, such as the Coast Guard Auxiliary and Power Squadrons.  I believe the individuals who voluntarily attend these classes are more likely to succeed in becoming safe boaters, because they want to become safe boaters.  The mandatory boating education courses appear to be much like the safe driving courses that are a mandated option when one receives a speeding ticket.  It is doubtful that one stops speeding after taking such a course, though we often slow down as we gain wisdom through experience and age.

There are statistics that say states with mandatory education have fewer boating accidents and fatalities, and the low percentage of those involved in the accidents and fatalities that have a boater’s card also support the concept of boater’s education.  This process seems to be a minor imposition on boaters, likely very easy for experienced boaters and hopefully a worth benefit to new boaters and the boating community.