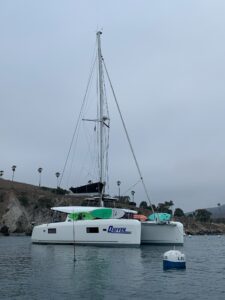 My family and I regularly charter Catamarans in various locations.  The most recent charter was planned for Croatia, but COVID redirected us to Catalina.  While not as exotic of a location for Southern California locals, it remains a lovely destination.  This article touches on the practice of mooring and one particularly humorous mooring event.

As most local boaters know, Catalina utilizes a two point mooring system.  Normal process is to grab the mooring wand from the bow, pull the line from the wand up to the mooring line, secure the mooring line loop to a bow cleat and then run down a separate line (the sand line) astern until the stern mooring line is reached and attached it to a stern cleat.  With only minimal boat handling skills, basic crew instruction, a sprinkle of patience and a dash of good luck, voila the vessel is moored.

Between day sails, trips to the water dock, mooring moves (which happened thrice in Avalon) and stays in both Catalina Harbor and Isthmus Cove, we likely moored twenty times.  We missed twice.  The first attempt began with apparent success, we grabbed the mooring line with the vessel barely moving and virtually no wind or current to deal with.  Unfortunately, the captain (and writer) failed to communicate well with the crew as to how they could provide instructions to fine tune our position when the initial attempt to secure the bow mooring line was unsuccessful.  No biggie, the second attempt was successful.

A much more challenging and eventful attempt occurred when returning from a day sail in the late afternoon.  20+ knot winds were the most significant factor as we approached the mooring from upwind.  We passed the mooring, spun the 42’ Catamaran successfully into the wind and put the port bow at the wand.  The crew was able to grab the wand but failed to secure the mooring line.

As minor adjustments failed to bring the vessel back to its necessary position, “head into the wind” was offered by what appeared to be the captain of the adjacent vessel, moving his hands as if guiding an airplane to a gate.  My initial thought was, “no shit” but I chose to respond with a verbal “thank you” and a head bob, communicating in the howling wind from 20 yards.  He was right, after spinning into the wind and missing, I was trying to walk the boat sideways back into position and the wind made it challenging.

During the next few moments, several other pieces of advice were provided, though none were requested, they were all suitable and clearly came from a knowledgeable captain.  Based on what appeared to be the owners, captain, and crew on their starboard rail, this was a regular and entertaining event for them, think boat launch ramp and “Qualified Captain” (Google it if you haven’t watched).

I had assigned one crew to grab the wand, the largest crew person to grab the mooring line and attach it to the cleat and a third crew to stand by with a loose fender, just in case.

The fender operator, a novice sailor, took the job seriously.  However, in an earnest attempt to place the fender between our vessel and the adjacent vessel, well in advance of any contact, they obstructed the more important work of mooring.  To them the adjacent captain said “You should get out the way, we have fenders if needed”.  Again, he was right and verbalized the idea prior to me.  I confirmed that the fender holder should stand down for the time being.

The mooring line had just been secured on the bow when the captain instructed us to “back down, hard”.  Another brilliant idea I thought and though we were successfully backing down (as hard as our two 30 horsepower engines would allow) the crew was not successful in the stern mooring.  The boat was too small to reach the stern mooring line (42’ boat on a 70’ mooring) and the concept of securing the sand line as tightly as possible had not been explained properly to the crew.  Even with the adjacent captain’s sage advice, our crew was ill prepared by their captain for this unforeseen event.  They struggled mightily but alas could not reach the stern mooring line.

No problem, my first mate and wife of nearly thirty years could handle the helm at this point and I was able to manage the stern mooring attachment.  We were fairly tight on the sand line and happy to have completed a more difficult mooring and one final suggestion was offered, “Call the harbor patrol and have them pull you back to tighten up your mooring.”  Crap, I thought, I had instantly shifted to margarita mode.

All of his unsolicited advice had been good, mostly unheeded, but no bad advice.  Out of an abundance of caution, I hailed the next passing harbor patrolman who took a quick look and advised that we were well moored and should take up any remaining slack in the sand line when the wind subsided.  I smiled inside as I poured the Grand Marnier floater on top of my marg.

An hour or so later, the wind subsided.  I explained to the crew that we were going to reverse hard and take up all possible slack on the sand line, tightening up the mooring as much as possible.  No one was on the deck of the neighboring vessel.  As I begin to reverse and back down, one final bit of advice emanated from an open porthole, “PULL HARD.”  I laughed inside and later joked with the crew, you had one job, pull hard, and apparently you weren’t doing so or you wouldn’t have received such sage advice.  I was extremely proud of my crew, even after I noticed that every bit of the sand line they retrieved had somehow been stored on the stern cleat, in a giant ball of confusion. 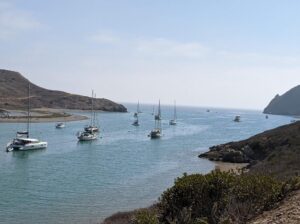