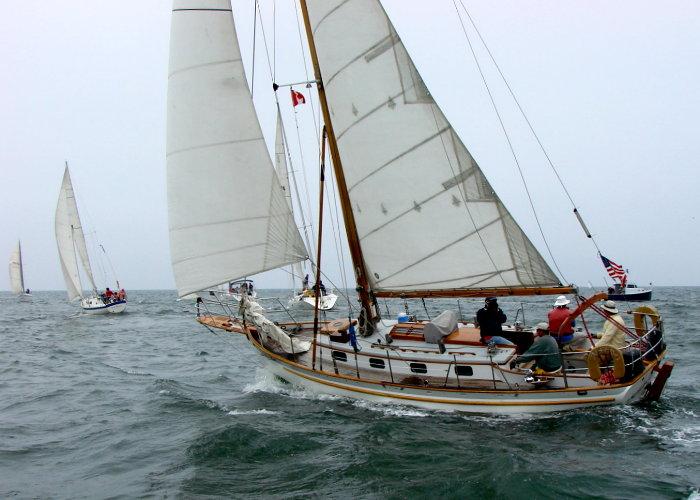 I first met Mr. Cecil Lange in La Paz, Mexico while surveying a Cape George sailboat he built in Port Townsend, Washington.  The Cape George boats he built were very traditional, stout and full of wood.  It was both a pleasure to meet the builder and helpful to have such a knowledgeable person to answer questions.
A few years later I was handling an insurance claim involving a C & C sailboat grounded in Bahia Santa Maria, just north of the entrance to Bahia Magdalena (Mag Bay).  Honeymooners had run aground, I never asked what had distracted them.  My initial response to the adjuster was to total the boat, but he said it had gone aground in soft sand, remained upright and had a military guard to prevent looting.  At his request, I was off on another adventure and this time I would be a pseudo “salvage master”.
I flew in to La Paz and got on the cruiser’s net on the VHF to gather local knowledge, several boaters were interested in the operation but few had any useful skills or knowledge, until Cecil responded.  In an hour I picked him up, he had a small bag; I think he brought a couple pair of clean underwear. He jumped in the Jeep and we were off.
He and I searched out and purchased all the suitable line in Mag Bay, luckily found and hired a Chinese/Mexican shrimp boat captain and engaged in a difficult negotiation with the leader of a small fleet of pangas (the common Mexican runabout).  We constructed an elaborate web of lines to help pull the boat “gently” off the beach and devised a way to get the tow line to the shrimp boat, we planned to pull at the next high tide.  We overcame many difficulties typical of salvage operations, difficult access (long panga rides and long hikes over dunes), salvage logistics and extremely limited resources.
Finally we were ready for the pull and Cecil was aboard with a couple locals from the panga crews. I was directing from the beach, like Mutual of Omaha’s Marlin Perkins would watch for trouble while Jim wrestled the wild anaconda, except the age thing was reversed (Cecil being my senior by some 30 years).
After some initial success and pulling the C & C into the surf line, the web failed.  In short order Cecil tied the towing line around the mast and the tow resumed.  When the boat made it out past the surf line I was temporarily at ease and was amazed by Cecil (at the time in his 70’s) riding the bucking sailboat joyfully through the surfline.
A panga took me out to the C & C only to discover the boat was taking on a significant amount of water, the battery level was low and the engine’s water pump was not pumping water (the impeller was shot).  We decided to change the impeller as darkness fell.  We wanted to conserve the little battery power we had to start the engine, so we used an oil lamp for light to change the impeller while taking turns on the manual bilge pump.  Surveyor’s note – sometimes these seldom used old school boating basic tools are invaluable.  Once we changed the impeller, the engine ran fine, the alternator gave us electricity, the electric bilge pump worked and the shrimp boat towed us in to Mag Bay.
Cecil was an invaluable asset to the salvage and his ride through the breakers is a memory that will hopefully stay with me forever.  He reminded me of Slim Pickens riding the bomb out of the plane in the film Dr. Strangelove (watch here).
The struggles we overcame and success enhance the memory, but the adventurous, Kiwi, boat building marine surveyor Cecil Lange’s involvement was by far the best part.
Christian & Co.
1276 Scott Street
San Diego, CA 92106
Toll Free: 800-944-4789
Phone: 619-223-7380
Send us an email