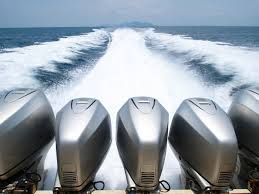 This is a frequent question from potential boat buyers. Most mechanics and marine surveyors answer with some version of… “well, it all depends”. For this article I tried something different – research.

Virtually every mechanic I spoke to and online article I read supported my standard response. Boat engines don’t wear out, they fail because an engine component is neglected and eventually causes more significant (and expensive) damage. However there were interesting responses and research results.

The web sites BoatSafe.com and DiscoverBoating.com state that an average gasoline boat engine will run for 1,500 hours and the average diesel will last 5,000 hours before requiring a major overhaul, and a well maintained diesel may last 8,000 hours.

Randy Hynd, of Sunset Marine, a San Diego dealer for several popular gasoline marine engines said in his thirty years in the business he has seen two outboard engines wear out, and they had over 6,000 hours. He is aware of government vessels with over 4,000 operating hours on gasoline inboard/outdrive engines, and they “hardly ever wear out”.

Yanmar dealer PacWest Marine (San Diego) and distributor Boatswain’s Locker (Costa Mesa) mentioned 10,000 operating hours as a target for Yanmar engines and they report knowledge of a Japanese government boat with over 40,000 hours on its Yanmar engine.

Craig Stange, a San Diego based Detroit Diesel engine specialist said he has seen a 71 series engine run for 7,000 hours before ring and cylinder liner wear lead to excessive blow-by. He noted that two stroke engines (like the old 71 series) wear out faster than four stroke engines and he uses 5,000 hours as an average life expectancy. He stressed that more horsepower results in less engine life.

More horsepower from the same engine block will reduce the life expectancy. For instance, the Caterpillar 3208, a popular boat engine (of yesterday) is rated at 210 h.p. Add turbo charging and after cooling and, voila 435 h.p.   More than double the horsepower but with a significant decrease in life expectancy. A competition pulling tractor named Silver Bullet has a nitro burning, blown Cat 3208 producing an estimated 3,000 to 5,000 horsepower; no life expectancy information was available. And we think our boat engines have it rough!

Boat engines can last significantly longer than the common assumptions of 1,500 to 2,000 for gas and 5,000 for diesel if they get proper maintenance and usage. To get the most life out of your boat engine run it regularly. Explain to your husband or wife that the marine surveyor said you had to use the boat’s engines or they would break and major repairs are more expensive than the fuel. Pay attention to any hiccups, if it’s harder to start, smokes more, gets hotter or has any changes, address them prudently. Establish and maintain a suitable service protocol and don’t burn nitro.