The caller identified herself and asked if I would be interested in appraising a one man submarine. Initially, I declined, as this is outside of my area of expertise. She then said she was with the reality television show “Pawn Stars” and could I help her locate an expert. 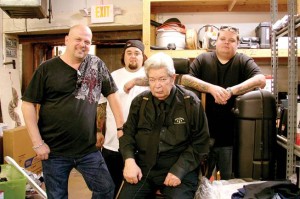 I told my kids about the call and they quickly became excited. They knew the show. I could not find a submarine expert, and with my kids’ encouragement, I called back to the production company and told them I would accept the assignment. As valuations of unusual vessels are not unusual, I was confident I could do the job but I insisted that I could not comment on the safety or function of the submarine. They engaged my services and explained the rules of reality television, i.e. no pay!

I told the kids I had been hired, but “hiring” in this case, did not include any pay. I was extremely pleased with my children’s universal rejecting the idea of working for free. However, their excitement had become contagious and I had caught the reality television bug. This reality television show, with which I had little exposure, had peaked my curiosity and I was scheduled to appear.

The show is based on a pawn shop in Las Vegas. It is run by three generations of men and they are the “stars”, along with a comic foil nick named Chumlee. The show has a very large following as it utilizes interesting historical facts and hires various experts to explain and value a myriad of items that are being pawned.

My mother was traveling from Florida to Las Vegas where the show is filmed, and we scheduled the shoot to coincide with that trip. My 10 year old daughter and I arrived at the World Famous Gold & Silver Pawn Shop bright and early. The production company had provided scant details about the submarine, most of which proved erroneous. I prepared as well as possible, inspected the submarine and was ready to shoot. It started raining. The shoot was delayed.

After inspecting the submarine I was able to obtain valid information and perform a real appraisal. The shoot was rescheduled and completed.

The premier of the show was on Monday, April 11th 2011. The episode involving the submarine is entitled “Sub For Sale” and can be seen on the History Channel’s web site, reruns on the history channel, syndicated on other channels or pay per view.

One of the themes of Pawn Stars is “you never know what’s going to walk through that door” and the same holds true at Christian & Company Marine Surveyors.