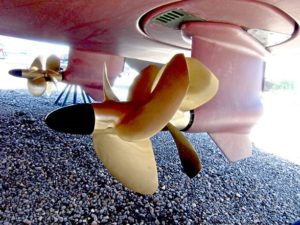 Autopilots have been around forever, but autonomous vessel operation is currently being developed using technological advancements, and some of the same systems used for self driving cars.  Self driving boats are much easier most of the time; the ocean is big and has less traffic.

I recently drove a car with some autonomous features and while it added a component of safety, like mandating a safe distance between my car and the next car forward, I also noticed how easy it was to rely on that feature and let my guard down.

There are large scale self driving projects underway.  Japan, Norway and Holland have autonomous vessel testing underway.  The recent series of ship vs. ship accidents have been mostly attributed to human errors and many feel the outdated control technology can be improved upon.  There is a company selling sailing drones for ocean research (saildrone.com).  These vessels are controlled from remote control rooms and by computer programs (think Olympic drones.)

On several occasions the undersigned has surveyed a multihull sailboat that was converted to a fixed wing sailing drone for the military and later sold to the private sector.  One of our jobs arose from this high powered vessel damaging its dock when the computers were removed for service and a large wind created extreme forces and ripped the dock loose.  Usually the computers would orient the fixed wing sails to prevent such a problem.

In the recreational vessel realm, there are pod drives and conventionally powered vessels with “drive by wire” controls.  For those unfamiliar with pods, both Volvo and Cummins offer drive systems that don’t include a rudder and all controls are electronic, no mechanical linkage and no hydraulics.  The pods are transmissions protruding from the bottom of the boat which spin and thrust independently at the direction of the computer.  The operator simply tells the boat where to go with either a joystick or “faux” conventional controls (steering wheel and levers) and the drive system computer decides what the pods need to do to make the boat go there.

We can all parallel park one of these boats.

This same control concept is in use on other drive systems, including inboard and outboard engines.  The evolution of electronic control systems facilitates automation.  I have spun boats in circles while moving in a straight line down the bay.  There are dynamic positioning systems that can keep the boat in one location without an anchor.  A now common test during seatrials is to push a button and watch the boat’s computer control the propulsion gear to counter the wind and current; the boat remains in one location and orientation.

And our claim files are full of problems with electronic controls, though far less now than in the early days of these systems.  Still, we must keep a look out and be ready to take action to avoid a collision and not let our guard down.