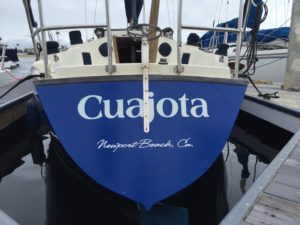 Naming a vessel can be a difficult decision, often reflecting a family member’s name or referencing the business of the owner in some clever way.  Less thought is put into the hailing port, but the hailing port is a choice.  It does not have to be the place where the boat is stored, where you live nor does it have to have any actual significance or relevance to your life.  What do you think are the parameters for choosing a valid hailing port?

Throughout my career it had been my understanding that the hailing port had to be an actual city in the United States or a US territory.  Some had told me that a hailing port had to have a post office, but I had never researched the actual rule, and I wondered what made a location a “city”?

My thanks (and a belated Happy Birthday) to Bernadine Trusso of Dona Jenkins Maritime Document Service, Inc.  Bernadine discussed this issue with an officer in the Coast Guard and they confirmed that the website used by documentation personnel is https://geonames.usgs.gov/apex/f?p=138:1:0:::::

The name and the hailing port must be displayed externally on the vessel, either on both sides of the hull or on the transom.  The hailing port must include the place and a state, territory, or possession of the United States.  The state may be abbreviated.

Registered boats may have names and hailing ports, but these boat names are decoration, an expression of individuality, and can be changed at any time as they are not legally significant.  Based on my newly found resources, Huntington Harbor and Mission Bay are in fact valid hailing ports, but not Surf City and now you have the ability to be as creative with your hailing port as with your vessel’s name.