In my professional life as a marine surveyor and my personal life, including actively chartering catamarans in foreign countries, I regularly combine boating and travel.  “It’s not how you get into trouble”, I often tell my clients, “it’s how you get out that matters.”  Usually this sentiment applies to sea scenarios, but recently I was able to practice this technique on land.

I flew to the airport in San Jose del Cabo, Mexico on a Monday, for a new boat “warranty” inspection, also in San Jose del Cabo.  My intention was to complete the job that day and spend the night in Cabo San Lucas, enjoying the following day in the warm winter weather, before a late afternoon departure.  Upon arrival to the marina, I took a second job and my schedule changed, but I had already purchased a Cabo San Lucas hotel room for the night.

Maybe it was because I was in the least expensive hotel on the marina, maybe it was because the lights didn’t work in the hotel’s stairway, but for some reason I decided to store my passport in the room safe before leaving for dinner.  This is not a habit, I only do it occasionally and I briefly considered the consequences as I shut the safe door.

I was up early the next morning working on my laptop, not realizing that its clock did not adjust to the time difference.  When I realized that I would be late to the job, I packed quickly and rushed out of the hotel, still hoping to return for a few hours of relaxation.  The jobs took longer than expected and I decided not to make the 30-ish minute drive back to the hotel and instead arrived two hours early for my flight back to San Diego.  I entered the airport relaxed and told the rental car shuttle driver how good it felt to be early and stress free, then I reached into the passport pocket in my brief case.  Something slightly less than total panic but much more than worry quickly displaced the “I got plenty of time feeling”, as I remember the passport was in the safe.  One of my children was having a medical procedure early the next day and I was determined to get home.

Instantly I started considering my options, would my Sentri pass work, could I get my rental car back (and drive like “that guy”), how long would it take to get to my hotel and back?  I knew I had to make decisions quickly as the clock was running.  I told myself to stay calm, “you got this”.

There are two ways from the airport to Cabo San Lucas, a toll road and a free road with much more traffic.  I called the hotel and began the painfully long wait for them to locate the passport.  Mañana time is great for vacation, but does not go well with plane schedules.  I began negotiating with taxi drivers, it is hard to break old habits and I pride myself on this skill, but trying to negotiate in this situation proved futile.  My timing demand overpowered my ability to walk away casually (the show them your back gambit) and wait for the driver with the desire to match my needs.  I hired a taxi at full retail price.

Luckily I was able to charge my almost dead phone in the taxi as we headed towards the hotel on the toll road; I was still on hold with the hotel.  The toll road is mostly a two lane road with occasional passing lanes and has slow trucks, the elderly taxi driver, with good English skills, looked for opportunities to pass, but few came and he expressed his impatience in Spanish.  It became a comedy movie scene.  I tried to get the taxi driver to call the hotel, against his better judgment he tried, we almost wrecked.  One thing about driving and talking on the phone is you get better with practice.  He asked me to call the hotel for him, he had a Samsung phone, and again we almost wrecked while he brought up the dial screen for me.

Those of you who travel to Mexico regularly are familiar with the different phone numbers used for dialing mobile phones versus land lines or from foreign phones.  I travel there often and am aware of the differences, but don’t know them well enough to dial efficiently.  I have to fumble around with a “+1”, “01” or an area code and sometimes, miraculously, after many “that won’t work messages” in Spanish, I connect.  In this taxi I experienced all these problems.  “Keep cool”, I thought.  After twenty minutes I hung up on the hotel on my phone and called them back.  They had found my passport and given it to another taxi driver to head towards the airport.  Then cellular reception failed and briefly I thought I might.

I called the hotel again, while my driver continued toward the hotel, passing the exit to San Jose.  They gave me the passport taxi driver’s phone number, but of course, we were unsuccessful in our initial attempts to reach him from either phone.  Eventually I reached him on my phone but my Spanish was of little help.  I didn’t need “dos cervezas”, “la cuenta” o “el baño”, so I handed my phone to my driver.  I had to stifle myself from micro-managing their conversation, which I barely understood anyway.  We arranged a meeting point at a grocery store, between the two cities, near the exit we had passed a few miles back.  A u-turn on a toll road is possible in Mexico and saved time, a small victory, “I got this”.  We arrived to the meeting point first, the traffic was heavy on the free road, and again some doubt crept into my thoughts.

The passport taxi, blue van number “101”, arrived and I was waiting in the parking lot at the ramp from free the road.  The transfer was made and with some aggressive driving through the roundabout, yeah my driver was “that guy”, we were back on to the toll road in plenty of time to catch the plane.  My ability to check my bag of tools was less certain.  I often travel with tools and knew this might be another time I had to choose between keeping the tools or catching the flight, but this time I had a more urgent desire to fly.  The Mexican TSA could certainly use the hammer but the moisture meter would likely be useless to them.  Would I have to check my scope camera?  I returned to the airport less than 45 minutes before the flight and luckily they were not as rigid as most US airports have been recently. I was allowed to check the bag and was relieved that I had solved this minor self-imposed crisis with moderate stress and less than $200.

Whether it’s a boating challenge, a travel issue or life in general, I find it’s important to stay calm, rapidly assess options, pivot appropriately and believe in a positive outcome.  I had time and access to the airport lounge and chose a Jack and Coke as my reward.  I didn’t have time to drink it or the desire to chug it, so I requested and was pleasantly surprised with the offer of a red Solo to go cup.  The agent inquired as to its content as I passed through the gate and had one final smile when she allowed me to board with “my medicine”. 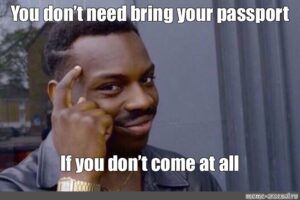