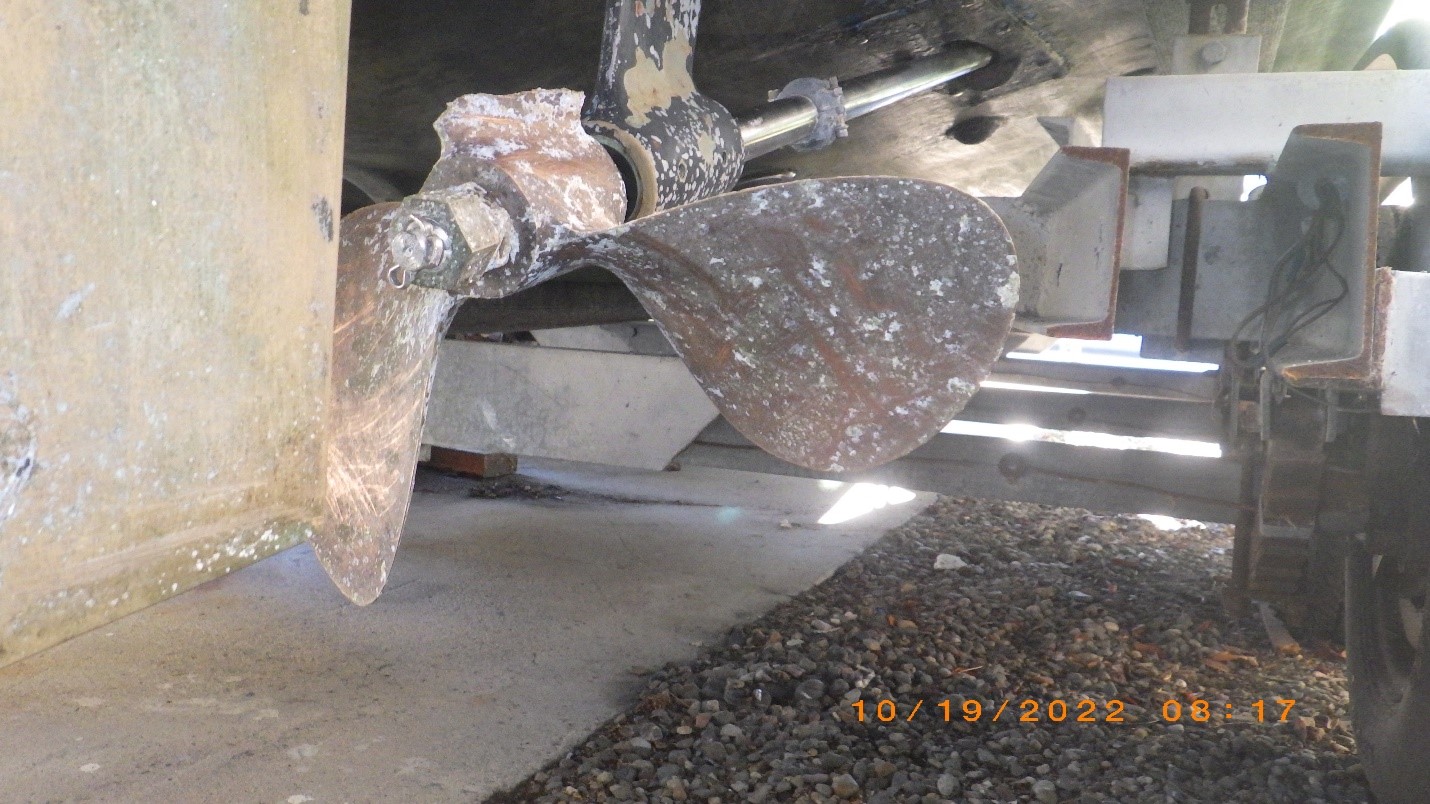 A significant part of our business is assisting with damage claims. Normally we are engaged by an insurance claims adjuster, with the task of determining the cause of loss, defining the scope of damage and assessing the cost to repair. Many times we need to solve a mystery or a puzzle to determine the cause of loss. This recent assignment was from an owner.
We thought it might be fun for you to try to solve one.

The photo above is the propeller at the heart of the puzzle. The owner purchased the vessel ten years ago and had new engines, propeller shafts, and propellers installed within the last two years. Due to performance issues, the propellers were modified after they were installed.

The owner was operating this vessel just offshore the harbor entrance when he felt an “impact” and the starboard engine began vibrating. He inspected the starboard shaft on the interior of the vessel and noticed movement/vibration; he had no idea what had happened. He thought he may have “lost a bearing”. He attempted to get a diver to inspect the vessel but was unsuccessful. He filed an insurance claim based on advice from a mechanic and the vessel was hauled and inspected ten days later. I inspected it two weeks later, when it was hauled on its trailer. The significant findings follow pictorially (with some captions to help). 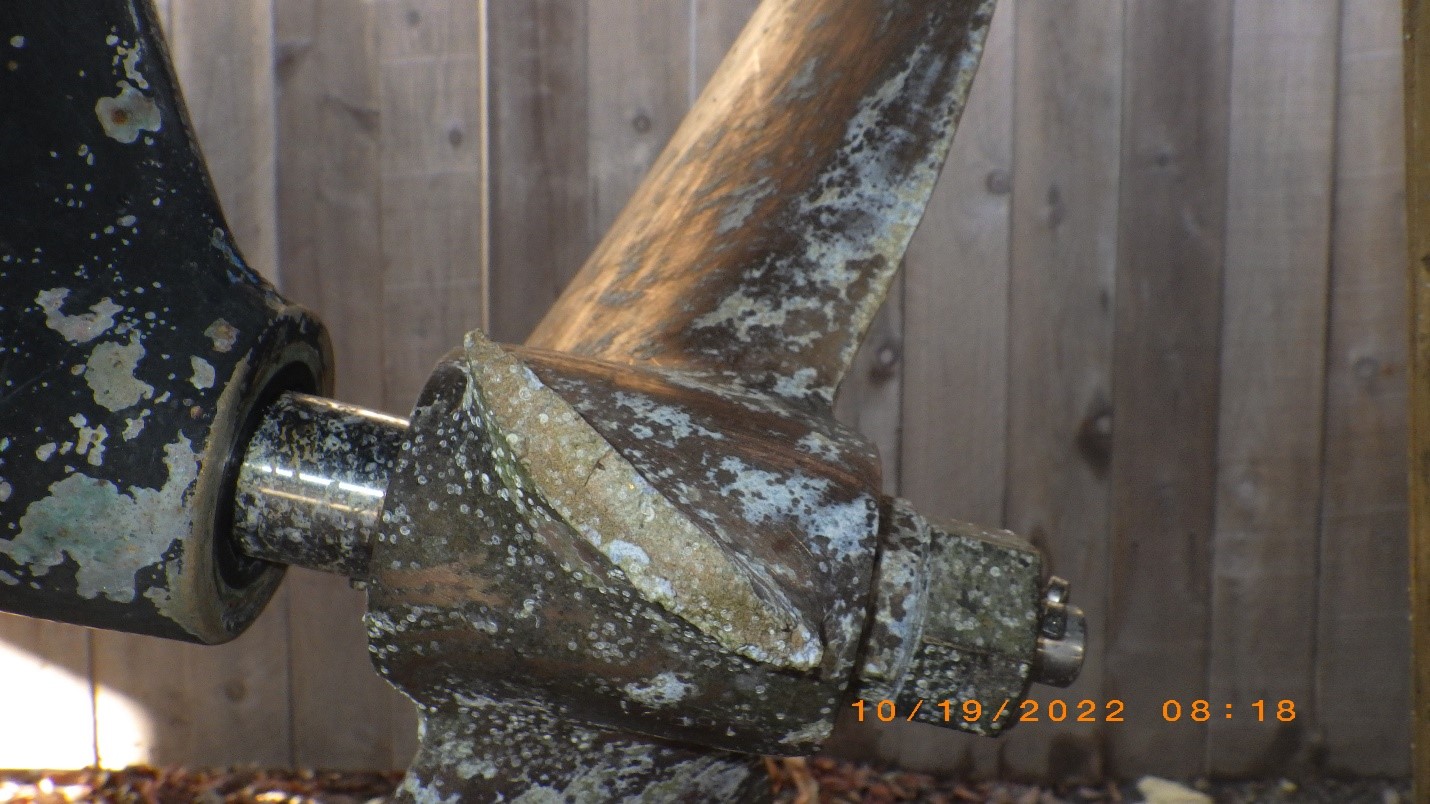 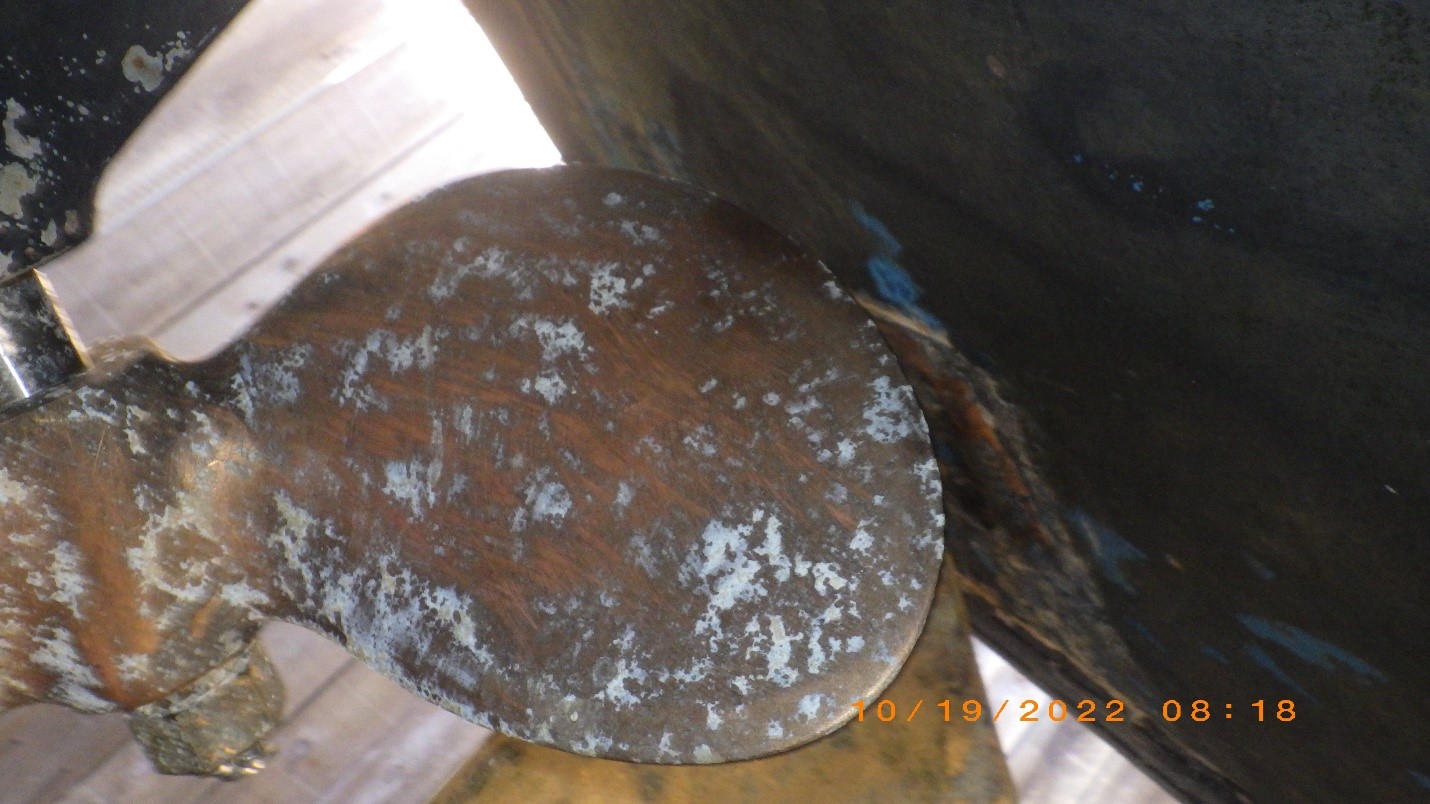 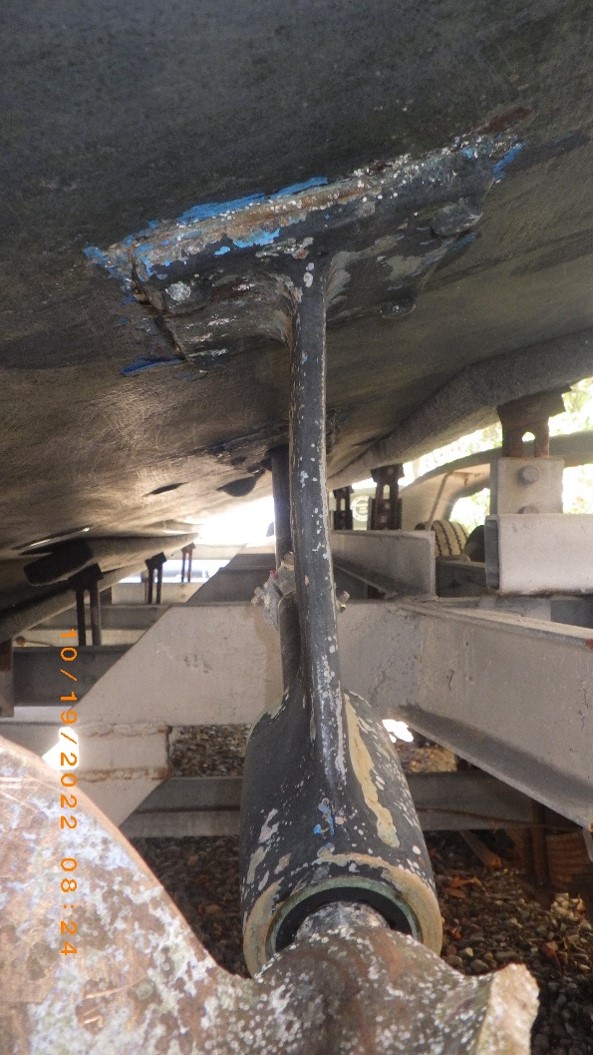 Have you jumped to any conclusions yet?
The propeller is missing one blade, the blade is broken near the hub and the other two blades exhibit no damage. The propeller and shaft spin freely, with the same amount of resistance as the undamaged propeller shaft of this twin engine vessel.
The insurance company denied the claim and the owner called me for a second opinion. Do you know what happened? What testing could be performed?

Don’t continue reading if you have not tried to solve the mystery and don’t want to know the answer yet.
The failure mode of the propeller is unusual and inconsistent with striking a submerged object. A propeller in good condition (in this case less than two years old) should not “lose a blade” due to striking a submerged object. Normally a propeller in motion that strikes a submerged object will contact the object with more than one blade and the edges of the blade(s) will bend or tear. This propeller likely failed due to a crack propagating through the blade or a similar weakness or flaw. The science that could be used in this case would be a metallurgical inspection, perhaps using a scanning electron microscope to determine the mode of failure. Sometimes the science nerds just tell us boat nerds the mode and we have to deduce the real world meaning and cause.
What about the bent strut? This installation includes only the strut for a bearing, a dripless shaft seal, and a hard coupled propeller to a transmission. Remember the propeller shaft spun easily. The strut was installed below a fuel tank before the liner was installed in the vessel and the cockpit covered the fuel tank. It is not an easy task to remove and reinstall the strut.

Here is one more hint.

It is our opinion that the strut was bent prior to the failure of the propeller. The new engine and transmission were installed and aligned to the bent strut and nobody noticed the bent strut.
The aft two motor mount bolts and nuts show the likely uneven alignment, the other engine’s motor mount bolts are adjusted evenly.
It is unclear when, how or why the starboard strut was bent. The vessel is a limited production powerboat and it is possible that the strut was bent during the manufacturing process when it was found to be out of alignment. It is also possible that another event, perhaps a line wrapped around the propeller provided the force to bend the strut, but it is improbable and nearly impossible that striking a submerged object would have broken the propeller and bent the strut.
In addition to the findings above regarding the propeller, an properly aligned propeller shaft, between the transmission and strut, would no longer be aligned if the strut was bent (post alignment) and the shaft would either be bound or extremely difficult to turn. What further testing could be done? If an impact with the propeller had bent the strut, the force would have necessarily been transmitted through the propeller shaft. Pulling the propeller shaft and testing straightness with a dial indicator would show the existence of any bends and a bend at the propeller end of the shaft would prove such a force had been applied.
While neither of the inspections, metallurgical inspection of the propeller’s break surface or dial indication of the propeller shaft have been accomplished, the findings are relatively certain based on logic and experience.

I hope you enjoyed the mystery!