I borrowed the title from the band Phish. Their song by that name begins “Things are falling down on me, heavy things I could not see”. Can you guess where this is going? The heavy thing was a boat and I could not see the risk.

The physician’s assistant at the Torrey Pines Urgent Care said the good news was I had no broken bones; the bad news was I should not play golf the next day to let the heavily bruised arm and shoulder begin to heal. My beloved Friday tee time was cancelled, but I would be fine.

On my way to meet my wife, I tried to squeeze in a pre-purchase survey on a 17’ Com-Pac sailboat, located on Harbor Island (San Diego) on a trailer. To facilitate the inspection, the broker raised the mast and hoisted the sail prior to my arrival. The boat is a gaff rigged cat boat*. At seventeen feet in length, the broker joked that I was really advancing in my career; I quickly responded that there were two detached sail slides and began inspecting the bottom.

I noticed resin had been applied to the bottom of the molded portion of the keel (centerboard trunk), and I crawled under to get a better look. The trailer collapsed with the boat and broker on top, and all of it on top of me. 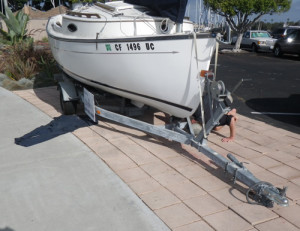 I was close enough to the wheel to not get pinned, just hit hard on the shoulder. In survival mode, I scrambled with cat-like speed out from under the trailer. My body cushioned the fall so the broker hardly felt a thing, but he quickly became concerned and later said I had looked pale.

The trailer’s jack stand had swiveled up and collapsed. I had not checked the pin in the jack assembly to make sure it was inserted, I had not placed any support under the trailer itself nor had I secured the wheels. I was nonchalant and luckily paid only a small price.

Most boats we inspect are hauled out on a Travel Lift or supported with wood blocks (under the keel) and jack stands (on the chines). Boats that are out of the water can fall (see “A Fall Story” on our web site) and I know that. Don’t take safety lightly; another set of eyes and a few questions, though irritating to boat yard personnel, won’t hurt as bad as a falling boat.

Luckily this was a small boat and most of my body (including my small brain) was out of harm’s way when it fell. The lesson I learned again, be safe, block the boat securely.

Don’t forget small boat safety! Davits and davit cables can fail, don’t get under the tender when launching or retrieving. I have witnessed a boat fall when a davit’s cable broke, be careful.

My meeting with my wife was moved to the Urgent Care and the concerned broker thoughtfully insisted on driving me. Instead of golf, I finished the survey on the little sailboat the following day (10/5/12). I hope this story helps remind me, other boating professionals and perhaps you, to not become complacent and let this enjoyable hobby or vocation cause anything but smiles.

* Gaff rig is a sailing rig (configuration of sails) in which the sail is four-cornered, fore-and-aft rigged, controlled at its peak and, usually, its entire head by a spar (pole) called the gaff. The gaff enables a fore and aft sail to be four sided, rather than triangular, and as much as doubles the sail area that can be carried by that mast and boom (if a boom is used in the particular rig). Additionally, for any given area of sail, the gaff rig will have a lower heeling moment than a triangular sail. “Wikipedia”

* Catboat A cat-rigged vessel with a single mast mounted close to the bow, and only one sail, usually on a gaff. “Wikipedia”