On Wednesday, September 26, 2012, I was having a normal day, surveying a 70’s era Ingrid 38 cruising sailboat, for a nice young man with plans on sailing the Indian Ocean. We finished the deck and cockpit and had just entered the cabin. I was in the engine space and my tall client was standing in the cabin looking aft at the engine. We had no idea how exciting the day was to become.

The client became distracted and I heard people yelling. I was blind to the action but he could see out of the companionway and something had caught his attention. For a few moments he couldn’t vocalize his thoughts. Eventually he said “that boat’s in trouble”, indicating a problem but not the nature of the problem. I asked him if they needed help and he again paused, and appeared almost frozen. Something was preventing him from normal communication and action. 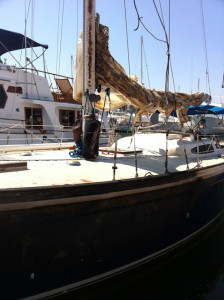 We were in Marina Cortez, on Harbor Island in San Diego; it was midday, clear and sunny. After several long moments (actually only a few seconds) he said “a boat is on fire” and I quickly exited the engine room to assess the situation. The Ingrid’s owner said “I’ll get an extinguisher”. After I saw the fire, I told him, “never mind the extinguisher, let’s go move some boats.” A sport-fishing boat located directly across the fairway and upwind was “fully involved” as the fire pros say. It was ablaze with flames jumping and smoke beginning to billow.

I have been involved with many boat fire claims after the fact, but this was only the second one I have witnessed. Several years ago I saw a boat aflame on a mooring in America’s Cup Harbor, by the time I saw it fire fighters were already there. This fire had just begun and was on the next dock. There were boats in the slips adjacent to the fire origin boat and I knew we could reduce the damage by moving the adjacent boats. Then I heard several explosions, I paused and reconsidered. “Maybe not” I thought for a moment, perhaps we should let them burn and stay at a safe distance.

I deduced that tanks had expanded and exploded and ran to help. By the time I arrived at the burning boat, one of the dock’s fire hoses was being discharged on the fire and a second dock fire hose joined in shortly thereafter. One of the neighboring boats had been cut loose and was drifting towards my client and the boat owner of the boat I was surveying, they helped gather and secure it. Moments later the other neighboring boat was on its way to safety, across the fairway.

One of the fire hoses was being manned by a guy in a wet suit, apparently a diver at work before volunteering for this job. I asked if he was okay or wanted relief, he said no, he was strong and steady. There was a lady using a smaller water hose, dousing the adjacent boats to prevent further damage. I noticed the lady from the office hustling down to the scene as well. 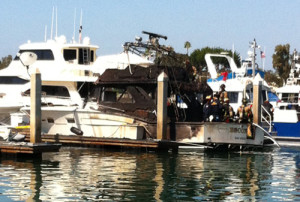 The boats that were removed included a Columbia sailboat and a Hatteras power boat; both were badly damaged, but appeared repairable. If they had been left much longer, the fire would have grown considerably and caused more damage. The boats were all approximately fifty feet long.

The wind was blowing down toward our dock and the smoke was thick. It was clear that the fire could have jumped docks if it had not been contained. The fire department arrived within a few minutes and a shiny new fire boat was soon pumping water onto the fire. When I returned to the boat I was surveying, I noticed they had deployed a fire hose on that dock as well and had apparently doused the two boats that came floating across the fairway, to prevent any flare ups.

I noticed local heroes reacting to an emergency, saving property and helping their fellow boaters. The gang of responders knocked down the fire, saved two boats and possibly many others. They all acted selflessly. The diver, the neighboring boater with the small hose, the marina office staff and numerous other responders deserve kudos! Thank you for your efforts!