So I am driving home last week, listening to the public radio station, and the economic reporter is using an analogy about jet packs. He says when he was a kid jet packs were the exciting invention for the future and we were supposed to have them readily available by now to fly over to a friend’s house. He said instead of jet packs we have the possibility of fueling our cars with algae, not as exciting.

Fast forward a few days to Saturday, April 28, 2012. I am in Newport Harbor, Newport Beach, California. I am being transported on a tender from Balboa Island to a boat on a mooring near the car ferry (that runs from Balboa Island to the peninsula) to do a job aboard a boat on a mooring. The job is done and I get back in the tender and what do my child like eyes behold, a man on a jet pack.

My client, who is driving the tender, is unfazed and simply and calmly states, yeah he’s out here all the time. 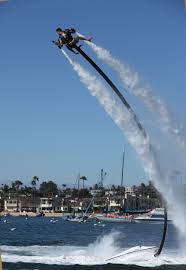 “What?” I exclaim! I absolutely must get a closer look, I am riveted and amazed. The jet flyer is hovering low to the water and then up 30 feet in the air. The flyer gets the attention of a small boat full of rambunctious young ladies and he returns the attention by tilting his water jet stream toward them in a flirtatious manner. The wisp of water spikes the volume of audible delight coming from the group in the boat.

I am equally rapt. I pull out my camera and plead for the operator to get me closer so I can take a picture of this flyer. He is cool. He is flying around Newport Harbor on a water jet pack. Finally a jet pack in action, tangible, practical? safe?…

I briefly researched the device on the internet this morning; it is called a Jet Lev R200. I assume the R200 is to make it sound science fiction-like or technological. On the Jet Lev web site the inventor, Raymond Li, is quoted “When I was 14 years old I saw James Bond fly a jet pack in the movie “Thunderball”, and have dreamed of flying one ever since.” Me too!

The Jet Lev Southwest (Newport Beach) web site (jetlevsouthwest.com) lists current pricing at $250 – $300 for the first flight and about $200 more for each further flight, where you can advance your skills to include “submarines” and “walk on waters”. The web site also uses words like, “safe” and “stable”, and phrases like “ease- of- use” and my favorite, “your dream of personal flight”.

That’s it, dreams of personal flight, just like Raymond Li, I have that dream and I am sure he and I are not alone. Sure most of those dreams did not include a jet pack, but now they might.

I continued my research and found out that there was an epic fail of the Jet Lev at a San Diego boatshow live on a Fox 5 San Diego TV news cast from July 2011 (http://gizmodo.com/5821541/dont-crash-your-jetpack-into-the-ocean-on-live-tv). The operator attempts to take off from the dock, bumps the reporter and then nose dives into the water. The news’ anchors reaction is hilarious and of course it brings up the question of safety, but the guy is out of the water and flying in an instant. The web site explains that he accidentally bumped the emergency kill button (as found on a personal water craft or small boat).

So in my exuberance, I tried to show my home made video to my two sons this morning. The 16 year old tells me he is sleeping and to go away. I don’t even get him to open his eyes when I bring the video to him on my lap top. My 14 year old is willing to watch my video and the professional videos on the web site, but has seen it somewhere in his “youtubing” in the past. Neither shares my enthusiasm; perhaps my 11 year old daughter will follow her dad when she gets home from her sleepover? My narration of my home made video of the jet flyer includes allusions to the Jetsons and Gilligan’s Island, lost on my children. Well I still have my shared (childhood) dreams with the announcer on PBS and I am certain that one warm summer day in 2012 I will be flying over Newport Harbor and I will pay the up charge for the Go-Pro video recording as a fond reminder and likely a great piece of personal comedic nostalgia for my children and theirs.