I arrived to the shipyard shortly after the 100+ foot steel yacht had been launched. The majority of the survey was completed while the vessel was hauled, but the client requested a sea trial and, surprise, the launch was delayed. This day was devoted to a sea trial, but another surprise would delay it once again.

The boat had been out of the water for several weeks, there was a transom extension, exterior paint job and a few new electronics were installed. The yard described the job as a “freshen up” versus a “refit”. The owner needed a marine survey report for his insurance carrier and wanted a survey to check on the condition of the boat after the yard was done.

Most of our condition and valuation (C & V) survey customers fall into one of two categories: those who want a marine survey and those who need one. This customer was the rare customer who was required to obtain a survey and took the opportunity to have a surveyor assess the boat fully. A survey performed in the water, out of the water and underway is more thorough than one that omits any of these procedures, and this client requested the full Monty. 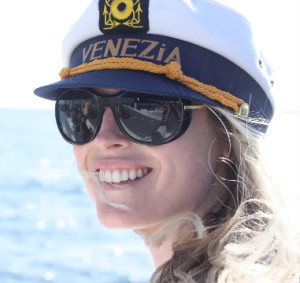 During the yard time the vessel had changed engineers but the captain had been with the boat for a long time and both were aboard for the sea trial. The new engineer was in the engine room. I began there, to check conditions before the sea trial commenced. An attractive steward was in the engine room as well, and perhaps she was a distraction, but the engineer was toiling away completely oblivious to the water in the bilge. These engines were mounted high above a deep bilge; three and a half feet of water had risen up to the bottom of the oil pans.

My mention of the water quickly changed the engineer’s focus from his previous job to the more pressing matter of dewatering the boat before the water rose any higher. Like most yachts of this size, the primary dewatering system was a pair of AC electric pumps that were coupled to a manifold system to allow them to serve various functions (fire or bilge) and to draw from different bilge compartments (separated by water tight bulkheads). The engineer opened the proper valves and energized the first pump, both of us initially thought this would be a short process and the sea trial would continue as planned.

I am somewhat accustomed to unexpected conditions in boats. We handle lots of damage claims and the sheer number of vessels we are on inevitably leads to our encountering problems. So I was initially unfazed and began my normal inspection process. After ten or fifteen minutes, I noticed the water level was still rising, now half way up the engines’ oil pans and decided to stop surveying and focus on the most pressing concern.

This event occurred in Mexico and the crew spoke English as well as I speak Spanish. Though my bilingual children and Spanish conversant wife find it humorous, my Spanish is not easily understood by a native speaker. The words flow out of my mouth as easily as the water was flooding the bilge, but their meaning was as unclear as the source of the water. Funny, I know what I am trying to say. The engineer attempted to bring the second pump on line, but he was having trouble with the stiff valves. I noticed the tool box and handed him tools which he used to move the stubborn valves. I found a large pipe wrench to replace the screw driver he was sticking through the valve handles. Now the water level was at the top of the engines’ oil pans and I was concerned because we were losing the battle.

I knew the engineer was new, he spoke less English than the Captain and the water level was still rising after two significant bilge pumps were energized. I found and alerted the captain of the problem. I then spoke with the yard manager, explained the situation and requested an emergency bilge pump. The yard manager was bilingual and quickly brought an emergency bilge pump, but the hose was too short. The closest point of discharge was out the transom “garage” door and the hose didn’t make it all the way. Another delay occurred while another section of hose was located, brought to the boat and coupled to the existing hose.

The emergency pump began dewatering the engine room bilge and the Captain examined the primary bilge pumping system. He noticed that there was nothing discharging from the discharge through hulls and examined the position of the valves. They were in the proper position, but the motors and tubes connected to them were warm; they were not pumping water. The Captain closed the valves, and then opened them slowly. The pumps took a prime and in no time the engine room bilge was dry.
The entire process took less than an hour, but the engines were partially cooled by external electric pumps which had been submerged and were rendered inoperative. The sea trial was postponed.
There are a few lessons in this story.

Know your systems and know how to check them for proper function. The new engineer knew the bilge pump system, but had not learned how to check them for function. He did not check the discharge, which would have quickly revealed the system was not pumping water. He did not note the warm pumps and tubes, indicating the pumps were not pumping water. The more knowledgeable captain recognized the problem and by priming the pumps, quickly dewatered the bilge.

Service the systems regularly, best done by adhering to a written maintenance plan. The second bilge pump’s valves were seized and obviously had not been maintained. Consider what “fire drills” your crew needs: emergency tiller handle installation, man overboard, abandon ship…..
Install a high water alarm, it is easy, inexpensive and is much better than discovering the high water level with your feet when you get out of bed.

The leak was quickly found once the water level was below the leak, leaks below the waterline are tough to find. The leak was from the propeller shaft seal’s priming system, it was opened and forgotten about. The lesson here…after launching a boat, pay attention…no, that’s not it.

As far as the engineer’s distraction, well this is a boating story, not a morality tale.