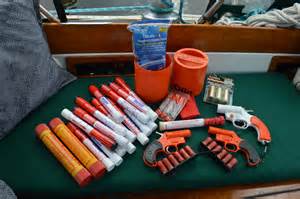 The most commonly thought of marine visual distress signal is the pyrotechnic flare.

In 1859 Martha Coston was granted a U.S. patent for a pyrotechnic night signal and code system. Today, recreational boaters in the U.S. are legally required to carry three day and three night distress signal flares. The flares must be labeled U.S.C.G. approved and must be current, they have 42 month service lives.

Pyrotechnic flares approved by the International Convention for Safety of Life at Sea (SOLAS) are much better than U.S.C.G. approved flares without a SOLAS designation. They shoot higher, last longer, have higher candela and cost much more.

Since most of us have never shot a parachute flare or ignited a hand held flare, smoke signal or dye marker, consider checking them out on YouTube.

Boaters can learn how and when to use the various types of distress signals. There are also many videos about laser flares or electronic visual detection signaling device (EVDSD). These devices are a no brainer in my opinion, not as a replacement for pyrotechnic flares, as they are not legal replacements, but as a supplement. They can be used for a much longer period of time and thus not necessarily only when another vessel or a plane is in sight. EVDSDs do not create as much pollution as pyrotechnic devices which are considered to be explosives and are hazardous material.

Never throw pyrotechnic flares overboard, in the trash or activate them in an area considered to be regulated water. In an interesting research experiment I contacted three local authorities and a large marine retailer and asked how to dispose of expired flares. Two provided the correct answer, but one provided the number for a local small retail company that is now defunct and the large retailer provided incorrect information, in fact the individual said the local fire department would not take the flares. In my area, Shelter Island, San Diego, fire station #22 (1055 Catalina Blvd.) will accept expired flares and most fire stations will do so.

Keeping older distress signal flares is common and a common recommendation on our survey reports. Most people just forget about them, but they are a legal requirement and expired flares do not meet the requirement. Many of us believe that expired flares will work and they may, however I once read an article in a non-commercial magazine (like Practical Sailor) that found the cheaper flares’ performance significantly decreased after their expiration date.

In my opinion, keeping a few extra flares (even if expired) is a good idea, but new SOLAS flares, an EVDSD and a few minutes of education on YouTube will increase our chance of both getting rescued and rescuing others in distress.