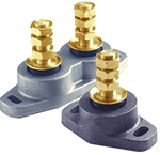 As a marine surveyor, I occasionally encounter problems with motor mounts, and I wondered if there was a more analytic (and less subjective) way to determine their condition. I spoke with several experienced marine mechanics, a distributor and a manufacturer.

The vulcanized rubber in flexible or soft motor mounts provides sound and vibration dampening. It is this rubber that is most commonly damaged. Apparently, a visual inspection is the only way to determine the condition of the rubber in the mounts. One mechanic mentioned using a durometer, but he had never used one. Petroleum products, heat and age cause damage to the rubber. The metal is most commonly damaged by corrosion. Mounts also suffer damage from improper installation, under-sizing, hard shifting, groundings and hard landings (for those of you with boats that fly).

Separation of the rubber from the metal, sagging and distortion are the usual indications of damaged rubber. High performance boats and some older yachts use solid mounts, with no dampening rubber.

Occasionally we find broken motor mount studs; a much more definitive indication of a problem mount. Amazingly of all of the broken studs we have found, none of the operators were aware of a problem as the other three mounts supported the engine load. We commonly find the “jam nuts” not properly secured against the adjustment nut. If there are two nuts on one side of the engine’s mounting flange, they should be touching.

So the next time you are “messing about” we encourage you to inspect your boat’s motor mounts. Some may need a mirror and a flashlight. Inspect the rubber, the stud, the nuts and the bolts securing the mounts to the engine bearer. Damage claims involving catastrophic motor mount failures are few, but they usually include significant water intrusion about the propeller shaft seal and chaos. A brief check of mounts along with your normal pre-start check may prevent something much more catastrophic.

The bad news, there is no objective inspection or test for motor mounts. The good news is if you keep the mounts clean and free of shock loads, they may outlast you.