My work truck was stolen recently, from my driveway. I couldn’t believe it, car theft really happens, and the truck had Christian & Company Marine Surveyors all over it! I felt violated but it gave me writing inspiration. Our experience assisting marine underwriters with theft claims shows how a little effort can prevent most thefts. 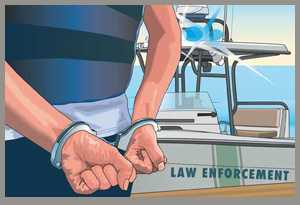 I can’t be sure, but I think my truck was left unlocked. The unlocked truck gave the thief opportunity. Theft happens to all size boats from tenders to trailer boats to mega-yachts. We can significantly reduce the likelihood of the theft of our boats or items from our boats by reducing opportunity and increasing the risk for the thief. We may not prevent theft, but we can help the thieves choose a different boat.

For boats kept in the water reduce opportunity for theft by keeping the boat entry doors and lazarette lockers locked. Make sure the hatches and windows are locked and store the key more creatively than most people do, i.e. hanging on a hook in a locker. Meet your neighbors, especially the live aboards, exchange phone numbers and watch out for each other. A boat stolen in Oceanside a few years ago was recovered off La Jolla after the neighbors alerted the owner to unusual activity aboard, and the owner alerted the authorities.

Security cameras (real or fake) are a fantastic deterrent to crime and real cameras are often used to solve crimes. Camera systems’ prices have come down significantly and they are easy to install. Signs announcing a theft protection system are a simple deterrent. An infra-red marina camera identified a thief recently in Mission Bay, the camera’s night time resolution was phenomenal.

The marina, yacht club or storage location of the boat is an important part of theft prevention. Basic security measures include locked gates, security guards and lights. I usually check in at the office but when I am “following” owners through locked dock gates I appreciate being challenged. Ask the stranger for a business card or send them to the office for a key. Leaving the gate ajar is an invitation to a burglar.
Some cruisers purposely let the exterior of their boats weather, so they don’t look like shiny beacons to thieves in foreign ports. We have surveyed many boats that appear neglected externally but are actually quite well maintained and equipped, but you may have to start a new class to win an award at the yacht club.

Simple ignition system protection devices, hidden battery switches and unavailable ignition keys make stealing the boat more difficult. Professional thieves are going to take what they want but the joy rider or opportunistic drunk can be thwarted and are far more common.

Component theft is more common and can happen to any boat stored ashore or afloat. The most commonly stolen items are high value, small and easily removed. Take the electronics home or lock them up, lock the outboard and keep the valuables out of sight. Fishing gear is a common target. Simply locking the lockers is an effective deterrent; after all, they are called lockers.

We see many trailerable boats stolen and stripped. This type of theft is best prevented by storing the boat in a safe place, locked gates, blocking them in with other vehicles, motion sensor lights, cameras, trailer locks and other visible theft deterrent devices will keep the thieves’ eyes moving to another boat. Many of these vessels are stolen from temporary storage locations that provided an easy target.

The truck story ended with a fair claim payment for a truck with over 270,000 miles, but the anger, lost time, lost money (deductible and depreciation applies) and energy was not worth it for me or for most people. I was most angry that the thief stole what I worked for. Shouldn’t thieves work for a living? Let’s make them work harder!