It is vitally important for the engine(s) to be cold prior to the sea trial. Ideally the engine(s) would not have been run for several days or longer. A pre-start inspection of the external surfaces of the engine and transmission and a visual inspection of the peripheral components is performed while the engines are cold. The fluid levels are checked and any stains below the engines are noted. Among normal findings are corrosion, exhaust leaks, seawater pump leaks, oil leaks and worn hoses. If engine and transmission identification tags are visible the model and serial numbers, horsepower and gear ratio are recorded. If the maximum load/no load rpms are recorded on the identification tags that information is obtained and used during the sea trial for comparison. The same inspection is performed on the generator(s). At the time the engines are started the engine hour meter(s) reading is recorded. The cold start of the engine(s) is critical and ideally, it is an immediate start when the starter is engaged. A slow, loafing start is noted. The opacity (density) of the smoke is observed upon startup and after the engine is warmed up. If the engine has multiple control stations the engine(s) “starts” and “stops” should be used from all stations. Audible engine alarms should be available at all stations. 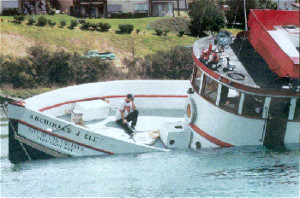 We always suggest that the current owner or representative operate the vessel away from and in to the dock. It is suggested that the potential buyer also test operate the vessel to assure its operation is normal and to begin learning the control systems. There is no better time to begin an education than on a sea trial and usually there is no better teacher than an owner who is intimately familiar with the vessel. During the sea trial we will test operate the engines from all control stations, the steering from all control stations and we will observe the engine gauges at all stations.

The transmission should be shifted and observed while shifting. Differences in the operation of the transmission from the norm or from each other are important to note.

All the electronics that require the vessel to be moving should be tested including the autopilot (set a course, hold a course, alter the course and hold the altered course), the GPS, knotmeter (compare speed to the GPS), fathometer/fishfinder/sonar, radar etc. and other control system components such as trim tabs and fin stabilizers should be tested underway.

The generator(s) should be test operated and loaded.

WHEN HAULED: When the vessel is hauled it is important, if possible, to inspect the vessel while wet. A wet surface will allow detection of blisters as a dry surface will limit. It is also important to have the hull bottom cleaned. Marine growth can hide blisters that will become magically apparent as the pressure washer removes the growth. It is our job as surveyors to request that the hull bottom be cleaned, if it is not cleaned upon haul out. It is our client’s responsibility to authorize the cleaning and the pay for the cleaning. It is most helpful if this necessity has been discussed prior to the point the vessel was hauled out, preferably when the survey is being scheduled.

Assure the communication is made with the current owner’s/seller’s representative so that all sailing system components, which you would like to test, are available prior to the sea trial. Raise all sails that you desire to inspect thoroughly. Raise the sails yourself, including rolling out and furling any furling systems. Check out the various hardware, sail to several different points of sail, tack, and gybe at least once.Operate the vessel with the autopilot under sail, set a course, hold a course, alter the course and hold the altered course.

Inspect the leads of the various running-rigging components and take the helm during the sail. Try to plan the sea trial during the time day likely to have wind and pray for wind.

Ask for the history of the vessel, including the previous owners, experience of the vessel geographically, significant events in the vessel’s history (submersions, fires, collisions, hard groundings, fires etc.), the age of significant components such as engines, transmissions, generators, exterior paint/gelcoat, teak decks, standing rigging, sails. Ask for disclosure statement including all known problems with the vessel’s hull structure, mechanical systems, electrical and electronic systems, tankage etc. Ask for the history of any blisters on the vessel and age of the anti-fouling paint. If major work has been performed, ask for documentation. Ask to see any old Marine Surveys.

If items are seen aboard during an inspection and there is any question that they are part of the sales transaction, discuss them with the seller’s representative.